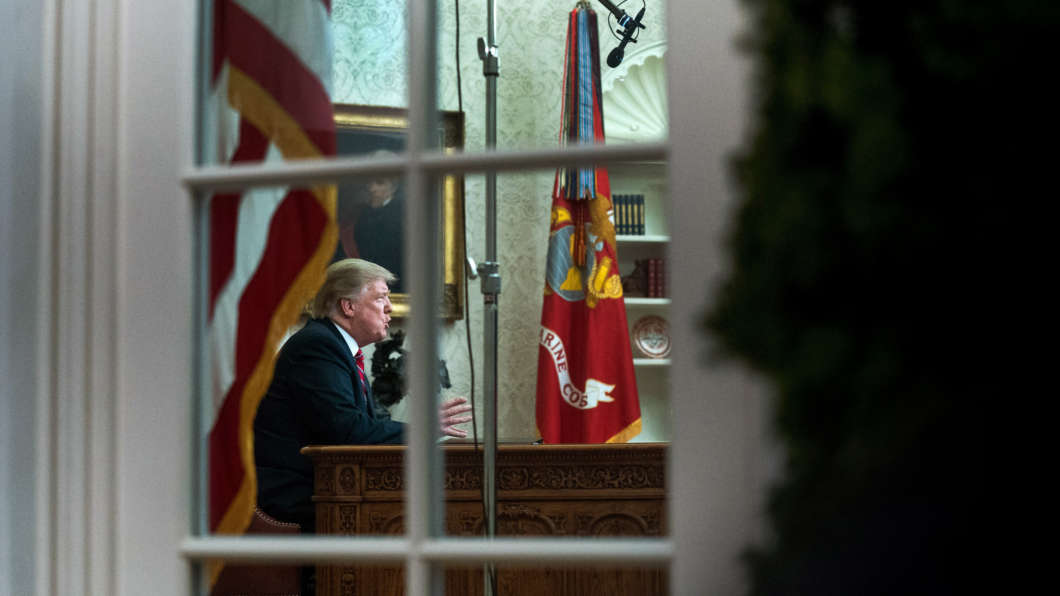 President Trump speaks to the nation in his first-prime address from the Oval Office of the White House on Tuesday.
Image credit: Pool

President Trump used his first prime-time address from the Oval Office to make the case for his controversial border wall. The president’s demand for $5.7 billion in wall funding — and Democrats’ opposition — has led to a partial shutdown of the federal government.

Here we check some of the arguments made by the president and top Democrats in their response. This post will be updated.

“There is a growing humanitarian and security crisis at our Southern border.”

Fact check: Illegal border crossings in the most recent fiscal year (ending in September 2018) were actually lower than either 2016 or 2014 and much lower than at their peak around 2000. The number of unauthorized border-crossers is also dwarfed by the number of people who overstay their visas. But there has been a spike in crossings in the past few months, topping 60,000 in both October and November. And while illegal crossings are still well below the levels of a generation ago, the makeup of the traffic has changed. There are now many more children and families from Central America, who present different challenges than single adults from Mexico.

Many of the Central American migrants are seeking asylum, citing a fear of violence or persecution back home. While the majority of these asylum claims are ultimately rejected, assessing them can take months or years. In the past, asylum-seekers were typically released into the U.S. during this period, a practice the Trump administration criticizes as “catch and release.” The administration wants to detain migrants while their asylum claims are adjudicated. This has led to overcrowded detention centers. And under a court order, young migrants generally cannot be detained for more than about 20 days. (The administration tried to get around that last year with its ill-fated and short-lived family separation policy, to allow indefinite detention of adults while children were turned over to the Health and Human Services Department or resettled with family members.) Importantly, most asylum-seekers turn themselves in to U.S. authorities, which they could do with or without a border wall.

Claim 2: Driving down jobs and wages

“All Americans are hurt by uncontrolled illegal migration. It strains public resources and drives down jobs and wages. Among those hardest hit are African-Americans and Hispanic Americans.”

Fact check: The effect of illegal immigration on wages has been studied extensively, and conclusions vary quite a bit. Because of the underground nature of the problem, hard evidence can be hard to come by. Some evidence exists that because illegal immigrants tend to be low-skilled, they compete with native-born workers and can lower wages for those at the bottom of the income scale. But they can also reduce the cost of production in some industries, which can mean lower prices for Americans as a whole. Indeed, many employers complain that in today’s tight labor market, the shortage of immigrant labor is driving up their costs. As for the president’s claim that illegal immigrants drain public resources, many studies have concluded that while illegal immigrants may also drive up the cost of government services in some places, they also make up for it by paying taxes.

“In the last two years, ICE officers made 266,000 arrests of aliens with criminal records including those charged [with] or convicted of 100,000 assaults, 30,000 sex crimes and 4,000 violent killings. Over the years, thousands of Americans have been brutally killed by those who illegally entered our country.”

Fact check: The president is right about the total number of arrests of immigrants with criminal records that ICE has arrested over the past two years. But that number alone is misleading, because many of those of immigrants have very likely committed immigration-related offenses rather than violent crimes as the president is suggesting.

Trump has frequently pointed to sympathetic crime victims to justify his crackdown on illegal immigration. But experts say the president’s rhetoric overstates the threat posed by immigrants, who tend to commit crime at lower rates than people who are born in the United States — including murder and other violent crimes.

“Our Southern border is a pipeline for vast quantities of illegal drugs. … My administration has presented Congress with a detailed proposal to secure the border and stop the criminal gangs, drug smugglers and human traffickers. It’s a tremendous problem.”

Fact check: The Trump administration has a well-documented history of using false or exaggerated statistics about crime and terrorism to justify its immigration policies. And that history is repeating itself. Studies have shown immigrants living in the U.S. illegally commit crime at a lower rate than native-born Americans. And according to the Drug Enforcement Administration, most illegal drugs imported to the U.S. from Mexico are smuggled through legal ports of entry. Only a small fraction comes through parts of the border that would be covered by a wall.

Claim 5: Wall paid for by Mexico

“The border wall would very quickly pay for itself. The cost of illegal drugs exceeds $500 billion a year — vastly more than the $5.7 billion we have requested from Congress. The wall will also be paid for, indirectly, by the great new trade deal we have made with Mexico.”

The president is referring to the United States-Mexico-Canada Agreement, which was signed by the leaders of the three countries on Nov. 30, 2018. In recent weeks, Trump has repeatedly claimed that the new pact would usher in huge economic benefits, essentially making up for the cost of the wall. The problem with that is twofold: First, the agreement has to be approved by Congress, and that’s not a sure thing, so presumptions about how much money it will bring in are premature. Second, many economists say the new agreement is at best a modest reworking of the North American Free Trade Agreement and are skeptical about its economic benefits. Typical was Phil Levy of the Chicago Council on Global Affairs, who wrote that “there is very little in the USMCA to suggest it will create an economic growth spurt in the United States.”

“Law enforcement professionals have requested $5.7 billion for a physical barrier. At the request of Democrats it will be a steel barrier rather than a concrete wall. This barrier is absolutely critical to border security.”

Fact check: The administration’s latest request — presented to lawmakers over the weekend — seeks $5.7 billion for 234 miles of “new physical barrier,” which works out to about $24 million per mile. That’s a shift from December, when Homeland Security said it wanted $5.7 billion to secure 215 miles of border but only 100 miles of that was expected to be a new barrier. The rest would go to restoring existing walls and fences. The switch from concrete to steel was not made at the request of Democrats.

In addition, the administration is seeking hundreds of millions of dollars for additional border guards, immigration judges, detention beds and “to ensure the well-being of those taken into custody.”

Senate Minority Leader Chuck Schumer: “Make no mistake. Democrats and the president both want stronger border security. However, we sharply disagree with the president about the most effective way to do it.”

Last week, House Speaker Nancy Pelosi condemned the president’s proposed border wall as costly, ineffective and immoral. “We’re not doing a wall,” Pelosi said. “A wall is an immorality between countries.” Though, as the president noted, congressional Democrats including Schumer have at times supported border barriers in the past. Nearly 700 miles of wall and fencing have already been built along the U.S. border with Mexico since 2006. Some have argued that where walls make sense, they have already been built and where they haven’t been built, they don’t make sense. Each party is seeking to blame the other for the partial government shutdown. According to a new Reuters/Ipsos Poll, 51 percent blame the president, an increase of 4 points from a similar poll just before Christmas. The same poll found only about about 4 in 10 Americans support the idea of additional fencing along the border, and support has fallen since 2015. Among Republicans, however, support for the wall is stronger, with 77 percent supporting additional fencing and 54 percent approving of a shutdown as a means to that end.