FACT CHECK: Trump Says ‘A Lot Of Wall Has Been Built’ As He Demands We Build More 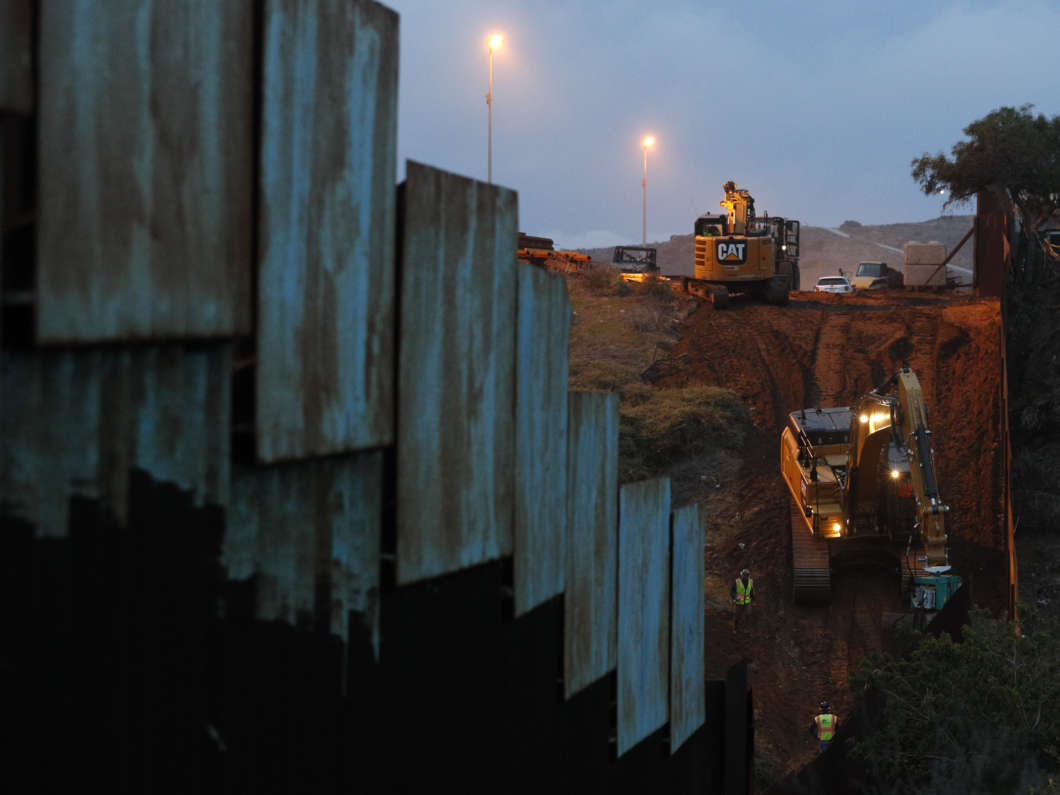 Contractors work to reinforce a section of the U.S. border wall in San Diego where scores of Central American migrants have crossed illegally in recent weeks, shot through the fence from Tijuana, Mexico.
Image credit: Rebecca Blackwell

In an uncommonly contentious public exchange in the Oval Office with House and Senate Democratic leaders, President Trump made several remarks about the southern border with Mexico justifying his demand for billions of dollars to build a wall to restrict illegal immigration.

“One thing that I do have to say is: Tremendous amounts of wall have already been built, and a lot of — a lot of wall. When you include the renovation of existing fences and walls, we’ve renovated a tremendous amount and we’ve done a lot of work. In San Diego, we’re building new walls right now. And we’ve — right next to San Diego, we’ve completed a major section of wall and it’s really worked well.”

After promising voters that Mexico would pay for the border wall, the president has sought $25 billion from Congress to fund the project.

Despite Republican majorities in both houses of Congress, lawmakers have not approved such funding. In 2017, the president managed to secure about $1.6 billion for border protection projects, but they are primarily for fortifying existing border fencing, not expanding the current wall.

That appropriation by Congress did not authorize using the money for the border wall prototypes Trump has promoted.

The president is demanding $5 billion more for wall construction. Democrats are proposing to spend $1.3 billion on border security overall.

Leaving aside the semantic difference between a wall and a fence, Trump is correct that fencing in San Diego, for example, significantly reduced “illegal traffic” when originally built decades ago. It also pushed border-crossers east, away from coastal San Diego, to areas where the fencing is less robust. Partly as a result, thousands have perished trying to trek through deserts and mountains.

The other locales Trump mentioned do have many miles of existing fencing that is being replaced or strengthened. To date, the fencing is a hodge-podge of projects covering about 650 miles.

In November, the government announced a $324 million contract for 32 miles of “primary pedestrian replacement wall” in Arizona.

A 20-mile border wall replacement project in Santa Teresa, N.M., was announced in April 2018. The cost is reported to be $73.3 million.

A 6-mile “levee wall system” is set for construction in Texas’s Rio Grande Valley beginning in February 2019. It will cost $145 million.

A 14-mile “border wall construction project” along the border in San Diego was announced in June 2018. The project actually will replace an “eight-to-10 foot high scrap metal wall with an 18-to-30 foot bollard-style wall topped off with an anti-climbing plate.” The cost will be $147 million.

The dramatic declines in “illegal traffic,” as the president put it, appear to reflect the long term impact of fencing and other factors that go back to the 1990s.

The larger picture is more complicated. Border apprehensions — an indicator of overall unauthorized border crossings — have declined since 2000 when monthly totals were as high as 220,000. That same year 1.6 million unauthorized border-crossers were detained.

Spending on border protection, on technology as well as on personnel, climbed under both presidents Bush and Obama.

In FY 18, which ended in September, 521,090 people were apprehended at southwest border.

At the same time, monthly apprehensions are climbing. More than 51,000 people were captured at the southwest border in November, 2018. That’s a 78 percent increase over the same period last year. Yet it still far lower than the monthly totals in 2000.

The Pew Research Center finds that far fewer Mexicans are attempting to enter the U.S. and more Central Americans are making the trek, especially families with children.

“A lot of the people that wanted to come into the country, and really, they were to come in no matter how they wanted to come in — they were going to come in even in a rough way — many of these people are leaving now and they’re going back to their countries: Honduras, Guatemala, El Salvador, and other countries. They’re leaving. If you noticed, it’s getting a lot less crowded in Mexico.”

There are preliminary reports that the migrant caravan has diminished in strength as many have chosen to return home. As KPBS’s Jean Guerrero reports, “hundreds” have become disillusioned with the difficulty of entering the U.S. as asylees and have taken transport back to their native countries. Still, several thousand remain in Tijuana, Mexico where they are taxing local resources. There’s no evidence that Mexico as a whole is getting a lot less crowded.

In a tweet before the Oval Office meeting with Trump said:

“People do not yet realize how much of the Wall, including really effective renovation, has already been built. If the Democrats do not give us the votes to secure our Country, the Military will build the remaining sections of the Wall. They know how important it is!”

The Defense Department said in a statement Tuesday that while there are no current plans for the Pentagon to build the border wall, it could become involved in “border barrier projects.”

“To date, there is no plan to build sections of the wall. However, Congress has provided options under Title 10 U.S. Code that could permit the Department of Defense to fund border barrier projects, such as in support of counter drug operations or national emergencies.”