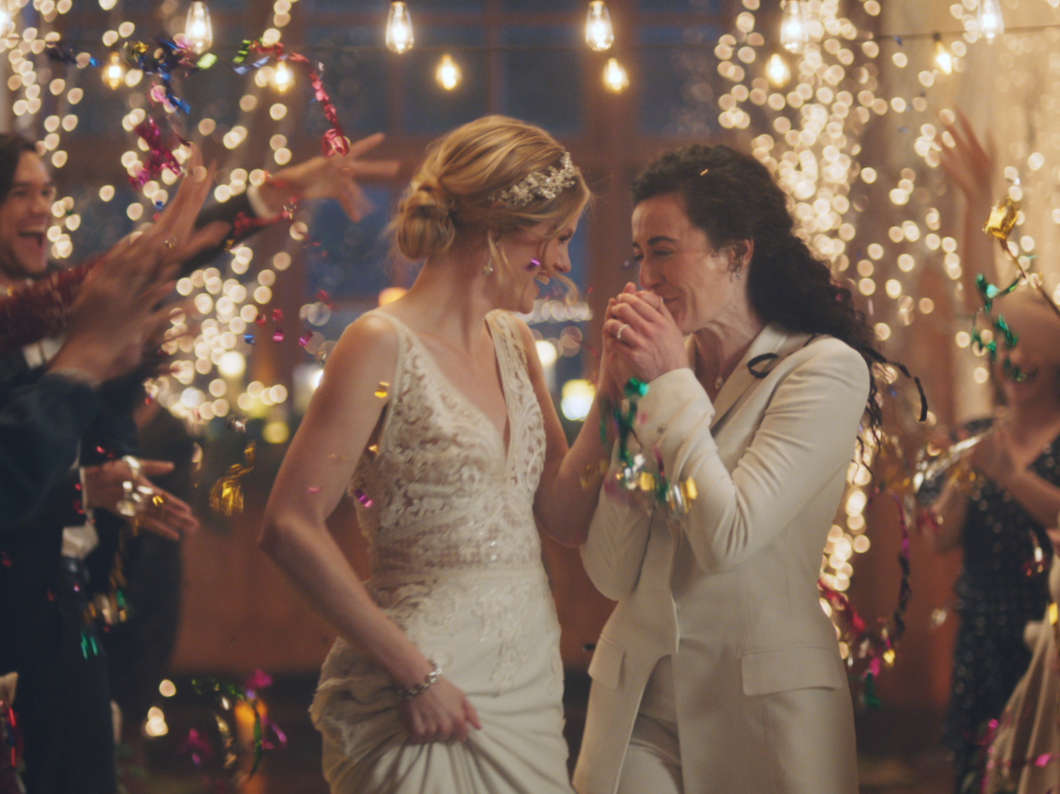 The Hallmark Channel is embroiled in controversy after it pulled an ad by wedding site Zola, which shows a lesbian couple getting married and sharing a kiss.

Facing a barrage of criticism for pulling ads featuring a lesbian couple from its airwaves, the Hallmark Channel has reversed course, and says it will now work to “reinstate the commercials.”

The ad for the wedding planning site Zola shows a couple at the altar, wishing they had used the service before their big day.

“Do you think Zola could have made planning your perfect wedding easier?” asks the officiant.

“We do!” The two women say, before kissing and walking down the aisle as a married couple.

Hallmark pulled the ad and three others featuring the couple after pressure from One Million Moms, an organization which says the ad promotes homosexuality. The group, a division of the conservative American Family Association, cited complaints from an online complaint board about the channel, one which said: “Please Hallmark … we r fed up with having the gay agenda crammed down our throats! You are one of the few channels we thought we would not have to deal with this issue!”

Late on Sunday, the Hallmark Channel released a statement apologizing for the ad’s removal, saying it “has been agonizing over this decision as we’ve seen the hurt it has unintentionally caused.” Taking the ad off the air was “the wrong decision,” the network said.

“Hallmark will be working with GLAAD to better represent the LGBTQ community across our portfolio of brands. The Hallmark Channel will be reaching out to Zola to reestablish our partnership and reinstate the commercials,” according to the statement.

Hallmark originally said that it chose to remove the ads because the controversy was a distraction. “The debate surrounding these commercials on all sides was distracting from the purpose of our network, which is to provide entertainment value,” it said in a statement to the Associated Press by Molly Biwer, senior vice president for public affairs and communications.

Zola submitted six ads to Hallmark, and all had been airing since Dec. 2. The company says Hallmark did not object to an ad in which a heterosexual couple was seen kissing, but flagged the four ads that included the lesbian couple. Zola has since pulled its other ads from the channel.

“The only difference between the commercials that were flagged and the ones that were approved was that the commercials that did not meet Hallmark’s standards included a lesbian couple kissing,” Zola’s chief marketing officer, Mike Chi, said in a statement. “All kisses, couples and marriages are equal celebrations of love and we will no longer be advertising on Hallmark.”

GLAAD President and CEO Sarah Kate Ellis called the decision hypocritical and discriminatory. “LGBTQ families are part of family programming,” she said in a statement to Deadline. “Advertisers on The Hallmark Channel should see this news and question whether they want to be associated with a network that chooses to bow to fringe anti-LGBTQ activist groups, which solely exist to harm LGBTQ families.”

Netflix, which has pushed hard into Hallmark’s market as a provider of feel-good holiday movies, threw shade at the company on Saturday.

“Titles Featuring Lesbians Joyfully Existing And Also It’s Christmas Can We Just Let People Love Who They Love,” it wrote on Twitter, referencing Netflix’s hyper-specific content categories. The tweet was accompanied by a still that trumpeted its own approach to LGBTQ content: a scene of two girls kissing in the high school holiday movie Let It Snow.