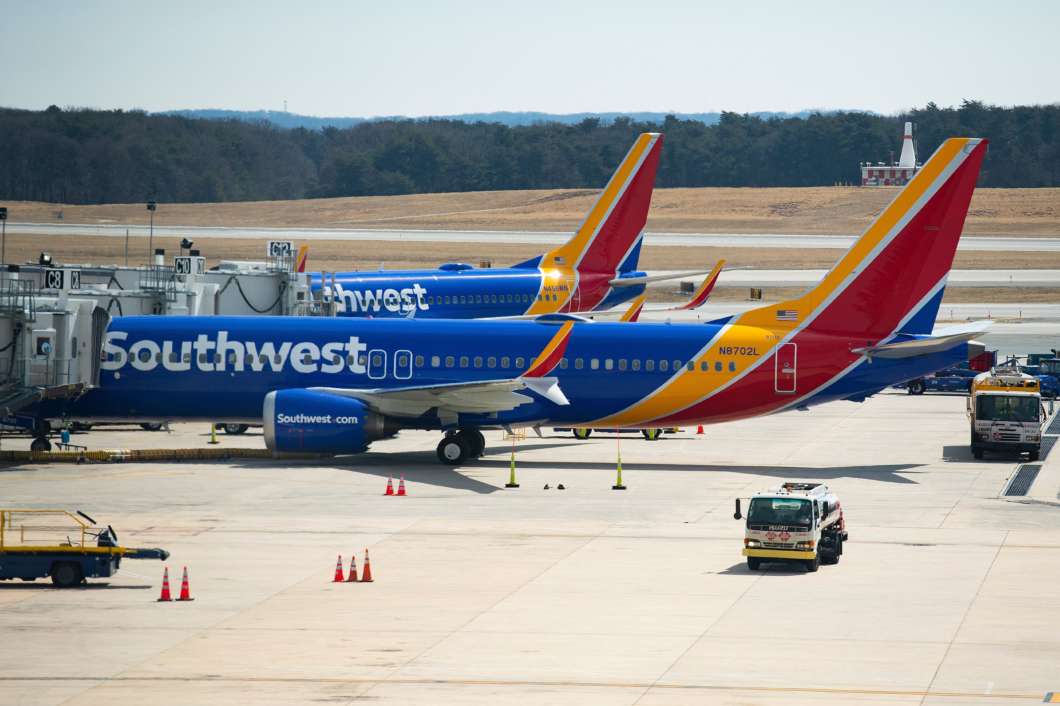 A Boeing 737 Max 8 flown by Southwest Airlines sits at the gate at Baltimore Washington International Airport on Wednesday. "The grounding will remain in effect pending further investigation, including examination of information from the aircraft's flight data recorders and cockpit voice recorders," the FAA said in a statement.
Image credit: Jim Watson

The Federal Aviation Administration says it is temporarily grounding all Boeing 737 Max aircraft operated by U.S. airlines or in U.S. territory.

The announcement Wednesday afternoon follows decisions by many other countries to ground the planes after 157 people died in Sunday’s crash of an Ethiopian Airlines 737 Max 8.

“The grounding will remain in effect pending further investigation, including examination of information from the aircraft’s flight data recorders and cockpit voice recorders,” the FAA said in a statement. “The agency made this decision as a result of the data gathering process and new evidence collected at the site and analyzed today. This evidence, together with newly refined satellite data available to FAA this morning, led to this decision.”

The emergency order is effective immediately. Any Boeing 737 Max 8 and Max 9 planes that were in flight when the order was issued “may proceed to and complete their soonest planned landing” — but they are not permitted to take off again. The order remains in effect until the FAA rescinds or modifies it.

The FAA says it made the decision on the basis of new information it discovered in the course of investigating wreckage from the Ethiopian Airlines Flight 302. The agency says there are 74 Boeing 737 Max 8 and Max 9 planes registered in the U.S., and 387 worldwide.

In a statement Wednesday, Boeing said it “continues to have full confidence in the safety of the 737 MAX.”

“However, after consultation with the U.S. Federal Aviation Administration (FAA), the U.S. National Transportation Safety Board (NTSB), and aviation authorities and its customers around the world, Boeing has determined — out of an abundance of caution and in order to reassure the flying public of the aircraft’s safety — to recommend to the FAA the temporary suspension of operations of the entire global fleet of 371 737 MAX aircraft.”

For days, the FAA had said the planes are safe to fly. Major U.S. airlines such as Southwest— which uses 34 of the Boeing 737 Max 8 aircraft — also expressed confidence in the plane.

Southwest seemed to indicate in a statement Wednesday that it had been caught off guard by the U.S. decision to ground the planes, saying the airline is “aware of media reports stating that the Boeing 737 MAX 8 fleet will be grounded in the United States. We are currently seeking confirmation and additional guidance from the FAA and will respond accordingly in the interest of aviation safety.”

American Airlines said it had been informed earlier in the day that the entire Boeing 737 Max fleet would be grounded “out of an abundance of caution.” The emergency order will affect 24 of the airline’s planes.

The FAA said Monday that it would require Boeing to improve how the 737 Max flight control systems work, along with other design changes.

After Sunday’s crash, Ethiopian Airlines grounded its four remaining 737 Max 8 planes. Dozens of countries, including Germany and China, also grounded their airlines’ 737 Max 8s. In some places, such as India, Australia and the European Union, aviation authorities have banned the entire 737 Max family of planes from their airspace.

Canada took action Wednesday, with Transport Minister Marc Garneau announcing restrictions barring “any air operator, both domestic and foreign,” from flying the Boeing 737 Max 8 and 9 through Canadian airspace. Air Canada has taken delivery of 23 of the 737 Max planes, according to Boeing.

Despite previous reassurances in the U.S. about safety, concerns have continued to mount. Peter Goelz, a former managing director of the National Transportation Safety Board, told NPR:

“I have to say that yesterday was the first time I started to really have concerns myself, because I’ve worked with the British investigators and regulators. I’ve also worked with the German investigators. And I have the highest regard for them. These are not folks that would make haphazard judgments. So, I am concerned that some of the finest regulatory and investigative groups have now called for the grounding.

“I am beginning to be concerned about this airplane.”

Describing how the FAA functions, Goelz said the agency — which has sent a team of investigators to the crash site in Ethiopia — is “data-driven” and doesn’t make decisions on anecdotal evidence. “They really have a close working and regulatory relationship with Boeing,” he said.

The U.S. aviation system is essentially governed through cooperative and voluntary relationships between the government and manufacturers, Goelz said.

Those questions include speculation about whether Boeing executives might have tried to influence the Trump administration in an effort to tamp down safety concerns about the 737 Max 8 — the fastest-selling plane in Boeing’s history, with more than 5,000 ordered.

Boeing CEO Dennis Muilenburg has spoken directly to Trump about the crash, according to Reuters, which notes that the two men have also spoken several times in the past — including negotiations over the price of the new Air Force One. The news agency also notes that acting Defense Secretary Patrick Shanahan was a longtime Boeing manager. And Nikki Haley, Trump’s former U.N. ambassador, has been nominated to join Boeing’s board.

The questions are surfacing months after U.S. pilots criticized Boeing in the wake of the Lion Air disaster, saying the plane-maker had not provided enough information or training about a critical aspect of its new flight control system, as NPR’s David Schaper reported in November.

The pilot of Ethiopian Airlines Flight 302 reported having flight control problems with the Boeing 737 Max 8 in the minutes before it crashed, airline CEO Tewolde GebreMariam says, providing new details about the disaster that killed 157 people on Sunday.

Pilot Yared Getachew, who had more than 8,000 flight hours of experience, “was having difficulties with the flight control” and requested a return to the airport in Addis Ababa, GebreMariam told CNN, citing recordings of communications between the plane and air traffic controllers.

Clearance for an immediate return was granted. But the plane didn’t make it back, crashing just six minutes after takeoff and stoking concerns about Boeing’s new Max 8 passenger jet — which was involved in another deadly crash under similar circumstances in Indonesia less than five months ago.

In both disasters, flight tracking data shows the pilots struggled to keep their aircrafts’ noses up and maintain altitude — an issue that U.S. regulators sought to address late last year, sending an emergency directive for all Boeing 737 Max 8 and Max 9 planes and warning of an “unsafe condition” that could lead to “excessive nose-down attitude, significant altitude loss, and possible impact with terrain.”

The Federal Aviation Administration ordered changes to the planes’ flight manuals and procedures in November — and Ethiopian Air says it followed those guidelines.

“There was also a briefing on the AD,” the CEO said. “So yes, the pilots were well-briefed on the airworthiness directive.”

“In two cases, pilots flying in the U.S. late last year had their planes pitch down unexpectedly after departures. Both times, the crew disengaged the autopilot and were able to keep flying safely,” NPR’s Russell Lewis reports. “In a third report, a pilot complained that the Boeing 737 MAX’s flight manual was inadequate and ‘almost criminally insufficient.’ ”

On Tuesday, the Allied Pilots Association, which represents American Airlines’ 15,000 pilots, issued a statement saying the union “remains confident in the Boeing 737 Max and in our members’ ability to safely fly it.”

The group said its pilots “have the necessary training and experience to troubleshoot problems and take decisive actions on the flight deck to protect our passengers and crew.”

While the union endorsed the continued use of the 737 Max, it added, “The flying public should also be aware that American Airlines’ Boeing 737 Max planes are unique.”

“The two dozen 737 Max aircraft in the American Airlines fleet are the only ones equipped with two AOA [Angle of Attack] displays, one for each pilot, providing an extra layer of awareness and warning,” the union said.

Those displays could be crucial in avoiding a sudden downward pitch, which Boeing and the FAA have acknowledged as a risk in the airworthiness bulletin that was issued shortly after the crash of Lion Air Flight 610.

The airworthiness directive said Boeing had found the automated anti-stall system on its 737 Max 8 and Max 9 models can be triggered by a sensor reporting an erroneously high angle of attack — meaning the system believes the nose is too high and the plane is stalling, even though it’s not.

The problem presents “a potential for repeated nose-down trim commands,” the directive states, noting, “This condition, if not addressed, could cause the flight crew to have difficulty controlling the airplane” and possibly resulting in a crash.

The investigation into the Ethiopian crash is still in its early stages, and experts have warned against drawing conclusions, despite similarities between the two deadly disasters. The Ethiopian Airlines plane’s digital flight data recorder and cockpit voice recorder were recovered Monday, and GebreMariam said they will be sent overseas for analysis, likely to either the U.S. or a European country.