Explosion In Downtown Nashville, Believed To Be ‘Intentional,’ Injures At Least 3 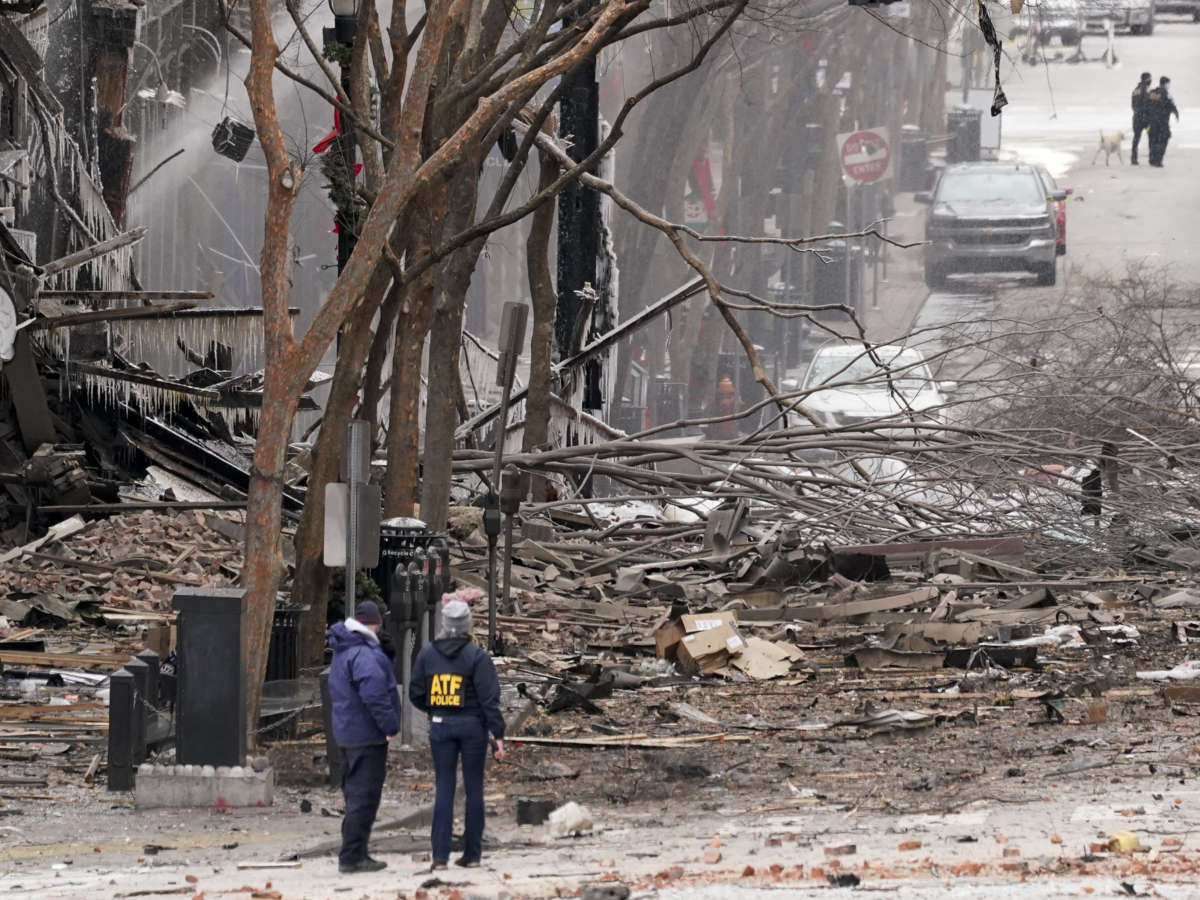 Emergency personnel work near the scene of an explosion in downtown Nashville, Tenn., on Dec. 25.
Image credit: Mark Humphrey

Authorities believe the explosion was “an intentional act.”

Police responded to reports of shots fired in the area at about 5:30 a.m. CT, when they encountered a recreational vehicle parked in front of the downtown AT&T building.

The Metropolitan Nashville Police Department says a recording believed to be coming from the RV warned that a potential bomb would be detonated within 15 minutes and that those in the area should evacuate. The department released an image of the RV before it exploded.

Police requested a bomb squad to respond, and had begun evacuating the area when the RV exploded at 6:30 a.m. local time. The blast was felt for miles.

Small fires broke out on the debris-filled streets as alarms sounded. One officer was knocked to the ground by the blast, and another suffered hearing loss. At least three people were transported to hospitals with non-critical injuries, according to The Associated Press. One of them was the officer knocked to the ground.

There were no confirmed fatalities as of Friday evening, city officials said at a press briefing. Police Chief John Drake said investigators found tissue at the scene that could possibly be human remains, which is being tested to confirm.

Due to the Christmas Day holiday, the streets were largely vacant at the time of the explosion.

“Any other morning, it would have been a much worse story,” Nashville Mayor John Cooper told reporters.

At least 41 buildings were damaged, some severely, Cooper said on Friday evening.

He added that a downtown curfew will remain in place until 4:30 p.m. local time Sunday, and parts of the area will remain closed to the public while authorities search the scene for evidence.

The city will work with FEMA to help those affected and to rebuild, Cooper said, though officials did not specify how many people were displaced by the blast.

The FBI is now leading the investigation, working with local police and the Bureau of Alcohol, Tobacco, Firearms and Explosives. The agency asks for those with information to get in contact. Investigators said they are gathering leads and evidence from the scene, including from street and building security camera footage. They offered no motive for the explosion. Later in the day, Drake said there had not been any previous known threats to the city.

“We will supply all of the resources needed to determine what happened and who was responsible,” Tennessee Gov. Bill Lee said in a statement. “We thank all of our first responders who acted so quickly this morning.”

The explosion occurred in an area packed with bars, restaurants and entertainment venues — before the pandemic, a popular destination.

AT&T’s services were disrupted, causing outages for some 911 lines, member station WPLN reported. The Federal Aviation Administration temporarily halted flights out of Nashville International Airport because of communications issues, the airport said in a tweet.

The Nashville Fire Department evacuated the downtown riverfront, according to WPLN, and later responded to a building that reportedly caught fire.

“It is hard to see so much glass, litter, damage and debris,” Cooper said. “It looks like a blast site, which is hard to see on one of our historic streets.”

Buck McCoy, a nearby resident, streamed what he saw on Facebook Live. Footage shows a damaged apartment unit, with the windows blown out and alarms sounding.

The room is seen flooding after the sprinklers engaged, with a small fire in the nearby street.

President Trump was briefed about the explosion and will be regularly updated, White House spokesman Judd Deere said in a statement.