Exploring the Clotilda, the last known slave ship in the U.S., brings hope 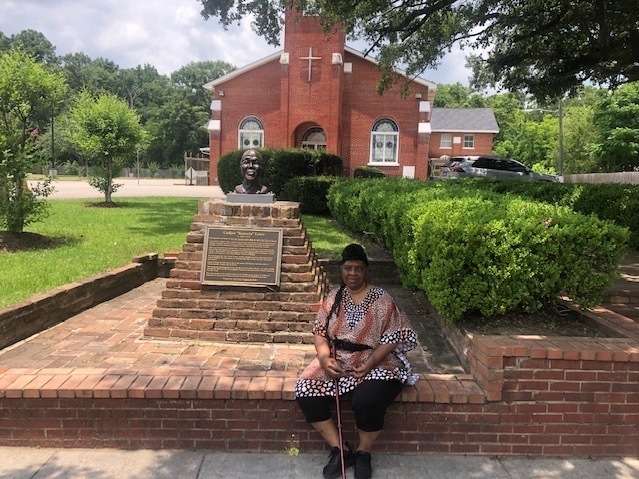 Vernetta Henson sits outside Union Baptist Church in Africatown. The church was started by Clotilda survivors in 1869. To her left is the bust of Cudjoe Lewis, one of the community's founder.

MOBILE, Ala. — Juneteenth has long had special meaning for the descendants of the last slave ship known to come to the United States, the Clotilda. People like Vernetta Henson and Darron Patterson of Mobile, Ala.

They’re descendants of Polee and Rose Allen, who were among the more than 100 kidnapped Africans a wealthy Alabama plantation owner smuggled into Mobile aboard the Clotilda 50 years after the Atlantic slave trade was abolished, and then sunk the ship to bury evidence of the crime.

Since the shipwreck was found three years ago, there’s been new focus on the Clotilda survivors and the community they founded after emancipation.

“You are officially in Africatown,” she says.

It’s bound by railroad tracks on one side, and water on the other three.

She points out an empty storefront, and where there was once a hotel. There’s no commerce here anymore – only heavy industry and a busy highway cutting through the center of the neighborhood.

A cemetery sits on a hill by the highway, gravestones facing east toward Africa.

Henson’s great-great grandparents — Polee and Rose Allen — were captured in Dahomey (now Benin) in West Africa and brought to the U.S. on the slave ship Clotilda in 1860. They were freed by Union soldiers at the end of the Civil War and helped found Africatown.

They never made it

“I’m going to show you some of the shotgun houses they built,” she says. “They were trying to get close to the water. They felt like they could use that water and go back home.”

Back home to Africa. But they never made it, instead preserving their homeland’s language and traditions in a self-governed enclave of family homes in about a five- mile area.

Henson, who is 73, says when she was young, Africatown was a vibrant community with a population of more than 10,000. Today, fewer than 2,000 residents remain. And many homes are abandoned and boarded up, showing years of neglect.

There’s new scrutiny on what’s become of Africatown since journalist Ben Raines discovered the Clotilda in the Mobile River in 2019. Work is underway to preserve it as a key artifact of American history.

And the wooden schooner is evidence.

“This was a crime,” she says. “It had been illegal to import slaves since the early part of the 19th century.”

She says the Clotilda passage is the last recorded incident of people bringing slaves into the United States.

“And then we have the ship and it’s in a fragile condition, but the vast majority of it is still there and it’s pretty amazing,” Hathorn says.

The story goes that on a bet, plantation owner and ship builder Timothy Meaher hired a captain to bring kidnapped Africans to Mobile even though the Atlantic slave trade was illegal. With federal prosecutors on his tail, the Clotilda was scuttled up river and set afire to hide evidence of the voyage. But the muddy water preserved the vessel for 150 years.

Archeologists got their first complete look at it during a research excursion in May funded by a $1 million dollar grant from the state of Alabama.

“The most important thing we learned is it’s in at least two pieces,” says Hathorn.

Part of the stern has broken away and is buried in mud. Researchers used sonar to map the lay of the ship, gathered samples, and are monitoring river flows. It’s all part of an effort by the Alabama Historical Commission to determine whether it’s feasible to raise the vessel.

“It would be very irresponsible to destroy it in the process of trying to preserve it,” Hathorn says.

Divers were able to pull up some artifacts including a piece of decking, and a cast iron steering mechanism with a bit of rope on it. Those artifacts are now being preserved at the History Museum of Mobile and will eventually be on display at the Heritage House Museum – a new facility that is under construction in Africatown that will tell the story of the Clotilda.

It’s one of several developments centered on this history.

Work has begun to create a federally-recognized Blueway along Africatown’s waterfront, for instance. And the Clotilda is the subject of new films, and a song by Blues singer Shemekia Copeland called “Clotilda’s On Fire.”

“People still come from miles around to praise the folks of Africatown who rose from the ashes of sad history to stand unchained, proud, and free,” she sings.

“We want to restore this community to its rightful place in history,” says Darron Patterson, President of the Clotilda Descendants Association.

He says for too long the slave history of Mobile was hidden. Patterson is the great-great grandson of Polee Allen. But growing up, his family kept that heritage a secret, fearing it was too dangerous to talk about. In part, he says, because the wealthy descendants of the slave trader Timothy Meaher remained powerful and owned much of the land in and around Africatown. And they still do.

“There’s a [racial] reckoning going on in the world,” he says. “And who better to be at the forefront of that discussion than the voice of the Clotilda descendants?”

He thinks with the right investment, Africatown could be as big a draw for Mobile as the tourism boom Montgomery has experienced with the opening of the Equal Justice Initiative’s Peace and Justice Memorial, which remembers thousands of lynching victims.

While pushing for public investment, Clotilda descendants are also digging deeper into their heritage, and finding inspiration in the resilience of the Clotilda survivors.

Genealogist Lew Toulmin has been working with the group.

“You may think it’s kind of odd that a white guy whose ancestors were slave owners and who fought vigorously for the Confederacy would be so interested in black genealogy,” he says. “But I don’t really see it as a contradiction.”

Toulmin is a retired policy consultant in Maryland, but is originally from Mobile. His family founded the town of Toulminville not far from Africatown. He says he never heard about the Clotilda as a child but wants to amplify the story today.

“Because we know better now,” says Toulmin. “I think it helps me and anybody who would read my stuff [to] understand some of the horrors that these folks went through in slavery.”

The keeper of the flame

He recently connected with Vernetta Henson on a video phone call to compare notes on what they’ve uncovered.

“She’s the keeper of the flame,” Toulmin says.

Vernetta Henson has collected scores of family obituaries, records that Toulmin uses to create family trees and document the lives of the Clotilda survivors.

After emancipation, the Africatown settlers continued to work for the Meaher family that enslaved them and used their wages to acquire land and lumber to build homes, and plant farms.

“They had to devise a way to survive rather than to live,” says Henson. “That was their main function learning how to survive.”

Toulmin has helped Henson fill out the story of her great-great grandfather Polee Allen’s influence.

“He bought two acres early on and he built his own house with his own hands, but with help from other people,” says Toulmin.

Learning all this fills Henson with a sense of pride.

“Golly, we really did have a big family that contributed a lot to the American dream.”