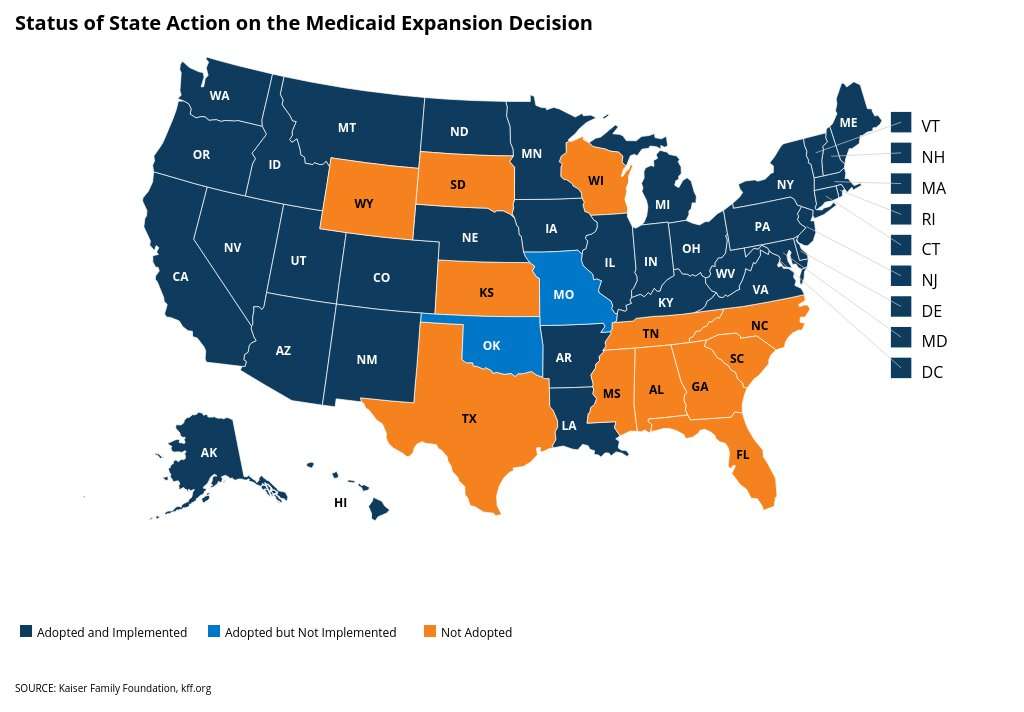 Florida is one of 14 states that have not expanded Medicaid (Source: Kaiser Family Foundation).

The COVID-19 pandemic and recent federal incentives have reignited the debate in Florida on whether or not to expand Medicaid.

The expansion was made available through The Affordable Care Act. Florida is one of 12 states that have not adopted the expansion.

The Medicaid expansion would address a coverage gap of Floridians who have no path to affordable healthcare.

“So there are people…adults without dependent children as well as parents that have income above the current Medicaid threshold that are not eligible for Medicaid and they can’t get subsidies in the marketplace,” she says.

Rudowitz says under the current Medicaid program, the federal government would pay 90% of the cost of expansion. The recently-passed American Rescue Plan allows states who expand Medicaid to get an additional five percentage points for their traditional program, which Rudowitz says is much larger than the expansion population.

“All states would see a net fiscal benefit to adopt the expansion,” she says. “So the new revenue from the federal government would outweigh the new costs for expansion.”

Swerlick says the cost would be more than offset by saving in other budget areas such as mental health and people who are “medically needy.” She says federal government projections show that 1.1 million Floridians could obtain insurance through the expansion.

“We currently have about 2.7 million uninsured Floridians, so Medicaid expansion would make a very sizable dent in our uninsured numbers,” Swerlick says.

Harmatz says people who fall into the coverage gap are mostly people in the tourism and construction industries who don’t have health insurance through their jobs and can lose work because of injury.

“Maids who use their hands a lot get carpal tunnel and can’t do that work, or construction workers who need a knee replacement,” she says. “And so they can’t return to the workforce until they get it treated, and these are the types of treatments not available at primary care centers.”

Aboraya says the United States has the highest maternal mortality rate among developed countries. He says there’s a greater group of mothers who die within a year of giving birth for reasons related to overdoses and opioids.

“Having access to health insurance for that group of people for a year past giving birth is going to open up a lot of opportunities for people to maintain access to care,” he says.

Swerlick says the two initiatives–the Medicaid expansion and the expansion for pregnant women–compliment each other, but should not be substituted for one another.

“It’s important to know that those women after a year, a substantial number of them are going to fall off the cliff and…not have coverage and that’s where Medicaid expansion would come in,” she says.

Swerlick says there’s an effort to get the Medicaid expansion in front of Florida voters in the form of a constitutional amendment.

“Medicaid expansion remains pretty popular among voters,” she says. “So the ballot measures that have been put before voters have passed.”