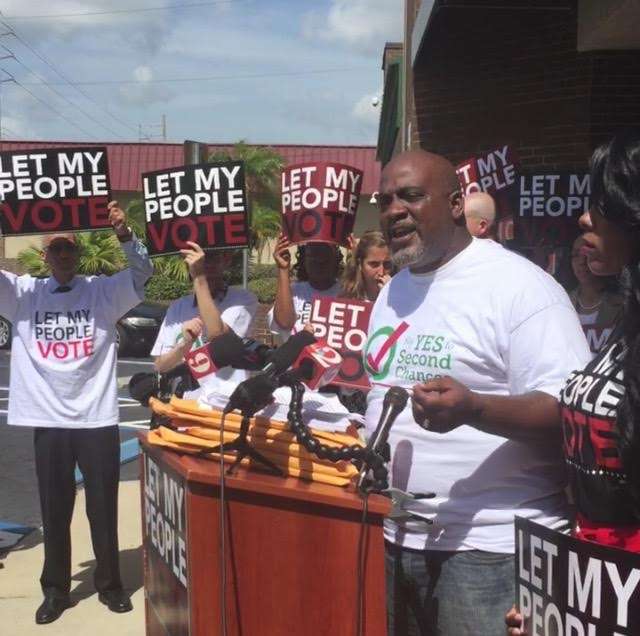 A statewide coalition of pastors, attorneys, and former felons says in this key election year Florida Governor Rick Scott and other state lawmakers need to put 1.5 million former felons back on the voter rolls. Members of the Florida Rights Restoration Coalition dropped off a petitions with 7,000 signatures to the Orange County elections office Monday, the last day for Floridians to register for the August 30th primary.

Desmond Meade, head of the coalition, stood outside the office surrounded by people carrying signs that read “Let My People Vote.” The ex-felon-turned-attorney cannot vote or take the state bar.

“The right of an American citizen to exercise arguably the most critical expression of citizenship should not be denied,” he said. “Nor should the decision of whether an American citizen regain the right to vote be left in the hands of a select few politicians—democrat or republican. It doesn’t matter.”

According to a report from advocacy group, The Sentencing Project, ten percent of Floridians cannot vote, the largest concentration of disenfranchised citizens in any other state. Florida is one of three remaining states where ex-felons must petition before a clemency board to vote in a process that could take years. Meade says Florida lags behind states like Texas and Mississippi.

“Even those who are still serving time in states such as Maine, Vermont and in the territory of Puerto Rico can register and vote,” said Meade. “It is time for Florida to abandon their Jim Crow policy and embrace democracy.”

The Florida Rights Restoration Coalition is 2,000 signatures shy of triggering a review of the current law by the state supreme court.

The court requires 68,314 signatures in order to consider the proposed amendment to appear on the ballot.

Meade expects for its proposal to get on the 2018 ballot.