Everything You Need To Know About The New Hampshire Primary 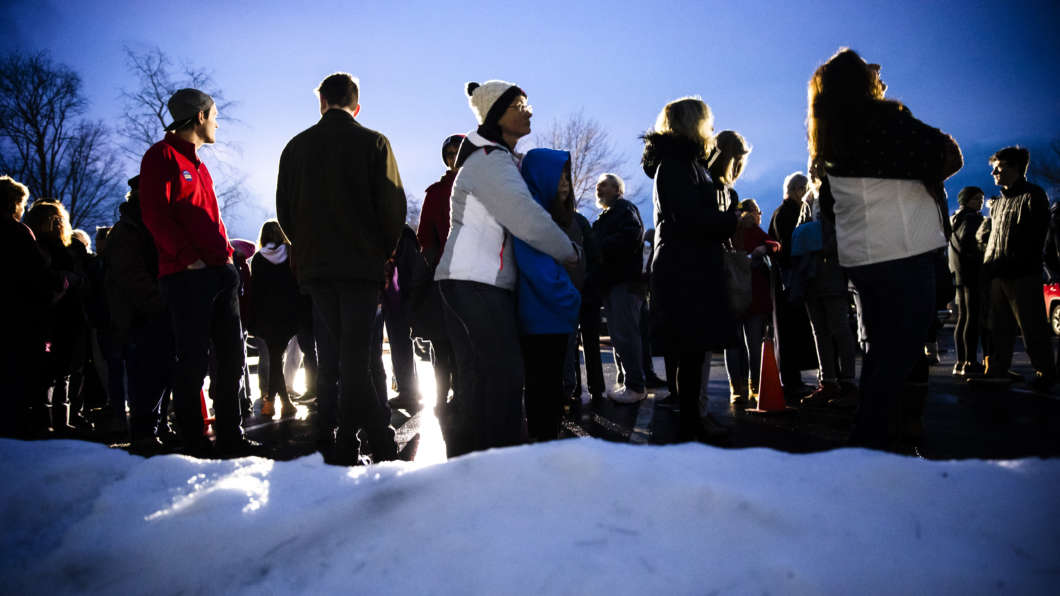 Democrats are going to try again.

After the Iowa results meltdown, New Hampshire takes center stage Tuesday night. This election is run by the secretary of state’s office and not the state party. It’s also a more-straightforward primary (with a couple kinks we explain below) rather than a complicated, math-heavy caucus.

There is lots at stake, as New Hampshire has served to reinforce or reset the Democratic primary race over the last five decades. As always, be ready for surprises, especially because through the years, a third to half of voters have made up their minds in the last week.

Here are some key questions, things to watch and the stakes for the candidates:

Is New Hampshire a swing state?

First, let’s set the table. Yes, in a general election, New Hampshire is very competitive. It went Democratic in the 2016 election, but it was the closest of all states (by raw vote) — just 2,700 votes separated Hillary Clinton and Donald Trump, and Trump’s team is closely watching and targeting it in 2020.

Why is New Hampshire first?

This question comes up repeatedly, because, like Iowa, New Hampshire is not a diverse state. It, too, is more than 90% white. In 2016, 93% of New Hampshire Democratic primary voters were white. It has been first for a very long time — 100 years this year actually.

Then, about 50 years ago, New Hampshire passed a law requiring it be first and gave sole power to the secretary of state to set the primary date. Bill Gardner is that secretary of state. He has been in the job about as long as the law has been on the books and has fought against efforts — Democratic and Republican — to move it.

When is the New Hampshire primary?

Polls open at 8 a.m. ET and close, in most places, at 7 p.m. ET. But there are 221 towns in New Hampshire, and they all set their own times. Some scarcely populated towns famously begin voting at midnight to gain attention.

When will we see results?

We will start seeing results after 7 p.m. ET for most places, but there will be no calls from the news networks or the Associated Press (which NPR relies on for calls) until at least 8 p.m. ET. At that point, expect the Republican primary (yes, there is one) to be called for President Trump.

When will we know who wins?

This is always tricky, because, um, Iowa. The state predicts we might know around 9:30 p.m. ET, but stay loose on that one. Check NPR’s New Hampshire liveblog throughout the day for updates live results. Also, since this is a delegate race, check out our new delegate tracker to see how many delegates are allocated to each candidate and where the race stands now.

Speaking of delegates, how many are at stake?

Twenty-four pledged delegates. There are nine more automatic delegates, which used to be superdelegates, but they matter less this year because they can’t vote on first ballot at the Democratic National Convention unless there’s an overwhelming majority for one candidate.

Sixteen of the delegates are allocated proportionally by congressional district. (There are two of them). Another eight are allocated by statewide vote (5 at large, 3 pledged leaders and elected officials. Those odd numbers will be important going forward in states to come because the overall winner essentially gets the extra delegate.)

That represents just 1% of the total number of delegates available; after New Hampshire just 2% of total delegates will be allocated (including Iowa). A candidate needs 1,991 delegates to win the nomination, so there’s a long way to go.

Are there thresholds for getting delegates like there were in Iowa?

Yes. Like Iowa, there’s a 15% to win any delegates. That’s true in every Democratic primary and caucus. The difference in New Hampshire is there is no resorting in a second round. You vote, it’s done. You get 15%, you get delegates. You don’t, well, you don’t.

How many people actually vote?

The record for turnout in the Democratic presidential primary in New Hampshire is about 288,000. That was set in 2008 in the race between Barack Obama and Clinton. The second-highest turnout was in 2016 between Clinton and Vermont Sen. Bernie Sanders about 251,000.

New Hampshire is known for high voter participation. In the 2016 general election, it was actually the second-highest turnout state behind Minnesota.

How does voting work?

It’s a primary, so voters head to the polls like they would in a general election. It’s “semi-open,” meaning independents can participate. About 40% of the state are independents, and given that there is no competitive GOP primary happening, one might expect to see a higher percentage of independents turn out on the Democratic side than in 2016.

Don’t confuse independents with moderates, though. Sanders, who won the 2016 primary by more than 20 points, won three-quarters of independents. He won a slightly lower percentage of self-described moderates, 59%.

Aside from independents, which other voters are important to watch?

The shape of the electorate is very important, and will get more important as the race winnows and support solidifies. The more liberal the electorate, the better it is for Sanders. And the Democratic electorate in New Hampshire has grown increasingly liberal.

In 2004, just 48% who turned out identified as liberal; in 2008, that jumped to 56%, as Obama turned out lots of young and new voters. But in 2016, more than two-thirds (68%) of the New Hampshire Democratic electorate was liberal. If that trend holds, that’s good for Sanders.

Young voters, under 30, made up about a fifth in 2016, and they broke overwhelmingly for Sanders. The percentage of young voters in 2016 (19%) was actually higher than in 2008 (18%) when Obama ran. Sanders needs that trend to continue, as he wins big margins with young voters.

The more white and and more people there are with college degrees voting, the better for former South Bend, Ind., Mayor Pete Buttigieg. He finished with the delegate lead over Sanders in Iowa, and he hopes to do well again in New Hampshire. With it being 93% white in 2016 and 60% with college degrees that lines up for Buttigieg.

Older voters were roughly a fifth. That number probably needs to be higher to help former Vice President Biden, who is declining in the state. And there’s no guarantee he even wins them now. He won the highest percentage of voters 65 and older in Iowa, but Minnesota Sen. Amy Klobuchar and Buttigieg won significant shares, too.

Who’s ahead in the polls?

There have been four different poll leaders in New Hampshire during this race. But Sanders is now the favorite. He leads by 7 points in an average of the polls over Buttigieg, who has surged since Iowa.

But this is New Hampshire, where things can change quickly and a third or more tend to say they made up their mind in the last week. Remember, Obama had an 8-point lead in the polls over Clinton in 2008 and lost the primary by less than 3 points, so be prepared for anything to happen.

What’s at stake for the candidates?

Everything. Here are some things in particular to look for:

Can Sanders expand his base? Sanders was promising high turnout in Iowa, but it didn’t happen. Turnout was more on pace with 2016 than 2008. That’s not exactly a groundswell of support and an overwhelming movement. But New Hampshire is take two for Sanders and the rest. Can they show they have fired up Democrats enough to take on Trump this year?

Sanders did well in urban areas and college towns. He needs to show he can reach beyond that. The Democratic Party doesn’t need help winning in those places. Still, a win would be a win, and Sanders would be in the pole position for the nomination if he does, especially considering that moderates and establishment Democrats don’t appear to be coalescing around anyone any time soon.

For Buttigieg, New Hampshire is nice, but…: Again, New Hampshire is a very white state, and Buttigieg has struggled in polling with voters of color. He needs to perform well in New Hampshire, but then the real test comes when the race moves to Nevada and South Carolina, two states with much more diverse electorates.

Who finishes third? This might be the biggest and most important question of the night. Biden is fading fast. He’s been hoping that South Carolina and his support with African American voters would be his firewall, but South Carolina is weeks away, and there may be evidence he’s already declining with African Americans. A Quinnipiac poll out Monday showed former New York Mayor Michael Bloomberg, who has now spent more than $350 million on ads, eating into Biden’s support with black voters. Can Biden really survive a fifth-place showing in New Hampshire?

Meanwhile, Massachusetts Sen. Elizabeth Warren, who finished third in Iowa, needs to be able show she can beat Sanders and Buttigieg, the two candidates most eating into her support. She polls second with progressives to Sanders and second with college-educated whites to Buttigieg. New Hampshire is an opportunity for her to show she’s right in the mix with them and deserves another shot when the electorate gets more diverse. But if she doesn’t perform well….?

How far can Klobuchar go? She’s seen a sharp spike since coming close to Biden in Iowa and after her strong debate performance in New Hampshire Friday. She’s actually now polling third, slightly ahead of Warren and Biden. If she were to take third, wow. Moderates not thrilled how Biden has held up and think Buttigieg is too young and inexperienced are looking around.

And Klobuchar has a good case to make. She’s 59, been a productive senator and won reelection by a lot in a Midwestern state Trump came close in. But is it too little, too late? She needs the donations to pour in if she’s going to have a shot, and that starts with a surprising finish in New Hampshire — ahead of some of the field’s heavyweights.

How long do lower-performing candidates continue on?

Wealthy venture capitalist Tom Steyer has the personal resources to go as long as he wants, but he’s seen little payoff in the results. He’s making a serious push in South Carolina, but no polling so far indicates he can win the state. That effort might wind up wounding Biden more than any other candidate, as he’s making inroads with black leaders and voters.

Andrew Yang has a deep well of support, but it’s not very wide. He wound up with fewer than 2,000 votes in Iowa out of 170,000. Yang is a serious person with a serious message, but if he finishes in single digits again in New Hampshire, he and his supporters have to ask themselves why he’s running — is it to make a point or is it to win? And if it’s to make a point, for how long and will his supporters wholeheartedly get behind whoever winds up becoming the Democratic nominee?