Everglades 101: Just How Does This Thing Work, Anyway? 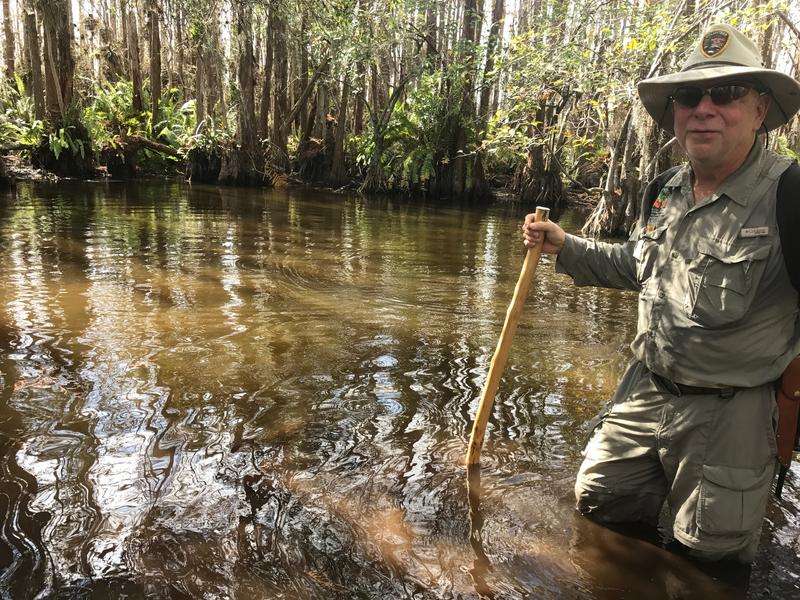 Wayne Rassner, board chair of the South Florida National Parks Trust, shows off an alligator hole in a cypress dome at the heart of Everglades National Park. Photo by Kate Stein, WLRN

If you scoop a glassful of water from the heart of the Everglades, that water is as pure and clear as the water that flows from your tap.

That’s because chances are good your tap water comes from the Everglades.

One in three Floridians — more than eight million of us — gets drinking water from the Biscayne Aquifer a few feet below the southeastern Everglades. The ecosystem acts as a natural filter, removing excess nutrients and keeping out seawater.

But the Everglades are under siege. Half of ‘the river of grass’ already has been lost; more is dying off. And as the aboveground ecosystem slips away, so does our underground fresh water. To understand why, you have to understand how the Everglades used to work. Call it ‘Everglades 101.’

Claiming The “Land By The Gallon”

Coconut Grove resident and POLITICO journalist Michael Grunwald wrote The Swamp: The Politics of Paradise. It’s a history of the Everglades and restoration efforts. And after years of research and reporting, Grunwald can summarize how the ecosystem used to work in just three sentences:

“The Everglades used to flow from north to south in this big broad sheet of water. It was very shallow and very clean. And it kept the land wet all year long.”

North-to-south water flow and sawgrass marshes earned the Everglades the nickname “the river of grass.” But the Everglades are much wider and slower-moving than a true river. The greater Everglades ecosystem includes all of south and southwest Florida, extending east and west to both coasts. And a drop of water in the headwaters near Orlando may take a year to get to the ecosystem’s southern edge: Florida Bay, off the state’s tip.

“There was always water, but never too much,” Grunwald says. That all changed when settlers lured by the promise of bountiful land for agriculture started moving south. They arrived to find they’d purchased “land by the gallon” (as described by a dismayed Iowan whom Grunwald quoted in The Swamp).

The Everglades’ rich soil was covered by water several feet deep. Grunwald says it took time, but the new Floridians adapted, building canals, dikes and channels to manage the water for agriculture and development.

“We squirted the water this way and that way so we could live without having water dumped on us in the rainy season, and we’d still have some water to drink in the dry season.

“But we messed it all up for the Everglades and it turns out we kind of messed it up for us, too.”

The Color Of Catastrophe

The summer of 2016 vividly illustrated just how much our draining, channeling and containing has disrupted the natural order of the Everglades. The color of that illustration? Blue-green.

Blue-green algae blooms — thick as guacamole and smelling of sewage — erupted on the Treasure and Gulf coasts. They nauseated residents, choked coastal fishing businesses and kept tourists off the beaches during the normally lucrative July 4th weekend.

Florida Senate President Joe Negron, a Stuart resident, saw the profound economic impact on his community firsthand. That’s why he’s proposed a plan to address a main cause of the blooms: water releases from Lake Okeechobee.

The water in Lake Okeechobee has unnaturally high amounts of phosphorus. It got into the lake as fertilizer from fields and manure from farms.

When Lake Okeechobee gets too high for the aging Herbert Hoover Dike at its southern rim, extra water is sent east and west. That water mixes with bacteria from old septic systems and more fertilizer, from lawns. All that makes algae blooms grow — really fast.

Negron’s proposal is to speed up planning and construction of a reservoir south of Lake Okeechobee. Because if you can send the water south, then it doesn’t have to go east and west.

“This affects our entire state,” Negron says. “When there’s a front-page article on the national section of The New York Times showing our community floating in green algae, people don’t say, ‘Oh, I shouldn’t go to the general area between Vero Beach and West Palm Beach. They go, ‘Oh, I didn’t know they were polluting their water in Florida.’ “That’s going to have an effect.”

The Dike And The Die-Off

Julie Hill-Gabriel is a deputy director for Audubon Florida. She agrees with Negron that the excess water from Lake Okeechobee should be sent south. Which seems a little odd. Why would an environmentalist want contaminated water flowing into the Everglades?

The answer lies in the dehydrated sawgrass and seagrass of the southern Everglades. And it gets at the problem underlying nearly all of the Everglades’ struggles: changes to water flow.

Back before settlers decided to have farms around Lake Okeechobee, fresh water spilled gently over the lake’s southern rim. It nourished South Florida’s sawgrass, then seeped into Florida Bay, giving life to seagrass and the fish, manatees and crocodiles that lived in brackish coastal marshes.

But then the Herbert Hoover Dike was built along Lake Okeechobee’s south edge.

The goal was to protect farming communities south of the lake. Massive hurricanes in the 1920s sent water roaring over fields, destroying crops and drowning thousands of people. The dike stopped those surges, but also stopped water from following its natural path south. Instead, an incredibly complex system of pumps, levees and canals transports lake water into the southern Everglades.

“Our problem is not having too much water,” says Hill-Gabriel. “The problem is finding ways to put it in the right place at the right time.”

Right now, too little fresh water is flowing south to Florida Bay. That’s causing areas of the sawgrass glades to dry up. And it’s killing off the bay’s seagrass, threatening the habitats of animals like manatees and crocodiles — and the local tourism and fishing industries.

Hill-Gabriel supports Negron’s reservoir plan because it would move more fresh water south, instead of discharging it east and west. And in addition to rehydrating the southern Everglades, south-flowing water would be cleaned in manmade treatment areas and natural sawgrass marshes.

With the east-west discharges, “we’re wasting billions of gallons of water in two funnels,” Hill-Gabriel says.

The Threat To Our Water

Environmentalists studying the Everglades’ many problems might have hard time picking which one is most worrisome. Blue-green algae, floods, droughts, fires and invasive species all compete for attention and research. But for Wayne Rassner, a volunteer guide in Everglades National Park and the board chair for the South Florida National Parks Trust, the answer is clear.

Rassner is squelching through knee-deep muck towards an alligator hole in a dome of cypress trees. He guides these “swamp walks” to show off the Everglades’ natural beauty, and to explain some of the challenges the ecosystem faces. He admits he’s not a scientist, doesn’t toss around phrases like “adaptive management” or “microtopography.”

That’s why his message is easy to understand: A lack of fresh water in the Everglades is really bad news for the one in three of us who get drinking water from the aquifer underneath.

“The importance of keeping water above it is twofold,” Rassner says. Pausing to rest on his walking stick, he explains that the Everglades’ marshy soil cleans water as it seeps into the aquifer.

But what’s critical, Rassner continues, is that fresh water above ground “keeps pressure against the saltwater that’s trying to intrude. Once there’s saltwater intrusion into the aquifer, you’ve lost it.”

That’s it. If the Everglades gets too dry and seawater pushes its way into the Biscayne Aquifer, eight million of us will have to seek drinking water elsewhere.

Not every Floridian cares about alligators or cypress trees, coastal tourism or fishing. But most of us care about having fresh water. That’s one reason there’s a multi-decade, multibillion dollar plan in place to try to restore what’s being lost.