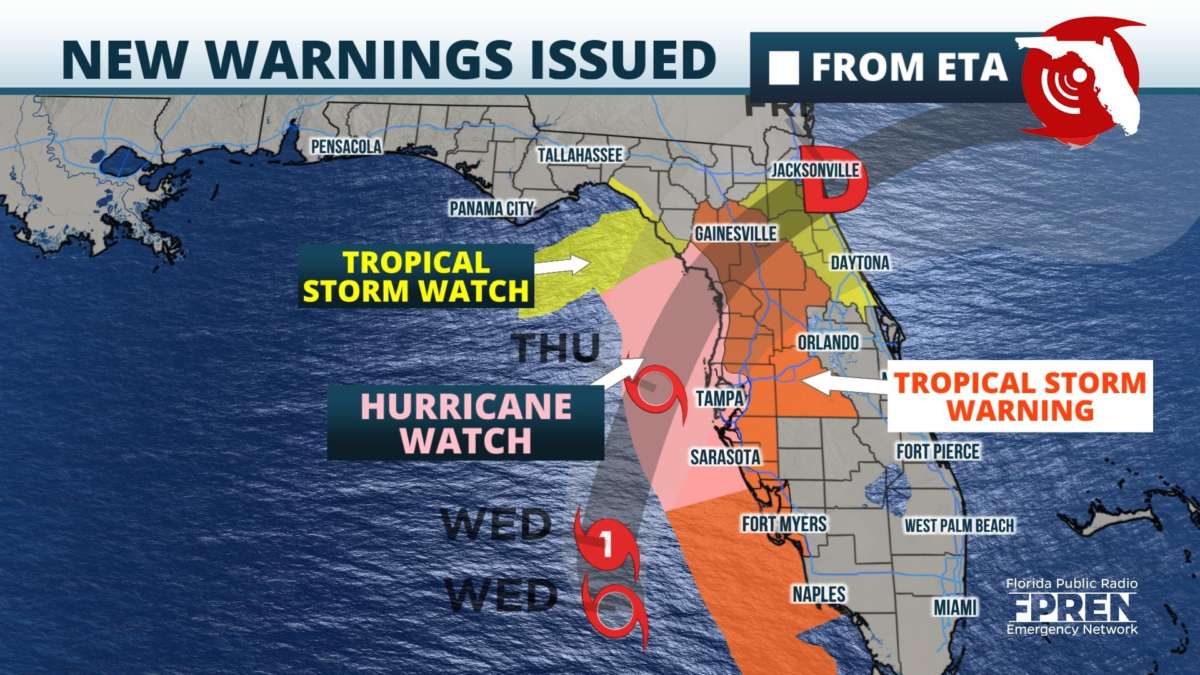 Update as of 1:00pm Wednesday:

Aircraft Reconnaissance indicates that Eta has weakened to a tropical storm with top sustained winds of 70 mph. It had briefly become a hurricane Wednesday morning. A Storm Surge Warning is in effect from Suwannee River to Bonita Beach, including Tampa Bay and Charlotte Harbor. Peak surges of 2 to 5 feet above normally dry ground are forecast somewhere within the surge area, particularly within a few hours of midnight near the time of high tide.

Update as of 8:30am Wednesday:

Hurricane Hunters have found that Eta strengthened to a hurricane again. It has maximum sustained winds of 75 mph and is moving north-northeast at 15 mph. It is located 170 miles south-southwest of Tampa. There are presently no changes to the tropical storm and hurricane watches and warnings, but that could change at 10am when the National Hurricane Center issues a new update.

Update as of 7:00am Wednesday:

A Hurricane Watch has been issued for Anna Maria Island north to Yankeetown, FL, including the Tampa/St. Pete metropolitan areas, for the possibility of hurricane conditions. Tropical Storm Watches have been extended from the Suwannee River north to the Aucilla River in the Big Bend of Florida. Tropical Storm Warnings continue from the Suwannee River to the Fort Myers area.

Heavy rain bands are already moving onshore in southwest Florida and are expected to move into the Tampa/St. Pete areas this morning. These rain bands should spread north to the Nature Coast this afternoon and into North-Central Florida (including Gainesville and Ocala) by early this evening. Tropical storm winds are likely to reach the west coast by early Wednesday afternoon, spreading inland to near Interstate 75 on Wednesday evening.

There is a small chance hurricane winds could be experienced along the coast and that’s the reason for the Hurricane Watch area. The most probable outcome is for tropical storm force winds within the warning area.

Rain bands are likely to continue on Thursday before diminishing Thursday night or Friday as the storm heads for the Atlantic coast.

Tropical Storm Eta’s next move is becoming a bit clearer, and the forecast track has again shifted. The shift is to the east this time, which puts more of Florida’s Gulf Coast at risk for impacts.

The Tropical Storm Watch issued Tuesday afternoon for the greater Tampa metro area and portions of the Nature Coast was upgraded to a Tropical Storm Warning just six hours later. It was also extended farther south to Bonita Beach and now includes Cape Coral, Fort Myers and Port Charlotte. A Tropical Storm Watch was issued along Florida’s Big Bend from north of the Suwannee River to the Aucilla River. A Storm Surge Watch was issued for coastal residents from the Steinhatchee River also to Bonita Beach, including Charlotte Harbor and Tampa Bay.

Tropical storm force winds of 40 to 60 mph are now likely in the warned area from Fort Myers to Tampa as early as Wednesday night, spreading north along the Nature Coast and portions of North-Central Florida during the day Thursday. Gusts nearing hurricane force are also possible in these areas along the coast, which will likely coincide with the stronger rain bands as they rotate inland.

The National Hurricane Center says a life-threatening storm surge of 2 to 4 feet is possible from the Nature Coast to just north of Naples, including Tampa Bay and Charlotte Harbor. Residents in these areas are encouraged to listen to local authorities for possible evacuation orders Wednesday. An inundation of 1 to 2 feet above dry ground is possible farther south from Bonita Beach to Florida Bay.

Forecasters at the National Hurricane Center said the most recent shift in the forecast guidance was a bit of a “surprise”, and likely a result of additional hurricane hunter data recently ingested into the models. Atmospheric conditions are still expected to be hostile to the storm as it moves north over the eastern Gulf of Mexico, and the official forecast continues to call for gradual weakening after Wednesday. However, the rate of weakening and speed of the storm are still very much in question due to large spreads in how the models handle several external factors that will likely play a role in Eta’s fate.

Regardless of how strong Tropical Storm Eta still is when it moves into the northeastern Gulf later this week, heavy rain, flash flooding and isolated tornadoes are possible in the same areas under the Tropical Storm Warning Thursday and Friday. A few outer rain bands not directly associated with Eta are likely to continue producing locally heavy rain occasionally in South and Central Florida as well through at least Wednesday. The National Weather Service continued Flood Watches into Wednesday evening for Southeast Florida because of the possibility of additional heavy rain on top of already saturated ground.

A high risk of rip currents will continue for several more days in Collier county on the west coast and along the Gold coast of Southeast Florida. High Surf Advisories were issued from the Treasure and Space Coasts northward to the First Coast, and rip currents are also anticipated in these areas through Thursday.

Eta is increasingly likely to encounter higher wind shear and dry air starting Thursday, which would cause the storm to weaken as it moves north toward Apalachee Bay. However, forecasters noted in their advisory late Tuesday evening that the center of Tropical Storm Eta might reform to the east of its current location. If it does, there remains the possibility that Eta would briefly regain hurricane strength and make landfall somewhere along the Nature Coast or just north of Tampa Bay.

Elsewhere in the Subtropical Storm Theta formed in the open waters of the central Atlantic Ocean Monday evening. It’s the season’s 29th named storm — a new all-time record for the number of named storms in the Atlantic Basin in one season. Theta is not forecast to affect land areas at this time. Yet another tropical wave in the central Caribbean has a high chance of becoming the season’s next tropical depression later this week or weekend when it reaches the western Caribbean. It is far too soon to say whether it will ever impact the U.S. coastline.