Eta Weakens, Some Rain Bands Linger in I-4 Corridor 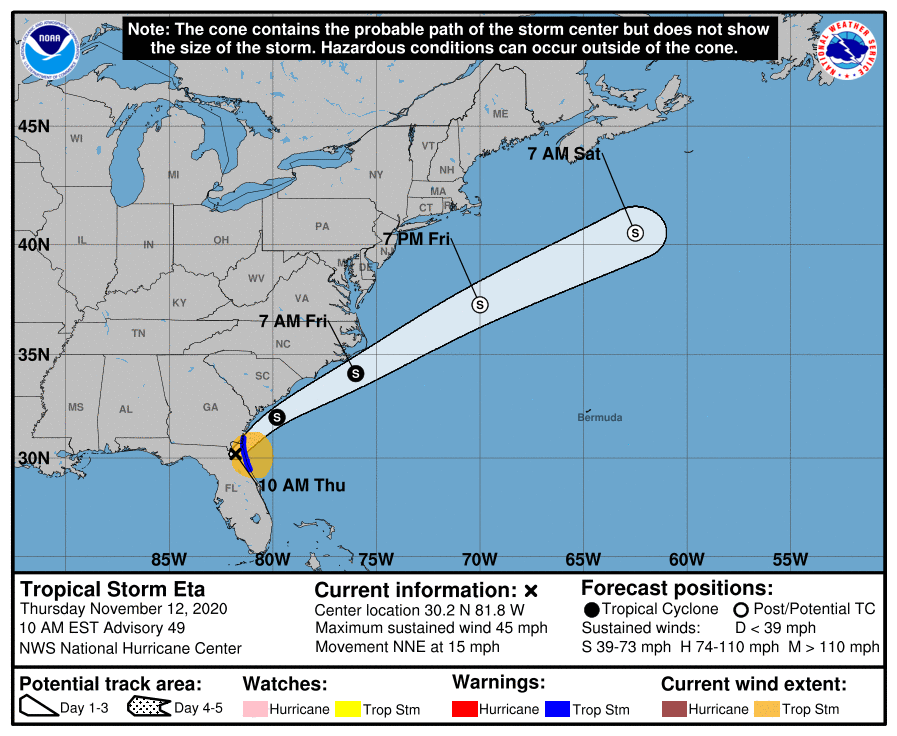 A few lingering rain bands from the storm are likely near the I-4 corridor and also along the Atlantic coast in Northeast Florida down to the Space Coast.

Tropical Storm Eta continues its march across North Florida. Its center is moving through Northeast Florida, near Jacksonville, and the heaviest rain and strongest wind gusts are along the immediate Atlantic coast. Meteorologist Ray Hawthorne says conditions will improve in many areas this afternoon…

A few lingering rain bands from the storm are likely near the I-4 corridor and also along the Atlantic coast in Northeast Florida down to the Space Coast. Overall, though, the storm continues to weaken and the center of Eta will move offshore late this afternoon with drier air following behind it on Friday.

Tropical Storm Warnings continue for the First Coast, where wind gusts to tropical storm force are occurring and are likely to continue early this afternoon. All Tropical Storm and Storm Surge Watches and Warnings along the west coast of Florida have been discontinued.

Tropical Storm Eta officially made landfall at 4 am Thursday morning near Cedar Key, Florida in Levy County. The center of Eta is forecast to move through North Florida Thursday with occasional wind gusts to tropical storm force wind generally along and north of Interstate 4 primarily Thursday morning.

Occasional downpours and wind gusts to around 40 mph are possible from I-4 north toward the Ocala, Gainesville, Jacksonville, and Daytona Beach areas Thursday morning. The center of the storm is expected to exit into the Atlantic near Jacksonville around mid-afternoon Thursday. Most of the rain and strong winds are ahead of the storm, so conditions are expected to improve from west to east Thursday afternoon over much of North and Central Florida.

Widespread wind gusts between 50 and 60 mph were observed from Sarasota and Manatee counties northward into the Tampa/St. Pete metropolitan areas Wednesday afternoon and evening. Wind gusts as high as 66 mph were reported near Beverly Hills in Citrus County from a private weather station. Gusts to near 50 mph were reported in Cedar Key and tropical storm force gusts in excess of 40 mph were recorded officially in Gainesville before sunrise Thursday. Tropical storm force gusts extended south into the Fort Myers area Wednesday afternoon when Eta was at its closest approach to Southwest Florida.

The National Weather Service passed along reports of storm surge flooding in Sarasota County near Longboat Key, which required the evacuation of some 50 to 100 people there. Additional surge flooding was reported between several inches deep and waist-deep in Pinellas, Hillsborough, and Pasco counties based on National Weather Service reports. Many of these reports occurred within a few hours of midnight, when high tide was expected along the West Coast.

Drier conditions are anticipated across most of the state on Friday, except for a few remaining downpours across parts of water-logged South Florida.