Eta Has Strengthened Into a Hurricane Again 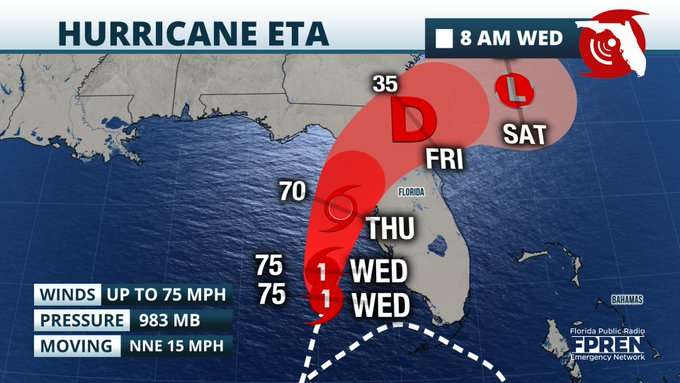 Eta has strengthened into a hurricane again.

Hurricane Watches have been issued from Anna Maria Island to Yankeetown, Florida and Tropical Storm Warnings are in effect from Bonita Beach to the Suwannee River thanks to a sharp eastward shift in Eta’s path.

Rain bands from the storm are already moving back onshore this morning and Meteorologist Ray Hawthorne says conditions are likely to deteriorate along the coast later today and tonight.

“The current forecast brings the storm inland midday Thursday as a tropical storm; however, there is a chance it comes in as a hurricane. I expect the worst of the conditions to be near the coast later this afternoon and tonight before conditions improve by Thursday evening as a much weaker storm moves into the Atlantic.”

Ray says rain and tropical storm force gusts are likely to spread across the Florida Peninsula mainly tonight and Thursday morning before moving offshore of the Atlantic coast by Thursday night.

He says 1 to 3 inches of rain may cause localized flooding as rain bands move through the peninsula.