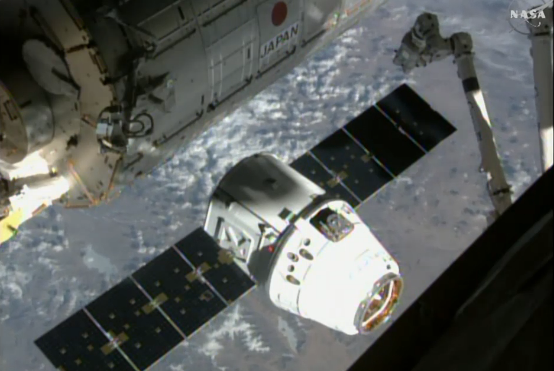 The SpaceX Dragon cargo capsule nears the International Space Station, as astronauts prepare to snag it with a robotic arm Friday.

The coffee on the International Space Station is about to get much better. The SpaceX Dragon cargo capsule linked up with the station today, bringing groceries, supplies — and a long-awaited espresso machine, called the ISSpresso.

In a rendezvous that was streamed live on the web, astronauts inside the ISS extended a robotic arm and captured the SpaceX Dragon Friday morning. NASA says the pair made contact 257 miles over the Pacific Ocean.

The robotic arm was operated by Italian astronaut Samantha Cristoforetti of the European Space Agency. It was her compatriot Luca Parmitano who said espresso was the only thing he really missed when he served aboard the space station.

“The ISSpresso is a box about the size of a microwave,” NPR’s Geoff Brumfiel reported this week for The Salt. “You put in a pouch of water, add a little capsule of espresso and press the button marked “brew.” The espresso comes out in a second pouch.”

Astronauts have been pining for a good strong coffee in orbit for years, but Italy’s space agency finally made it happen. The new machine is the result of collaborations between engineers from the country’s aerospace industry and the Lavazza coffee company.

A Lavazza vice president, Giuseppe Lavazza, promised that the ISSpresso machine would give the astronauts “a real coffee, that which one drinks in a café. Good, hot and steaming,” as Scott reported for The Two-Way last summer.

The Dragon craft will return to earth in five weeks, loaded with trash and cargo.