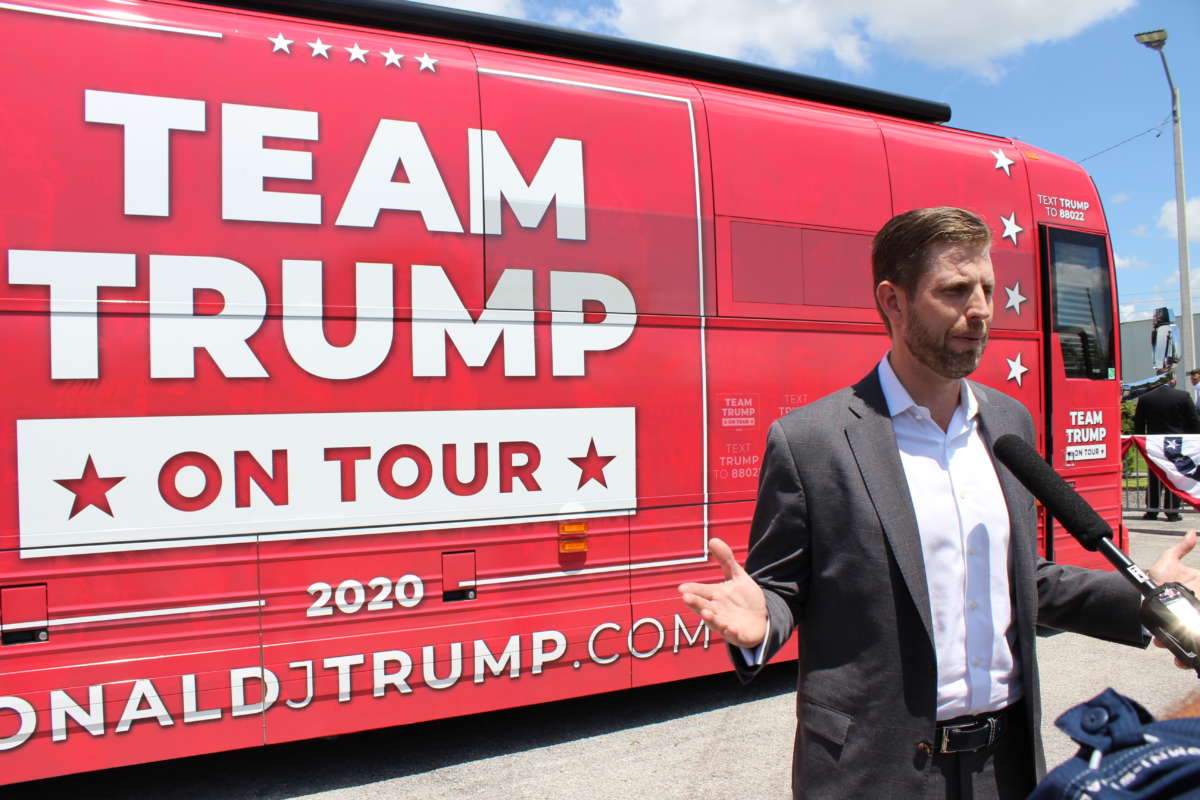 Donald Trump’s re-election campaign made a stop today in Kissimmee with the president’s son Eric Trump telling supporters to get out and vote. About 100 people braved the midday heat in the parking lot outside the Republican Party field office in Kissimmee to hear Eric Trump, along with campaign adviser Cory Lewandowski, Lt. Governor Jeanette Núñez and former Florida Attorney General Pam Bondi.

The president’s son took aim at familiar targets- including presumptive Democratic nominee Joe Biden- and he acknowledged the importance of the Sunshine State to the 2020 election, contrasting Florida with other states’ election systems, and urging supporters to vote by mail.

“In Florida you have an honest system. So vote absentee. Your vote will be counted, it is real,” said Trump.

But some supporters said they’d rather vote in person, like Ron Weedon, who drove from Melbourne with his son James to attend the rally.

Weedon said he plans to vote early, but he’s “dead against” voting by mail.

“You know what, we can stand in line to go grocery shopping and everything else. They can space everything- most of those aren’t spaced out anyway, six feet apart. So I’m dead against it.”

Ray Brooks, from Haines City, wore a face shield with an “I voted early” sticker on it.

“I don’t like the idea of voting by mail,” said Brooks.

I did vote early, but I went to the polls, there were like, two of us going through the polls in the time I was there. Voting early you can spread it out…but I do believe you should go to the polls and vote.”

“You get enough junk mail. Imagine if that junk mail were someone falsifying votes and sending it in. There are people that are perfectly capable of that.”

Brooks said the president has handled the pandemic well.

“I think we were hit by that virus which is a big set back. And I think he handled it better than anyone else would have, which does not mean we’re getting through it unscathed, it just means that it’s better than it would be if it had been someone else in there,” said Brooks.

Eve Wim, who voted for Trump in 2016, said she’s worried about coronavirus, but she’s confident that he can win again this year.

“I believe in him, and he’s going do it,” she said.”It’s just unfortunate the COVID-19 happened.”

That sentiment was echoed by Lausanne Walters.

“I think he’s going to get us back on track once they open the country back up,” said Walter.

Walter, who is from Bartow, came to the rally with two of her friends, including Jane Thomas from Lake Wales.

“I like that [Trump] is getting rid of regulations for the business people and for other people too. I like that he’s got a hold on the immigration mess,” said Thomas.

Before the rally, Osceola County Democrats held a press conference pushing back at Trump’s executive actions over the weekend to defer payroll taxes and extend unemployment benefits.

U.S. Rep Darren Soto called those executive actions unconstitutional, saying funds are allocated by congress and that the real solution is negotiating a bipartisan deal to help Floridians struggling during the pandemic.

He said the real problem is that there is no time table set out in the orders and that they rely on state instead of federal funding to help fill the gaps.

“Because our states don’t have that money, they’re hoping the federal government will step up so we can keep our firefighters, our cops, our nurses, and our teachers on the job,” said Soto.

“So all this does is cause confusion.”