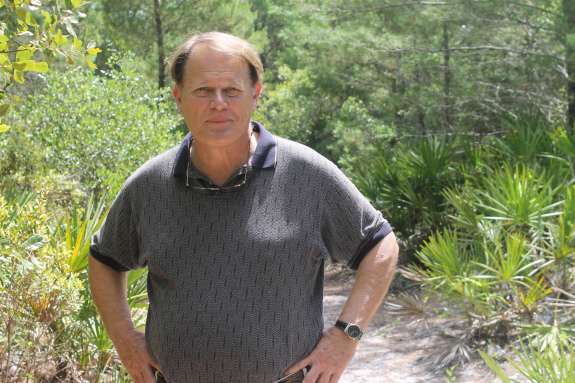 Scott Taylor saved this land from development by buying it himself. Photo by Amy Green

When the Florida Legislature reconvenes in two weeks in a special session centered on the state budget a large part of the debate will be about Amendment 1.

That’s the state constitutional amendment that mandates a 20-year, $22-billion conservation effort, the nation’s largest ever. Seventy-five percent of voters supported the amendment in November.

“I love the silence, the quiet and the fact that nobody made this but the good lord.”

Taylor is a retired businessman who cares deeply for Florida’s open spaces. Not only does he live on more than 400 acres.

“It’s a farm, and so we have, we raise horses, we have citrus and we have cattle.”

He’s an Audubon of Florida board member, and three years ago as this expanse in Lake County of wetlands and bear habitat faced a future of hundreds of homes Taylor and a partner bought the land themselves. Then they sold it to the state at a loss for conservation.

“The property is virtually untouched by man and represents a tremendous example of what properties we’re attempting to restore should look like and should be, with palmetto, scrub, pines, oak. All of these features are here.”

Taylor and other environmentalists envision the land as part of a massive wildlife corridor stretching from Ocala National Forest to Rock Springs Run State Reserve. The region is home to the state’s largest black bear population, but so far only a small part of the land is under state protection. It’s the kind of thing environmentalists hope Amendment 1 will fund.

But many lawmakers including Gov. Rick Scott say they would rather invest in existing state lands, not buy new.

“There’s clearly lands we need to buy, and we have money in the budget for that. But we’ve got to finish projects. When I ran in 2010 I heard time and time again that we were not finishing environmental projects.”

House Speaker Steve Crisafulli of Merritt Island says it’s irresponsible for the state to buy lands without any management plan. Sen. David Simmons of Altamonte Springs says lawmakers ought to focus instead on the state’s most pressing environmental concern: water.

“Buying land just for the purpose of buying land is not the solution. It’s buying land that is essential to the preservation of our resources.”

In fast-growing Florida where one study suggests the booming population will consume 7 million pristine acres in the next 50 years, few grassroots-led constitutional amendments have attracted more voter support than Amendment 1.

The amendment primarily is designed to restore Florida Forever. The state’s land-buying program was the nation’s largest and considered a model, but funding dwindled during the recession. Amendment 1 dedicates existing tax revenue toward conservation, an estimated $750 million this year alone. It directs the Legislature to allocate the money.

But Aliki Moncrief says environmentalists wanted to do more than shore up Florida Forever. She’s executive director of Florida’s Water and Land Legacy, the sponsoring organization of Amendment 1.

At the forefront of the debate are the Everglades and 46,000 acres of U.S. Sugar land environmentalists want for restoration. A state option on the land expires in October. Environmentalists invested in a statewide media campaign.

And they got Jimmy Buffett to perform for their cause at a rally in Tallahassee. At another event detractors hired actors to pose as protesters in West Palm Beach. But current state budget proposals don’t include funding for the U.S. Sugar land, and it looks unlikely the state will buy it.

Moncrief says the budget proposals put too much money toward things like employee salaries and almost nothing toward Florida Forever.

“The thing that is most concerning to us is that in both the House and Senate proposals more than $230 million is actually being proposed to go to existing operations. So it’s not new land management or new restoration or new acquisition.”

Sen. Thad Altman of Cape Canaveral says Amendment 1 will be part of the special session. He supports more land acquisition.

“The people have spoken. I agree with the people, and our constitution, we do have a constitutional requirement as elected officials to follow and adhere to the constitution.”

Back among the palmettos he bought and sold to the state to ensure their preservation Scott Taylor is frustrated.

“Currently I’m completely baffled as to how it’s possible for our legislators to look at an amendment to our constitution and not understand what voters meant when 75 percent of them said, do this. I’m puzzled. I’m disappointed.”

He says if lawmakers fail to follow the will of voters environmentalists will continue their campaign, but they’ll face lawmakers who say Florida’s open spaces already are enough.