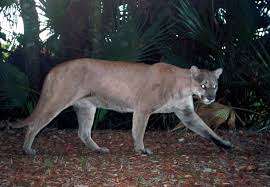 AVE MARIA, Fla. (AP) — An endangered Florida panther has been struck and killed by a vehicle.

It’s the eighth fatal collision this year, out of eight total panther deaths.

The Florida Fish and Wildlife Conservation Commission says that the remains of the 5-year-old female were collected Monday north of Ave Maria in Collier County.

Wildlife officials reported 42 panther deaths in 2016, including 34 fatal vehicle collisions in southwest Florida. That matched the 2015 record for panther deaths.

Florida panthers once roamed the entire Southeast, but now their habitat mostly is confined to a small region of Florida along the Gulf of Mexico. Up to 230 Florida panthers remain in the wild.