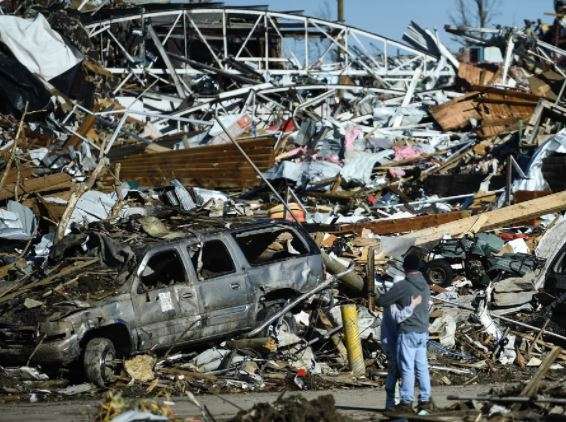 Two people share an embrace while surrounded by the damage left from a series of deadly tornadoes that swept through Kentucky and other states Friday night through Saturday morning. Mayfield, Ky., was left particularly devastated after a factory building collapsed with over 100 people inside. (Brendan Smialowski/AFP via Getty Images)

Search and rescue efforts remain in effect throughout western Kentucky after multiple tornadoes decimated parts of the state on Friday evening and Saturday morning, leaving many communities destroyed.

In that time frame, dozens of tornadoes moved across six states: Kentucky, Tennessee, Arkansas, Illinois, Missouri and Mississippi — including one massive storm that tore through more than 200 miles.

The vast majority of damage and fatalities have been recorded in Kentucky.

Dozens of people are feared to have been killed in the state alone, according to Gov. Andy Beshear. He offered varying estimates on Sunday, ranging from what he described as a “best-case scenario” of 50 deaths to more than 100.

At a Sunday evening news conference, Beshear said more than 1,000 homes were destroyed and that thousands of people have been left homeless.

“I don’t think we’ll have seen damage at this scale ever,” he said.

Beshear declared a state of emergency Saturday morning. Hours later, President Biden approved emergency federal assistance for the state. The president is expected to travel to Kentucky this week and meet with Beshear.

“I saw almost half the town wiped out. It is a special place. It’s about 3,700 people and the devastation is just indescribable,” he told NPR earlier on Sunday.

“A block from my grandparent’s house — everything is just gone, gone. I’d like to say we’re going door to door in places, but there are no doors. That community is going to lose a number of people,” he added.

About an hour southwest of Dawson Springs sits Mayfield, Ky., which also faced severe destruction. Viral aerial images depict widespread damage across the city and what’s left of a demolished candle factory that collapsed when it was hit by a tornado.

“I was there yesterday, and it’s even worse than the images,” Beshear told NPR, referring to the candle factory, “It’s 15 plus feet of steel, of cars that were in the parking lot that went through the roof of drums of corrosive chemicals.”

About 110 people were reportedly working night shifts at the factory when the tornado hit.

“We’ve gotten about 40 out alive and we haven’t had a live rescue since about 3:30 yesterday morning. It’d take a miracle at this point, but we’re praying for it,” Beshear said.

On Sunday, a spokesperson for the factory, Mayfield Consumer Products, told The Associated Press that there were eight confirmed deaths and eight still missing while more than 90 had been accounted for. However, Gov. Beshear said the state had not verified those numbers. Though if accurate, it “may be a better situation and the miracle we were hoping for.”

Michael Dossett, director of the Kentucky Division of Emergency Management, said Sunday evening that the process to set up long-term shelter for those displaced will start immediately.

Homeland Security Secretary Alejandro Mayorkas said that FEMA will be on the ground in the state “until recovery is complete.”

Mayfield and Dawson Springs both fall near a storm path that barreled through six states in addition to Kentucky, including Tennessee, Arkansas, Illinois, Mississippi and Missouri.

Reports of increased fatalities, injuries and loss of power have continued throughout the region as emergency efforts push on.

As of Sunday, six people have been reported dead in Edwardsville, Ill., after a tornado caused an Amazon warehouse to collapse. Authorities on the scene say they are continuing rescue efforts.

Two deaths have also been reported in northeast Arkansas, including one man living in a nursing home. Four people have died in northwest Tennessee, and two in Missouri, including one child.

As of Sunday, Kentucky is the only state that has been authorized by the White House to receive federal aid. Biden urged governors to request federal aid if needed.