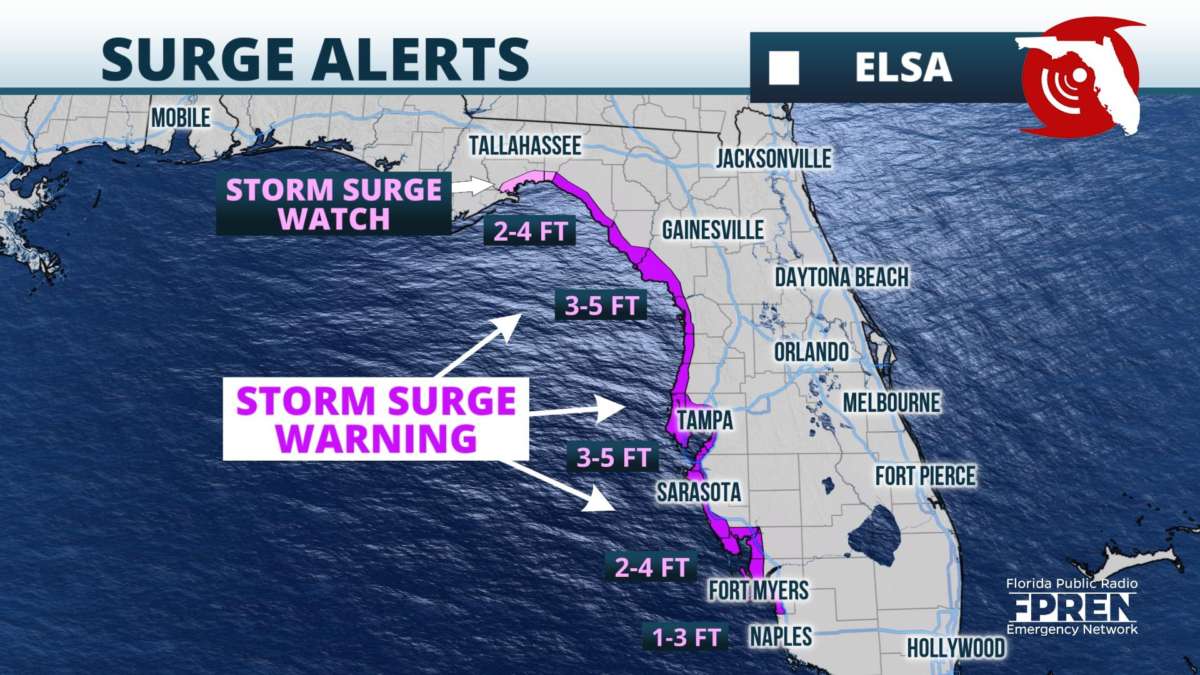 Tropical Storm Elsa moving across west Cuba, then to Florida

HAVANA (AP) — Tropical Storm Elsa is sweeping over western Cuba with strong rain and winds, and forecasters say it will move on to the Florida Keys on Tuesday and Florida’s central Gulf coast by Wednesday.

The storm is moving over mainly rural areas to the east of Havana on Monday after making landfall near Cienega de Zapata, a natural park with few inhabitants.

By late afternoon, Elsa’s maximum sustained winds had slowed to 50 mph (85 kph). Its core was about 45 miles (75 kilometers) southeast of Havana and moving to the northwest at 14 mph (22 kph).

Though the capital is expected to miss the brunt of the storm, many people in Havana were staying in place.

Tropical Storm Elsa is moving across the western part of Cuba and a bit weaker at this hour, now with winds of 60 mph and a forward motion to the northwest at 14 mph. The storm is forecast to move over the Florida Straits and into the southeastern Gulf of Mexico tonight, where Meteorologist Jeff Huffman says it could briefly re-strengthen.

“The will be a window of opportunity for the storm to intensify over the warm waters of the Gulf loop current, but this will be brief. Stronger winds aloft will likely shear the system starting Tuesday, limiting further organization before paralleling the west coast of Florida and coming ashore somewhere along the Nature Coast or Big Bend region early Wednesday morning.”

Jeff says while tropical storm conditions are less likely in our area, wind gusts up to 40 mph and an isolated tornado will be possible from the stronger rain bands that move through Tuesday afternoon and Tuesday night. Rainfall amounts of 2 to 4 inches should be expected, with locally higher amounts up to six inches possible.

The Tropical Storm Warning now covers the entire west coast of Florida, and extends northward to the Suwannee River, including Tampa Bay. The Tropical Storm Watch has been extended westward into the Florida Panhandle, to Indian Pass, and includes St. Marks and Apalachicola. The Storm Surge Watch has been extended westward, and now extends from Bonita Beach to the Ochlockonee River.

The 11 am advisory has top sustained winds of 65 mph as Elsa is about to make landfall along the coast of central Cuba.

Original Story from 8:30 am Monday

Tropical Storm Watches and Warnings and a Storm Surge Watch are posted a little more than a day prior to the arrival of Tropical Storm Elsa’s effects in Florida.

Elsa was just about to pass over central Cuba late Monday morning. Top sustained winds were near 65 mph as of the mid-morning advisory from the National Hurricane Center. It is still moving steadily toward the northwest at about 14 mph, but it is about half the speed it was moving Friday and Saturday morning.

A Tropical Storm Warning is in effect from Craig Key westward to the Dry Tortugas, including Key West. The warning extends northward along the west coast from Flamingo to Englewood, including the Naples and Fort Myers areas. Warnings are issued when tropical storm force winds are likely within 24 hours. In this case, the Keys are likely to see tropical storm conditions arrive late Monday afternoon and night before they reach Collier and Lee counties Monday morning.

Tropical Storm Watches are up from north of Englewood to the Aucilla River, including Sarasota, St. Petersburg, Tampa, and the Nature Coast. Tropical storm conditions are possible in these areas starting Tuesday afternoon from Sarasota and Manatee counties into the Tampa/St. Pete areas. These conditions are likely to spread toward the Nature Coast Tuesday night.

Tropical storm gusts could make it as far inland as The Villages, Ocala, and Gainesville late Tuesday night and make it to the Big Bend to Northeast Florida from Lake City to Jacksonville first thing on Wednesday.

Areas along the beachfront in the watch and warning areas are most likely to experience occasional gusts of 50 to 60 mph in the strongest rain bands. Farther inland, gusts between 35 and 45 mph are possible especially north of the Orlando metropolitan area toward The Villages, Ocala, Gainesville, Lake City, and much of Northeast Florida.

Rainfall amounts of 2 to 4 inches, with isolated amounts as high as 6 inches, are forecast over much of the Florida Peninsula. The highest totals are expected closer to the west coast, but a few places along the Atlantic coast could receive these amounts also. The heaviest bands are capable of flash flooding, urban flooding, and minor river flooding.

Storm Surge Watches were in place from Bonita Beach to the Suwannee River, including Tampa Bay. The watch means water level rises of 2 to 4 feet above normally dry ground are possible somewhere within the watch area. The surge is highly dependent on tidal cycles, can vary over short distances, and may not occur in all locations within the watch area. High tides are around midday Tuesday and during the wee hours of Wednesday morning, and may present the greatest potential for surge flooding along the coast.

Much of the Florida Peninsula will be to the east of the storm’s center. This places much of the state in a favorable position for isolated tornadoes. These brief tornadoes or waterspouts could occur over the Keys late Monday and spread over the rest of the state Tuesday through Wednesday morning.

Conditions are likely to improve statewide once Elsa moves northeastward into the Carolinas Wednesday afternoon or Wednesday night.