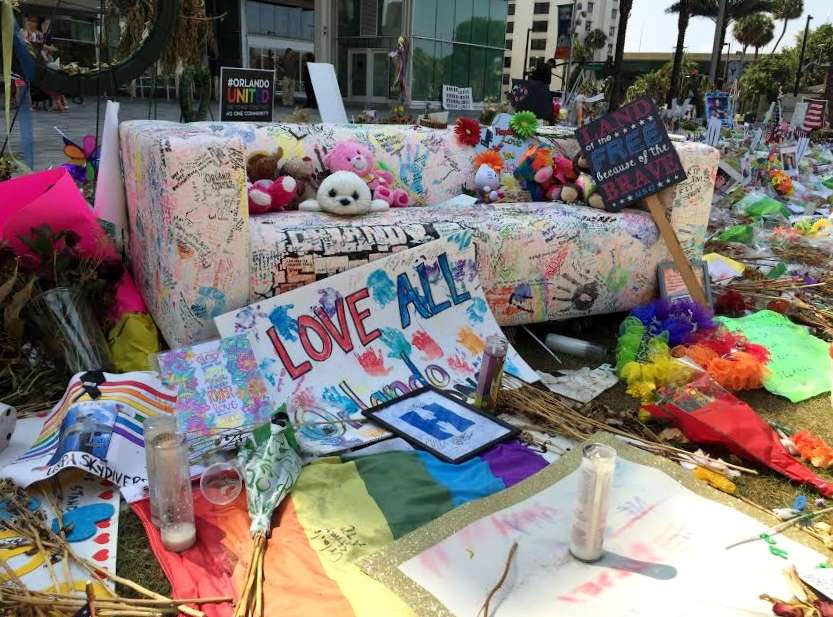 A trophy, Teddy bears, heart-shaped wreaths, and candles are just a few of the thousands of items mourners placed at a memorial in downtown Orlando in the weeks following the Pulse nightclub shooting. Photo: Renata Sago.

“The Second Amendment’s been around for over 200 years,” he told reporters at a ceremony in Orlando to honor volunteers who offered emergency services to victims and their families.

“The Second Amendment didn’t kill anybody,” Scott said. “Evil does.”

In the weeks after the shooting, several gun control proposals emerged. One idea, known as “No Fly No Buy,” drew bipartisan support from lawmakers and from Gov. Scott. Though the proposals varied in detail, they all recommended that the state make it illegal for individuals on the FBI’s terrorist watch lists to buy guns.

Patricia Brigham, first vice president of the Florida League of Women Voters, argues that proposal is insufficient. Brigham has spent the past three years battling what she calls “bad gun bills” in Florida’s legislature, as part of the League’s national agenda to bring stricter gun control to every state in the country. The group’s multi-year efforts led to the defeat of Florida’s campus carry and open carry laws, as well as the expansion of the state’s “Stand Your Ground” law.

Horrified by the type of weapon that was used at Pulse, Brigham helped form a coalition of almost a hundred gun safety, faith based, and health care groups with one mission: to reduce gun access.

“We were constantly sort of on the defensive. We thought, it’s time to go after some proactive, smart gun legislation,” she said.

“It’s a reflection of how many in our state want something done about it,” Brigham said.

Democratic state House candidate Beth Tuura is one of those people. When the openly gay political newcomer started her campaign, LGBT rights were at the center of her platform. She added gun control as a focus after the Pulse shooting.

“Pulse is two miles from my house,” she said. “Why did this happen? What can we do to prevent this from happening again?”

For Jon Gutmacher, gun control is not the answer. Over the past 35 years, he has been an NRA-certified firearms instructor, a prosecutor, a police legal advisor, and an unabashed gun advocate.

“Primary problem number one is mental health, which we are not addressing,” he said, “and the second problem are terrorists.”

Gutmacher has written a book on Florida gun law, which he says has grown from 120 pages to 350 in the past two decades. He believes people who do not own guns have no idea what the laws are.

“Anybody who owns a gun probably doesn’t have a very good idea of what the laws are either,” he said. “They’re too complicated and there are too many of them.”

Gutmacher likens the coming legislative fight for stricter gun control to one that took place at the federal level in 1994, when Congress passed a ban on assault weapons. That legislation sunsetted after ten years.

Gutmacher believes laws like that don’t address the underlying causes of gun violence.

She was at a vigil the night of the Pulse shooting. One of her friends who was in the club was still unaccounted for. But Doucette questioned whether stricter gun laws would have changed the outcome.

“Things like this, gun control wouldn’t prevent it. It’s the people. It’s just the people in general and the hate that they have in their hearts, because he could’ve went in there with several other weapons of choice – minus guns – and it could’ve been just as bad,” she said.

Her group is also trying to educate voters on the candidates’ positions on the issue because the legislature could debate gun control as early as next year.