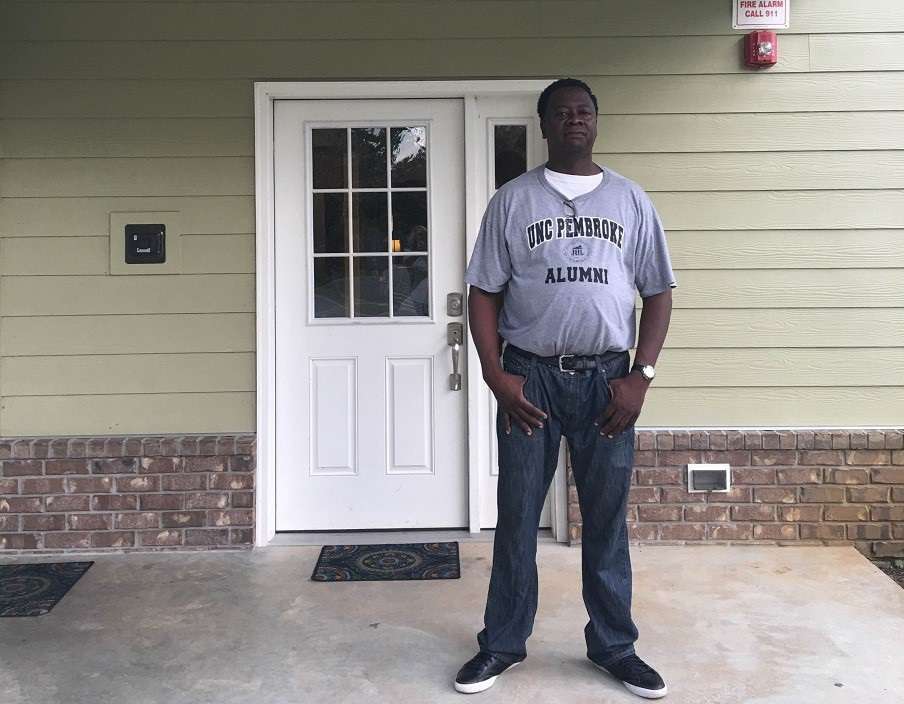 Housing is growing increasingly unaffordable for low income Floridians. There’s a tug of war over a state housing fund created nearly 25 years ago. Advocates say the program is one of the best of its kind in the country, and they want lawmakers to stop raiding it.

“Everything went well,” Jesse Scott said with relief, as he walked out of his interview at CareerSource Capital Region, an employment and training center in Tallahassee.

“There’s a lot of people that live on [the] edge. Many Floridians do base their livelihood on making a 40-hour work week each week,” Scott said. “If something interrupts that, you can fall between the cracks.”

That’s what happened to Scott after the North Carolina healthcare company he worked for closed down. He lost his job as a social services caseworker, then ran through his savings and unemployment benefits. He quickly found that part-time work wasn’t paying the bills.

It’s not where this single dad with a master’s degree expected to end up.

“It’s ironic how the tables have turned,” Scott said. “Having been on one side of the table, now I’m the recipient of a lot of services that I actually facilitated for others.”

For Scott and his 8-year-old daughter, those services include a temporary stay at the Bethany House. It’s a boarding style home with 11 private living spaces where families get help finding employment and stable housing. The average stay is about six months.

“You need to try to give people a push,” Scott said. “That’s all they need in some cases, just a temporary place so that they can regroup, come up with a strategy, and get back into independent living and get back into the workforce.”

A Dedicated Funding Source For Housing Needs
“Affordable” in housing terms typically means a household spends less than 30 percent of its income on rent or mortgage. More than 950,000 very low-income households in the state spend at least half of their wages on rent, according to the Florida Housing Coalition’s Home Matters report.

“They’re actually one missed paycheck away from homelessness – or one broken down car or medical bill,” said Jaimie Ross, president and CEO of the coalition.

The report found that five major metro areas in Florida were in the top 25 nationwide for annual rent increases in the third quarter of 2015.

State and local governments help fund safety net programs like the Bethany House with money from the Sadowski Housing Trust Funds. Florida lawmakers created the funds in 1992 to provide a dedicated revenue source for affordable housing. The revenue comes from a portion of a tax – known as a documentary stamp – that’s paid during real estate transfers.

Advocates say the Sadowski program is one of the best of its kind in the country, and the money was used entirely as it was intended up until 2002. Then, they say, lawmakers started raiding it.

“At that time, there was a philosophical opposition to trust funds in general,” Ross said. “The idea was, if we can get rid of the housing trust fund, we might be able to get rid of a whole lot of other trust funds.”

Ross also heads up the Sadowski Housing Coalition, which was instrumental in getting the Legislature to create a dedicated funding source for housing needs. The money is spent in a variety of ways, like helping a low-income family with a down payment on a home or a senior citizen with emergency home repairs.

Trust Fund Sweeps
The Florida Legislature can move money out of trust funds and into general revenue in order to cover shortfalls in the state budget. This happened when the state’s economy was in recession between 2008 and 2011.

So far, the thirty-plus members of the Sadowski Coalition have been unable to convince lawmakers to go back to using all the money for affordable housing.

Lawmakers can legally earmark trust fund money for other uses even when there’s no budget shortfall, like the current fiscal year.

“If it’s not in a constitutional provision, then it’s up for grabs each legislative session,” said Tallahassee Rep. Michelle Rehwinkel Vasilinda, a former Democrat now registered with no party affiliation.

In the 2016 legislative session, lawmakers used more than $100 million – about a third of the amount in the Sadowski funds this year – for other purposes. We contacted the offices of the Florida Senate president, House Speaker, and the Legislature’s appropriations chairs to ask about this. None responded with comments by our deadline.

Last spring, Florida lawmakers passed a bill to cut out some of the red tape that can get in the way of programs designed to tackle homelessness and other housing related problems.

But Rep. Rehwinkel Vasilinda hasn’t heard much talk among colleagues or political candidates about affordable housing needs. She says voters need to speak up if they’re concerned about the issue.

“They certainly should be telling the candidates and should be bringing this up at forums,” she said. “That’s super important.”