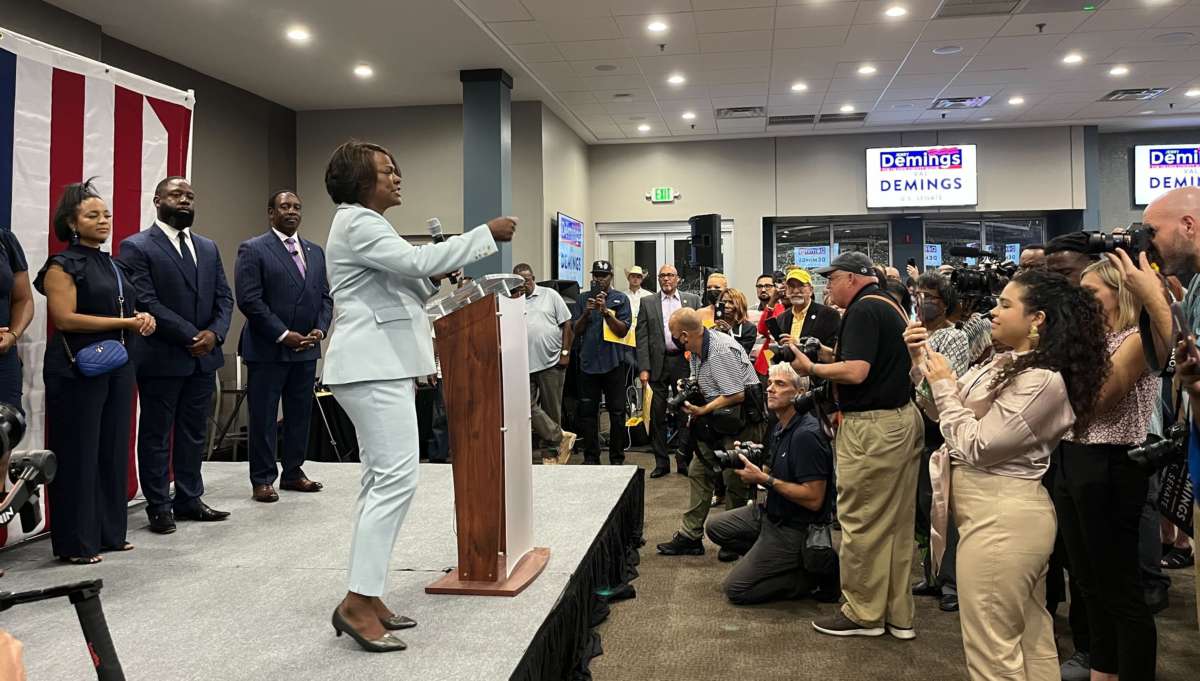 U.S. Rep. Charlie Crist has won the Democratic nomination for governor in Florida, putting him in position to challenge Gov. Ron DeSantis this fall.

In selecting Crist, Florida Democrats sided with a candidate backed by many in the party’s establishment who viewed him as the safest choice.

“We are going to make Ron DeSantis a one term governor and a zero term president of the United States,” she said. “This is a time for Democrats to come together.”

U.S. Rep. Val Demings of Orlando has won the Democratic nomination for U.S. Senate in Florida and will face GOP Senator Marco Rubio in November.

Republican U.S. Rep. Kat Cammock will face Democrat Danielle Hawk in the race for Congressional District 3, which stretches through 12 counties, including part of Marion County, in North Central Florida.

With most votes counted, Hawk defeated Tom Wells with 67.7% of the Democratic vote, and Cammock pulled in a whopping 85% of GOP voters, defeating Justin Waters.

U.S Rep. Michael Waltz has won the Republican nomination for U.S. House in Florida’s 6th Congressional District, which includes portions of Marion, Lake and Volusia counties along with Flagler, Putnam and part of St. Johns.

The Associated Press announced that he defeated challenger Charles Davis.

District 7: Mills and Green will face off

Cory Mills has won the Republican nomination and Karen Green the Democratic nomination for Congressional District 7.

With most votes counted, Mills had received 37.9% percent of the vote among eight candidates, according to early unofficial results. State Rep. Anthony Sabatini was second with 23.7%

Green had received 44.9% of Democratic votes among four candidates.

The district includes Seminole and part of Volusia County.

Joanne Terry won the Democratic primary in Congressional District 8 with 54.7% of the vote, beating Danelle Dodge.

In early unofficial results, Frost received 34.6% of the Democratic vote in a field of 10 candidates. They included State Sen. Randolph Bracy of Ocoee, who came in second with about 25%.

Frost’s win nearly secures his path to Congress since the Orlando-based seat is considered a solidly Democratic district. Frost will face off against Republican Calvin Wimbish in November.

“Today’s election is proof that Central Florida’s working families want representation that has the courage to ask for more,” Frost said in a statement. “I share this victory with the nurses, forklift drivers, teachers, caregivers, social workers, farmers, union organizers, cashiers, and other members of this vibrant community who supported this campaign.”

Webster won an unexpectedly tight race Tuesday against Laura Loomer, who has sought to align herself with former President Donald Trump.

Republican Gavriel Soriano also ran, receiving around 5% of the vote.

Webster will face Democrat Shante Munns in the General Election.

Thompson moves up to the Florida Senate

Geraldine Thompson has been elected to the Florida Senate to serve District 15, after a total of 10 years in the state House.

She ran against fellow Ocoee resident and Democratic State Rep. Kamia Brown. No Republicans entered the race, and they were the only two contenders for the seat after incumbent Randolph Bracy decided to run for  Congress. Bracy was unsuccessful.

Thompson received 53%of the vote to Brown’s 47.

“This is the seventh time I’ve been on the countywide ballot,” Jerry Demings said, “and I’m happy to say I’ve won all seven of them.”

Incumbent Christine Moore held onto her seat as Orange County commissioner for District 2 with nearly 58% of the vote.

Fellow incumbent Maribel Gomez Cordero, the District 4 commissioner, earned 47% of votes and will appear again on the November ballot against Mercedes Fonseca, who received nearly 27%.

The seven-candidate race for commission District 6 was close. Lawanna Gelzer received nearly 20% of the votes and Cynthia Harris 18%. The two will again face off in November.

Jacobs and Gallo win re-election to School Board

Teresa Jacobs easily retained her seat as chair of the Orange County School Board with 69% of the vote, beating out Demensio Barton, who had 16% and Carl Brewer with 15%. School board races are nonpartisan.

In District 1, Angie Gallo won re-election, too, with more than 62%.

In District 2, Maria Salamanca will face Heather Ashby in the General Election as neither candidate received more than 50% of the vote.

Alicia Farrant  garnered around 34% of the vote in District 3 and will face Michael Daniels, who earned around 27%.

Orange County voters have decided to continue a 1 mill property tax for education.

The tax is used for essential operating expenses, including pay for teachers and support staff, academic programs, arts, athletics, and student activities.