Election Officials Say Window To Mail Back Ballots May Be Closed, Suggest Other Paths 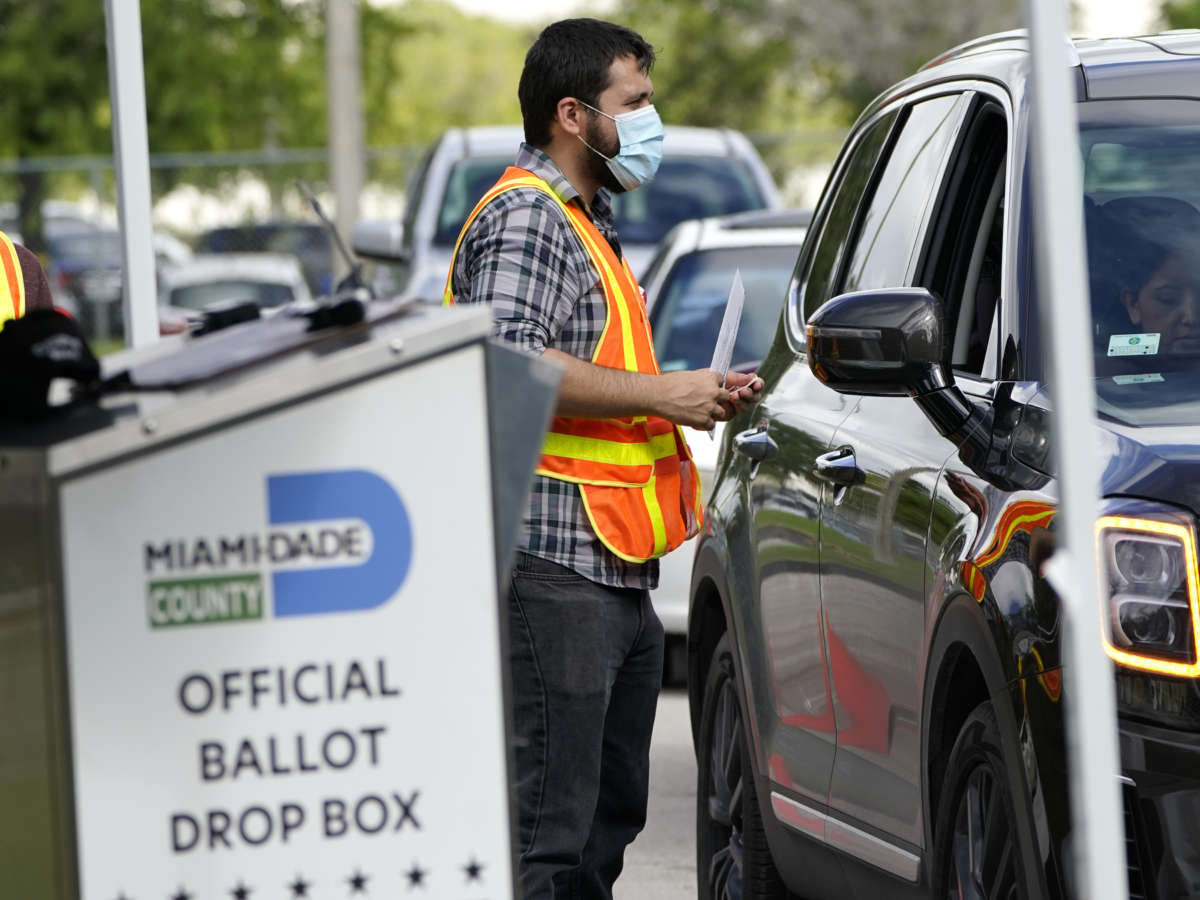 An election worker takes ballots from voters dropping them off at an official ballot drop box at the Miami-Dade County Board of Elections.
Image credit: Lynne Sladky

Election officials in many states say it is now too late for voters to return absentee ballots by mail and are encouraging them to instead deliver their ballots by hand or vote in person.

State rules differ about how late ballots can be received and still count. Absentee ballots must be received on Election Day in more than two dozen states, including a handful of key swing states like Arizona, Florida, Georgia, Michigan and Wisconsin.

In response to the coronavirus pandemic, some states approved new rules this year that would allow ballots postmarked by Election Day to be counted, so long as they are received within a specified time window after Nov. 3. Other states already had more generous deadlines on the books.

But with the end of voting now less than a week away, election experts and many state officials say there is no longer enough time to ensure ballots sent through the mail will be delivered in time, especially given service delays with the U.S. Postal Service.

“Voters who have not mailed the ballot as of this date should not mail their ballots and should find another means to vote,” says David Fineman, chair of the nonpartisan Fair Elections Center and a former chair of the USPS board of governors.

Action in the courts is also adding new urgency. The Supreme Court could take up challenges to deadline extensions in both Pennsylvania and North Carolina, states where ballots must be postmarked by Nov. 3 and arrive within three and nine days, respectively.

On Monday, the Supreme Court rejected Wisconsin’s plan to count mail ballots received six days after Election Day if the envelopes were postmarked by Nov. 3. The ballots must now be in the hands of election clerks by 8 p.m. on Nov. 3. or they will not count.

According to an NPR analysis this summer, thousands of ballots were rejected during the Wisconsin primary because they arrived too late. As of Tuesday, more than 300,000 absentee ballots in Wisconsin had not yet been returned. President Trump won Wisconsin in 2016 by fewer than 23,000 votes.

In states with stringent return deadlines, officials are encouraging voters to come up with alternative voting plans, such as submitting their ballots at official ballot drop boxes available in many states.

“We are too close to Election Day, and the right to vote is too important, to rely on the Postal Service to deliver absentee ballots on time,” Michigan Secretary of State Jocelyn Benson wrote in a statement on Tuesday. “Citizens who already have an absentee ballot should sign the back of the envelope and hand-deliver it to their city or township clerk’s office or ballot drop box as soon as possible.”

In Arizona, Secretary of State Katie Hobbs tweeted on Tuesday, “Today is the last recommended day to mail back your ballot. After today, return your ballot to any election drop box or voting location in your county.”

Other state election offices amplified similar messages on Tuesday, which they deemed the last day to mail a ballot with confidence it will arrive on time.

A surge in mail volume

The USPS recommends mailing ballots at least seven days before the state’s deadline. The agency has been plagued by service delays after Postmaster Louis DeJoy began implementing new cost-cutting measures. Though courts have ordered some of the changes reversed, postal customers have continued to experience slowdowns.

DeJoy has pledged to prioritize election mail and supply additional resources to process it, including expedited handling, extra deliveries and special pickups.

“With a record number of people across the country voting by mail, the U.S. Postal Service’s number one priority between now and the November election is the secure, timely delivery of the nation’s Election Mail,” USPS spokesperson Martha Johnson told NPR in a statement.

Total mail surpassed 3.1 billion pieces the week of Oct. 10, an increase of 23% compared to the average volume in September. USPS says 523 million pieces of election mail, including ballots and campaign literature, have been processed, an increase of 162% over the 2016 general election.

The week of Oct. 16, 96.7% of ballots were delivered on time, according to figures filed in federal court and obtained by The Washington Post.

But some worry that not all ballots get properly identified as election mail flagged for priority processing.

“It’s a number that seems OK, but it leaves out a lot,” says J. Remy Green, an attorney who is representing a group of voters in a lawsuit against the USPS.

The USPS defines on-time as delivery within one to three days. The on-time delivery rate for first-class mail generally remains below 90% nationally.

According to a report published by Sen. Gary Peters, D-Mich., the top Democrat on the Senate Committee on Homeland Security and Government Affairs, slowdowns persist in many postal districts. In Detroit, the on-time delivery rate for first-class mail was 71.6% the week of Oct. 10. In the Philadelphia metro area, it was 76.9%.

As part of a court order this week, the USPS has agreed to release daily performance data, though the postal service has cautioned about the accuracy of the daily figures. The data for Tuesday showed national on-time performance dropping below 70%.

For voters who have requested an absentee ballot, but haven’t returned it yet, experts say the best option is to deliver a completed absentee ballot to their local election clerk or an official drop box, if available.

In some states, voters who requested an absentee ballot, but now want to vote in person, will be required to cast a provisional ballot at their polling place. Those ballots will be counted once clerks can verify the voter did not also return their absentee ballot. In the past, there have been problems with precincts not having enough provisional ballots on hand.

If voters cannot cast their ballot by other means, attorney Green says sending a ballot in the mail at this point is still better than giving up on voting entirely.

“It is so profoundly better to take a chance that your vote is counted than not vote at all,” Green says.

According to the U.S. Elections Project, more than 70 million people have already voted in the 2020 election, including almost 50 million by mail.