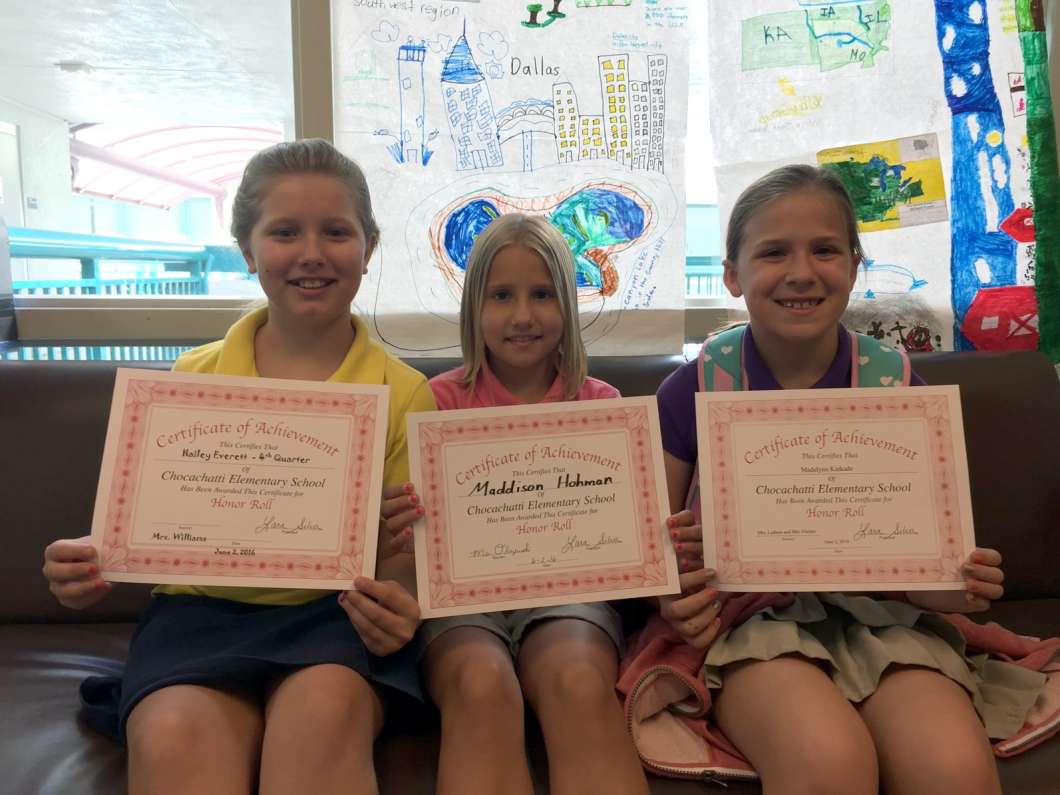 Third-graders Hailey Everett, Maddison Hohman, and Madelynn Kinkade were not promoted to fourth grade, despite receiving all A's and B's on their report cards at Chocachatti Elementary School in Brooksville/ Photo: Melinda Homan

The day before school let out in May, nine-year old Hailey Everett brought home a certificate for making the honor roll at Chocachatti Elementary School in Hernando County. The next day, her grandmother and guardian Pam Everett got a call from the school’s principal telling her Hailey would not be promoted to fourth grade.

My jaw hit the floor. I mean I couldn’t believe it,” she said. “Here’s this student that was two grades above her reading level, and then to tell me they’re going to retain because no score?”

Hailey had no score on the Florida Standards Assessment because her grandmother told her not to take the test. She broke the seal on the exam and signed her name to it, however, and Everett says that means her granddaughter participated in the test, as the state requires.

Opt-Out Protest Goes To Court
Each spring, third graders in the state’s public schools must take the Florida Standards Assessment, or FSA. Students who fail this standardized reading test can be held back.

Everett and thirteen other plaintiffs from seven counties have filed a lawsuit saying their kids were wrongly retained because they “opted out” of completing the test.

State law says schools may consider things besides the FSA, like teacher assessments and good report cards. But some districts interpret the law to mean no test score, no promotion.

In August, a Leon County Judge sided with the plaintiffs, but several school districts appealed, leaving opt-out students in limbo and angering parents like Brandy Paternoster in Weston. The Broward County parent testified in September before the district’s School Board.

County schools also dropped out of the case, so the number of school districts fighting the ruling is down to five.

Debate Over Opt-Out Becomes An Election Issue
Criticism over mandated testing has grown for years, but proponents say the assessments catch students who fall behind in time to help them.

“Students who are not reading proficiently in third grade are four times more likely not to graduate high school,” said Shan Goff, Florida Policy Director for the Foundation for Excellence in Education.

Last year, a dozen civil rights groups, including the NAACP and the Urban League issued a statement criticizing the opt-out movement. They argued testing identifies important inequalities in education for minority and low-income students and for children with disabilities.

But the anti-testing chorus is getting louder and opponents want to make sure lawmakers are listening. The Opt-Out Florida Network issued a voter guide detailing candidates’ positions on testing. The group is actively campaigning for politicians sympathetic to their cause.

What’s Next For Opt-Out Florida?
At a recent community event in Hernando County, opt-out grandparent Pam Everett gathered signatures on a petition to oust the county’s School Superintendent, whom she said was defying the court order.

On the morning after the judge ruled in Everett’s favor, her granddaughter Hailey got up early, excited to go back to school. When they got there, the principal told them Hailey would have to go back to third grade. She’s now being homeschooled, but Pam Everett says that’s not by choice.

“This is her school, this is where her friends at,” said Everett. “If I could get her back in, she would go.”

But Everett says she would continue to fight a system that opt-out families say has forced educators to teach to the test.

“Just because I got her spot back would not mean that I would go away,” Everett said. “The system still is broken. It needs to be fixed. This testing needs to go the wayside.”

Even if Hailey gets promoted, her grandmother says she will always opt-out of the FSA. As a fourth grader, however, the stakes wouldn’t be as high. Mandatory retention wouldn’t be an issue again until Hailey is in 10th grade.

As for the lawsuit, plaintiffs in Hernando, Orange, Osceola, Pasco and Seminole counties are awaiting a ruling on the appeal.