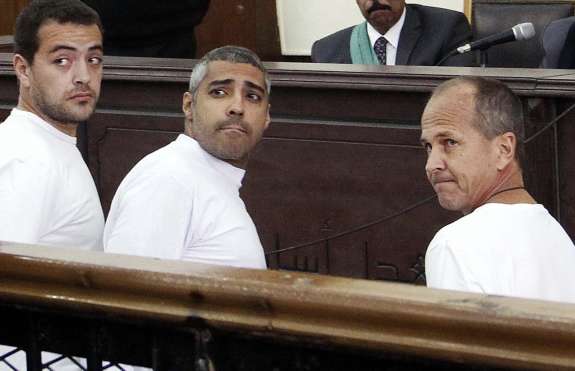 An Egyptian court has canceled the sentences and ordered a retrial of three Al-Jazeera journalists who have been in jail for more than a year.

NPR’s Leila Fadel, who was in the courtroom, tells Morning Edition that while this is good news for the men, their family members worry that another protracted legal proceeding could mean more time behind bars.

Peter Greste, Mohamed Fahmy and Baher Mohamed were convicted on terrorism charges. They insist they were only doing their jobs, and many news organizations, including NPR, have called for their release.

“After the conviction was overruled by the court of cassation today, an Al Jazeera spokesman said:

” ‘Baher, Peter and Mohammed have been unjustly in jail for over a year now. The Egyptian authorities have a simple choice — free these men quickly, or continue to string this out, all the while continuing this injustice and harming the image of their own country in the eyes of the world. They should choose the former.’ …

“Greste’s brothers Mike and Andrew said they were disappointed with the court’s decision.

” ‘We have learned in the past that this is not over until he is out, and it looks like we have a long road ahead of us.’ “

Leila says it’s not clear when a retrial would begin.