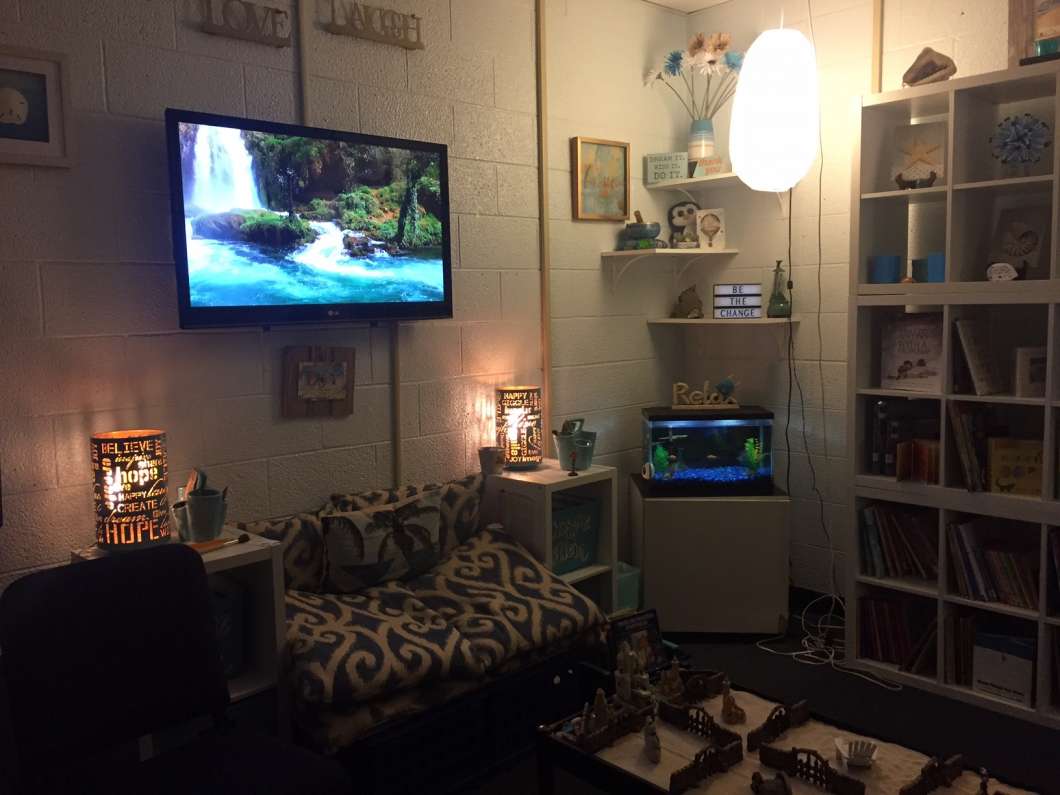 Saturn Elementary is a Title I school teaching low-income kids in West Cocoa. About two and a half years ago it created what’s called the “Zen Den.” A room with soft lights, wind chimes and soothing music, it’s a safe space for kids who act out in class. From our education desk, 90.7’s Catherine Welch visited the Zen Den and talked with school counselor Jackie Small and Principal Janice Rutherford.

Jackie Small:  As you walk into this room, I always tell them be careful of the energy that you bring into this room. You can almost feel it on your shoulders, you walk into calm. That’s what we wanted for them, so they can go into a space that made you feel like you weren’t even in the school.

Catherine Welch:  Can you measure the effect that the Zen Den is having on academic performance?

Janice Rutherford:  Yes I think we can measure not only the academic performance but also the behavioral. Data that suggests that the direct intervention with the social emotional learning is impacting our students not only with their academic achievement but also with their ability to function successfully in school, the decrease in our referrals, less out of school suspension for our students, which allows for increased instructional time.  They need to be here in order to be able to learn.

I would say absolutely. The success that we see overall as a school, with our performance in our school data, as far as academic achievement and also our behavioral data, suggests that the intervention that we’re providing on the social and emotional level is critical in order to have the overall student achievement

Catherine Welch: Jackie Small, is there a child that you remember who for them the Zen Den has really turned things around, and can you tell us a story about that child?

Jackie Small:  She was with her mom and she was removed from the home and now she is with a foster family in the area. However she talks a lot, and she has a lot to say. There is a lot on her heart. She will be leaving Saturn to move to another state with her dad at the end of the school year. We sit and we talk about things that are happening in her head. I know she misses her mother but she was going to have to transition from missing her mom into a new life. I’ve seen it turned her life around because she’s actually happy about the change that’s coming in her life, initially she was not. Now she’s looking forward to the future.

Catherine Welch: What is the biggest misconception about kids who act out in school?

Jackie Small: I’d say the biggest misconception is that they don’t care, they all come from bad homes, they’re all poor – they’re not all poor.  Some of them come from homes that they dress well. Sometimes it’s a lack of parenting, sometimes the parents aren’t there, sometimes they are being raised by grandparents.

You can’t always assume that, “oh well they don’t have any good support at home or they’re just bad for no reason.” Sometimes kids are hungry.  So once you get a chance to sit and talk with them in a room like this, I’ll come out of this and I’ll be able to tell the teacher, “let me tell you what’s really going on at home here so you’ll understand.” Then the teacher will say, “I had no idea.”

Catherine Welch: In what would you have to say to a school principal who maybe is considering something like the Zen Den?

Janice Rutherford: I would say that overall the positive impact that it will have on your school makes it worthwhile. That taking the time to address the social emotional needs of the students is critical to having success in other areas of academics. The students aren’t going to make progress until they know that you care. And so I think creating a space where not only the students feel safe, and feel that they have support, but also it lends itself to your whole school community.