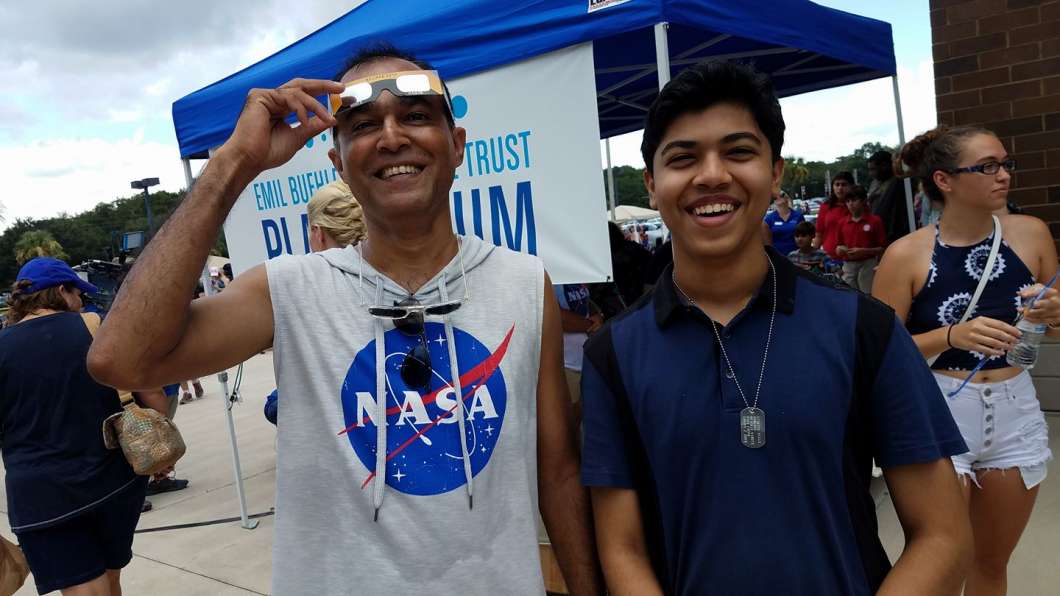 Thousands of spectators across central Florida looked at the sky Monday afternoon as the moon covered up the sun for a few minutes during a solar eclipse. Many places across the area hosted eclipse viewing parties that offered safe viewing opportunities.

Clouds got in the way for some residents, but that didn’t stop young onlookers at Seminole Sate College from asking big questions about the universe.

At Seminole State, the staff handed out more than 4,500 eclipse viewing glasses. In total, the college’s planetarium outreach distributed more than 8,000 pairs.

“The fact that we were able to touch so many people in the community and get so many people to participate is fantastic,” said planetary coordinator Michael McConville.

People lined up outside to take a peak at the sun through one of the planetarium’s telescopes, outfitted to safetly view the sun.  “I’ve never seen [an eclipse] before and it’s a really big deal, a once in a lifetime thing so I might as well see it why I’m alive,” said 18 year old McKenzie Brown. Her brother Chad, 11 years old, waited with the same enthusiasm, showing off his eclipse glasses.

Rafiqual Kahn brought his son Ishraq, 13 years old, to the event. Despite his young age, this wasn’t Ishraq’s first eclipse. The two lived in Bangladesh and were able to see one while Ishraq was around four years old. Still, Rafiqual was happy to see so many parents and kids enthusiastic about the eclipse. “Everyone is excited and everyone here will see one, and that is very good,” he said.

“I think it’s important, I wanted to bring all of them, I have five but I wasn’t able to bring everybody but I think it’s something they’re going to remember for ever. They can learn a lot. It’s great to see kids wanted to know about science and planets and how things work. I think it’s pretty amazing,” said Gomez.

Planetary coordinator Michael McConville said plenty of kids came up to him Monday to say they want to be astronauts, or astronomers or scientists now. The event inspired them.

“It’s a sign that what we’re doing, and what other organizations are doing around the area to get people involved in science and to get people to think about this,” said McConville. “That’s the greatest thing we can ask for is that people have that better understanding of where they are in the universe and how science works. They get to see an eclipse, too. That’s pretty awesome.”

He expects to see those same kids back at his planetarium, learning all about our solar system, very soon.