Eatonville Residents “Pull Up for George Floyd” by Registering to Vote, Sending Letters of Condolence 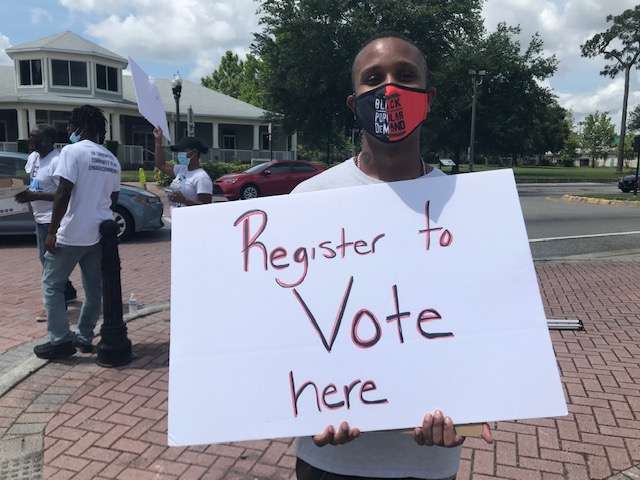 Eatonville residents participated in a “Pull up for George Floyd” event on Saturday where residents registered to vote from their car.

Floyd, who was African-American, died in police custody in Minnesota last week. Former police officer Derek Chauvin, who is white, has been charged with his murder.

Justin Jones wore a “Black by Popular Demand” face mask, and held a “Register to Vote” sign as he waved at honking cars in downtown Eatonville on Saturday.

Jones is a community organizer with Equal Ground a local nonprofit who registered people to vote in the November election from their cars. He said getting people involved in the political process is another form of protest against George Floyd’s death.

“And we have the ability to make a difference by getting out to vote and holding the people accountable who are doing our people injustice by getting them out of office.”

Jones said sheriffs, judges and state attorneys who lead the criminal justice system in America are all elected to those positions.

He said Equal Ground had also collected hundreds of letters of condolence for Floyd’s family as people pulled over and passed the cards out their windows.

“This would be our way of showing our support. And we feel like this would be a way that even though we’re not protesting, we are showing solidarity by practicing, by bringing the community together in solidarity by sending out these letters of support to the family.”

Protests that began on Friday continued over the weekend in the Windemere neighborhood where Chauvin has a town home.