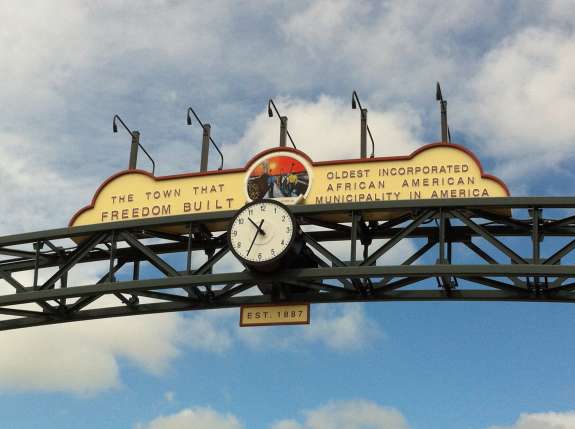 Both events come one day after the town’s police chief, Eugenio Bernal resigned and the Florida Department of Law Enforcement announced it is looking into complaints that Grant may have bribed residents for their votes.

90.7’s All Things Considered host Crystal Chavez talked with 90.7’s Renata Sago who has been following the story.

RENATA: Well, Eugenio Bernal was one of the town’s four appointed staff from past mayoral terms. The other appointed staff are the town clerk and finance and recreation directors. Grant asked them all to submit a voluntary resignation and then to prepare for a thirty day performance evaluation. Grant’s rationale was that an internal review would give him a chance to see if he and the staff could work together on his vision for the town.

But Bernal chose to leave the position before being subject to an evaluation.

CRYSTAL: Has the mayor found someone to replace Bernal?

RENATA: Yes, Eric McIntire. He’s a fifteen year veteran of the town’s department. I spoke with the mayor’s chief administrative officer, who says McIntire will take over the post immediately.

CRYSTAL: And for the other appointed staff, how did they react to being asked to submit voluntary resignation?

RENATA: I don’t know, but what I can say is that for now, it looks like they’ll be working through the internal review. After that review, Grant will decide whether he’ll replace those staff members or not.

CRYSTAL: Ok, but there are some allegations surrounding Grant’s involvement in last month’s election. What is the Florida Department of Law Enforcement looking into exactly?

RENATA: Well, the FDLE has received complaints that Grant was allegedly involved in fraud and bribery during last month’s election. Although the department hasn’t officially launched an investigation, it’s in the beginning phases of looking for irregularities in the voting results. The biggest irregularity seems to appear in the number of absentee ballots that Grant received. He received triple the number of absentee ballots the other four candidates got. But he came in second to the former incumbent Bruce Mount when it came to the number of people who went to the polls.

CRYSTAL: And Renata, that’s why the former mayor Bruce Mount is suing him?

RENATA: Exactly. Bruce Mount is suing Grant for election fraud. In fact, Grant was served the papers today. Mount’s lawsuit alleges that Grant bribed voters to get a higher number of absentee ballots. I spoke with Mount’s attorney, Jacob Stuart, who said several witnesses have agreed to testify that they were bribed or saw Grant tampering with absentee ballots.

This is what he had to say:

“We are confident at the time of the hearing we have witnesses that will come forward and say that they were offered money for their vote along with people being offered a reduction in their rent in lieu for their vote.”

RENATA: One of those witnesses includes a councilman who said he saw Grant going through people’s mailboxes looking for absentee ballots, then going into the person’s home and walking out with the ballot. For now, the attorney is looking at Grant’s expenditures to see any irregularities.

CRYSTAL: Renata, was does Eatonville’s mayor have to say about this?

RENATA: I’ve tried to reach him several times in the last two days and he could not be reached for comment.

CRYSTAL: How are residents responding to the story?

RENATA: I spoke with residents a couple of days before the election and it seemed as if the sort of internal divisions had been brewing for some time. A few residents mentioned political division stalling progress in the town.

Here’s a clip from Sonja James. She owns a hair salon in town. Her comment was made before the election, but has resonance still:

“I see Eatonville with so much more potential, but there’s so much bickering going on between the politicians here versus the true growth and development of the town.”

RENATA: Another resident, Charles McKinney, had something similar to say:

“For years, the town of Eatonville has had council members and mayors based on what I’ve seen since 1962, they can never come together, agree on anything. They seem to be personal about everything. They cannot get along.”

CRYSTAL: So what’s next in this lawsuit?

RENATA: Well, Grant was served papers today and he has ten days to file a petition to respond to the suit. A judge will schedule a hearing and decide based on evidence whether the town should have a re-election.

CRYSTAL: And how soon could that trial happen?

RENATA: Well, we could have a decision in a month or so.

CRYSTAL: 90.7’s Renata Sago, thanks for joining us.