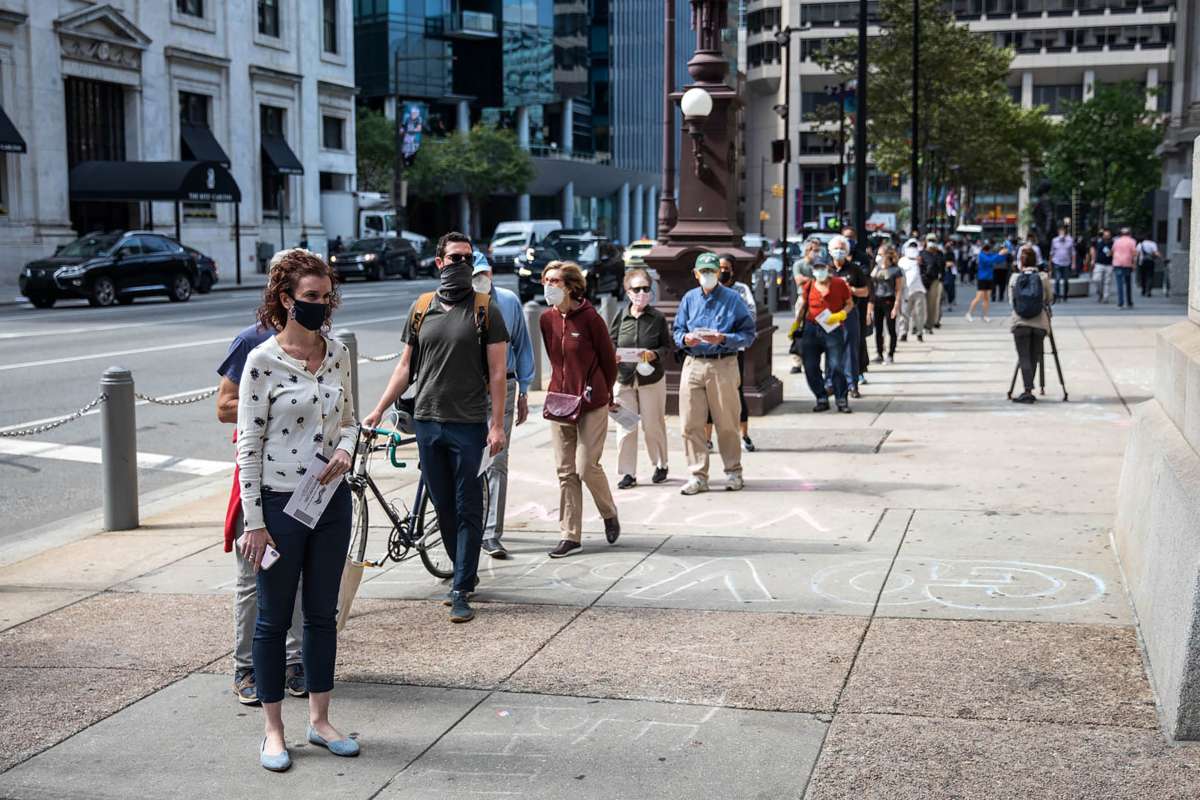 People wait in line to cast their vote during early voting at City Hall in Philadelphia on Oct. 7.
Image credit: Gabriella Audi

Early voting turnout continues to shatter records, as sky-high voter enthusiasm meets the realities of the United States’ creaky machinery of democracy amid a pandemic. That means long lines in some places, administrative errors with some mail ballots, but a system that is working overall, according to experts.

“Despite some of those concerns, things are going at this point reasonably well,” said former Deputy Postmaster General Ronald Stroman, speaking specifically about the expansion of voting by mail.

More than 26 million people have voted as of Saturday, according to the U.S. Elections Project, a turnout tracking database run by University of Florida political scientist Michael McDonald. That’s more than six times the number of votes cast by the same point in 2016.

While there are still more than two weeks to go before Election Day, here are some takeaways from the votes that have already been cast.

1. Democrats are coming in force

Polling data has indicated for months that Democrats intended vote earlier at much higher rates than Republicans, who were reacting to President Trump’s near-constant false claims that voting by mail would lead to widespread fraud.

Democrats have cast about 53% of the early votes, according to predictive analysis by the data firm TargetSmart, which uses voter data beyond party registration to project turnout trends. That’s compared to 36% by Republicans.

The early voters also tend to trend older. Voters 50 or older make up more than 70% of the votes cast, according to the TargetSmart analysis. Hundreds of thousands more young people have voted at this point in October, compared to the 2016 election, but they still make up a lower share of the overall total than they did then.

Overall, the share of registered voters who say elections in the U.S. will be administered well this year has dropped significantly over the past two years, from 81% in October 2018 to 62% this year, according to a new Pew Research poll.

That decline is driven by Trump supporters, half of whom now say they don’t think elections will be administered well. More than half also say they think absentee ballots won’t be counted correctly.

Those trends worry voting experts, who say confidence in the nuts and bolts of an election’s mechanics is key so that results are accepted as legitimate.

As early voting began in states like Georgia and Texas last week, long lines quickly formed at some polling places, with some voters waiting in line for many hours before casting a ballot.

Computer issues played a big role in those delays, according to officials.

In Georgia, Republican Secretary of State Brad Raffensperger said the registration database used to check people in for early voting was bogged down by the high amount of traffic.

“If you look at the amount of information that’s just flowing, it’s like everyone jumping on I-285 in the morning, and sometimes you have to stagger out the rush hour,” he said, according to Georgia Public Broadcasting’s Stephen Fowler. “Our vendors have been working on that along with our staff to make sure we’re looking at some other optimizations and we should have that probably done by the end of this week.”

In Fort Bend County, Texas, a check-in machine glitch shut down at least four precincts there.

“I, quite frankly, think it’s a form of voter suppression,” a voter named Renee told Houston Public Media’s Elizabeth Trovall, after waiting in line to vote for nearly four hours. “There’s no way there should be a glitch on the first day of early voting. No way … I’ve just never seen anything like this ever.”

Election officials and experts have warned all summer that some in-person voting locations would probably be plagued by longer lines this fall, as jurisdictions have had to consolidate polling places and recruit more poll workers.

But lines have been the exception across the country overall, not the rule. And there’s also optimism that precincts that have struggled with lines will start to see them ease as early voting continues.

Gwinnett County, Ga., for instance, was reporting lengthy waits earlier this week at a number of precincts, but by Friday afternoon, the county’s online wait tracker showed no wait longer than 90 minutes.

“Many people are passionate about participating in this election,” said Perez. “And so it’s appropriate that there’s a lot of bottled up demand for people to get there right away and get their vote in. The volumes you’re seeing on the very first day of early voting will probably taper off some later in the period.”

States have rapidly scaled up their vote-by-mail efforts to serve the 40% of voters who now say they plan to vote that way.

But with an increase in usage also comes a corresponding increase in administrative errors. Reports are cropping up seemingly daily of another batch of ballots that went out to voters with some sort of mistake.

“With a little under three weeks to go, it’s imperative that we ensure that our elections system is one that voters can trust,” said Allegheny County elections manager Dave Voye on Wednesday, as WESA’s Lucy Perkins reported. “This was a failure on behalf of our contractor and impacts too many of our voters.”

The county added a search function on its website so voters can check whether they were one of those affected, and it will also send all the voters new ballots.

Stroman, the former deputy postmaster general who is now a senior fellow at the Democracy Fund, said it’s important to remember that in all these instances, officials caught their errors with enough time to fix them. Officials also have safeguards in place to make sure no one votes twice.

“I think to this point, what we’re seeing are pretty much the normal mistakes, exacerbated by a global pandemic,” Stroman said.

Trump has sought to use these sorts of problems as evidence that the entire system of voting by mail is flawed or fraudulent in some way.

But these sorts of issues happen every election, says Kathleen Hale, an election administration expert at Auburn University, and they aren’t the sign of anything nefarious or broken.

“A significant portion of the process is conducted by human beings,” Hale said. “And they’re not perfect.”