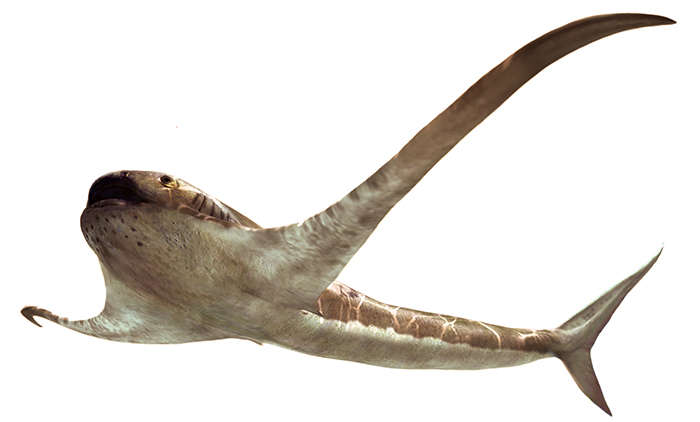 Researchers have identified a new species of shark with wings that roamed the Gulf of Mexico in the Cretaceous period.

The so-called “Eagle Shark” looks like a manta ray and shark chimera. Researchers made the discovery from a rare limestone fossil that showed soft tissue impressions in Mexico.

Oscar Sanisidro, a paleontologist at the University of Alcala in Madrid, Spain, is the illustrator who drew the new species: Aquilolamna milarcae.

Finding a fossil shark with remains of these soft tissues, not only the mandible but the rest of the body as in this case, is really, really rare,” Sanisidro said. “It’s super, super rare. And finding a shark as strange and weird in shape as this one is even more.”

He said going forward, paleontologists should be more careful to look for possible soft-tissue marks in fossil records.

“We as paleontologists we might have missed some of the traces of soft tissue in the rocks that from now on we should be more careful about.”

The shark’s large mouth and small teeth suggest it survived off plankton. Check here to read about the study, published in the journal Science. Romain Vullo, the study’s lead author, told Gizmodo that there was no question that it was a shark – but the evolutionary lineage past that is still unknown.