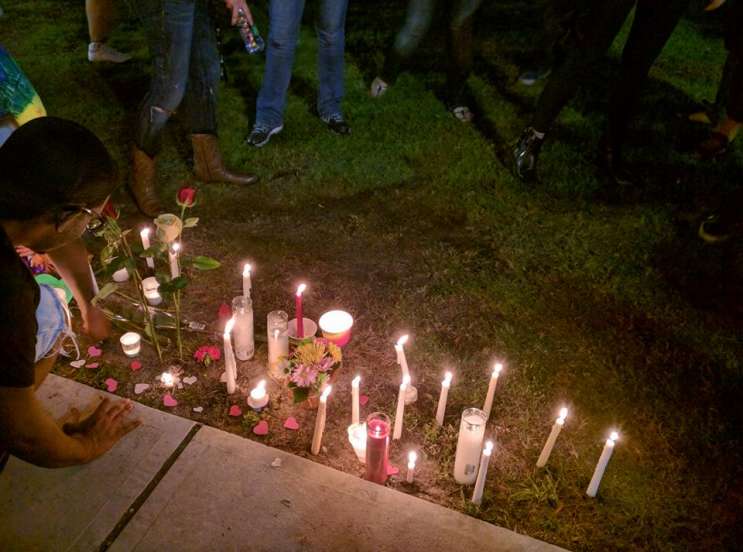 A vigil was held Monday, June 13, on the lawn in front of the Dr. Phillips Center for the Performing Arts.

Orlando Mayor Buddy Dyer says the shooter drove around Orlando Saturday night before opening fire on Pulse nightclub at around 2:00 am Sunday.

“What I know concretely is that he was driving around that evening and visited several locations. What I have seen on the news I can’t independently verify,” said Dyer.

When asked if other locations included theme parks, as reported in some media stories, Dyer said he thinks it’s been, quote “pretty accurately depicted on the news.”

Orlando’s cemetery is offering free plots to the victims of the Pulse nightclub shooting. Dyer said a new space has just opened and there’s enough space at Greenwood Cemetery if all of the victims want to be buried there.

“We’re leaving it to our sexton to deal with families, no pressure, we’re just making the plots available if they would like that, if it makes it easier for them,” said Dyer.

Dyer said Orlando will find a way to appropriately memorialize the 49 who died in the shooting.

Reports By Survivors From Inside Pulse
Survivor Patience Carter was inside a club bathroom with. She was huddling inside a handicap stall with others while the gunman talked to them from the other side of the stall.

“It sounded as if he was communicating with other people who were involved with it. He made the statement, ‘If the police come in they’re going to attack, but it’s OK. We got the snipers outside,’” Carter said.

“Whoever he spoke to, and you know some police officers, maybe he was just deranged. Maybe he was just talking to himself,” she said.
Carter was on vacation from Philadelphia and was at Pulse with two friends. She suffered gunshot wounds to her legs. One friend died.

Carter said the Pulse gunman divulged his motive to 911 dispatchers during the attack.

Angel Santiago suffered gunshot wounds to his knee and foot says he dragged himself to safety after authorities arrived at Pulse. When he finally saw an officer, he waved it with the light on so the officer would find him.

Santiago said he never saw shooter and never heard him speak, only gunfire.