Dozens of strangers were snowed in at a U.K. pub. Cue the Oasis singalongs 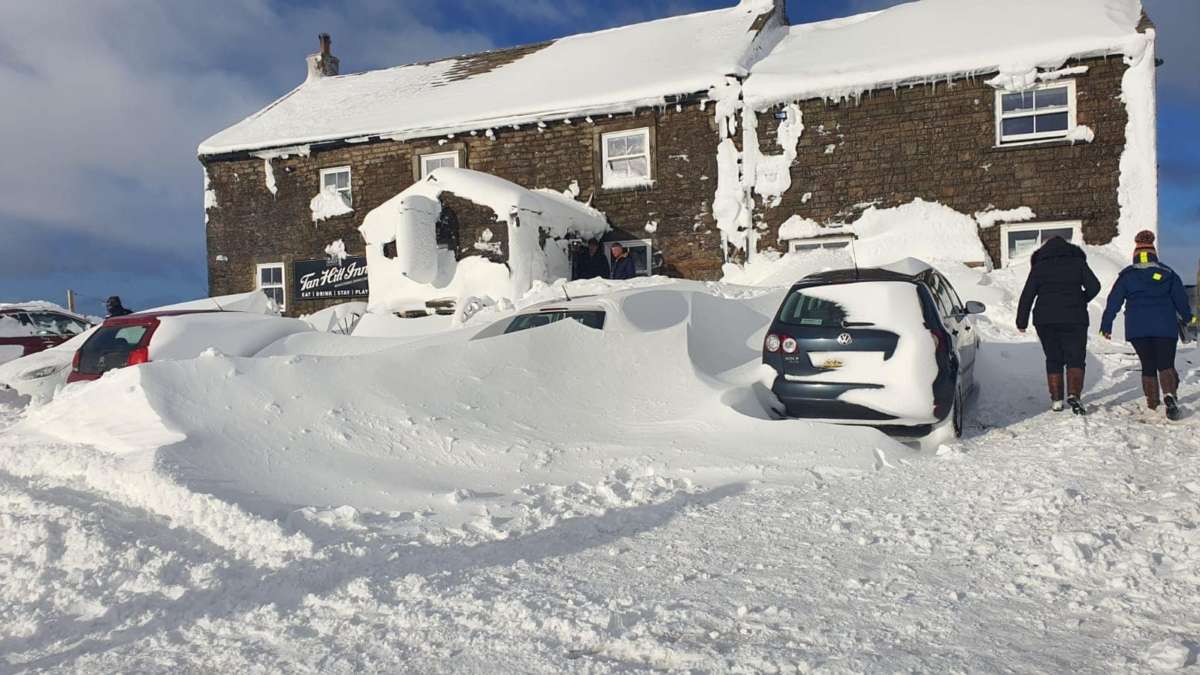 The Tan Hill Inn, in northern England, on Saturday. Dozens of people, mostly strangers, were stranded here for the weekend by snow and dangerous conditions.

They came for an Oasis tribute band and stayed for a massive snowstorm.

Dozens of people, mostly strangers, spent the weekend snowed in together at the remote pub after heavy snowfall blocked the exits.

The Tan Hill Inn, which calls itself the U.K.’s highest pub, was hosting the band Noasis when snowfall made leaving the area dangerous for staff, musicians and pub-goers.

Stranded residents slept on the floor and on mattresses provided by the pub, and passed the time by playing quiz games, watching movies and eating Yorkshire puddings.

Plus, they made use of their common interest by singing lots of Oasis karaoke.

Nicola Townsend, the inn’s general manager, reported to a television network that the group started with 61 people snowed in on Friday and had trickled down to about 50 by Monday.

A group of off-roaders helped the parents of young children get home, and a local mountain rescue group evacuated a man who needed medical treatment, according to the New York Times.

Once the snowfall stopped, residents couldn’t head home just yet, as downed power lines blocked the roads out.

The band was trapped at the pub as well, causing them to miss their next gig in Essex. “We’re very sorry to announce that we are stranded in Yorkshire, snowed in at the venue after last night’s gig at The Tan Hill Inn,” the band wrote on Facebook.

Storm Arwen over the weekend brought severe weather including heavy snowfall and dangerous–force winds to parts of Scotland and northern England. The storm has been attributed to three deaths, as well as transportation and power disruptions across the U.K.

All stranded pub-goers were able to leave Monday once the roads were declared safe by local authorities.

“We will ALWAYS remember this group of amazing people who came together, and hopefully, in challenging circumstances, enjoyed what we all think was a life-changing experience,” the pub wrote on Facebook.

This story originally appeared on the Morning Edition Live Blog.