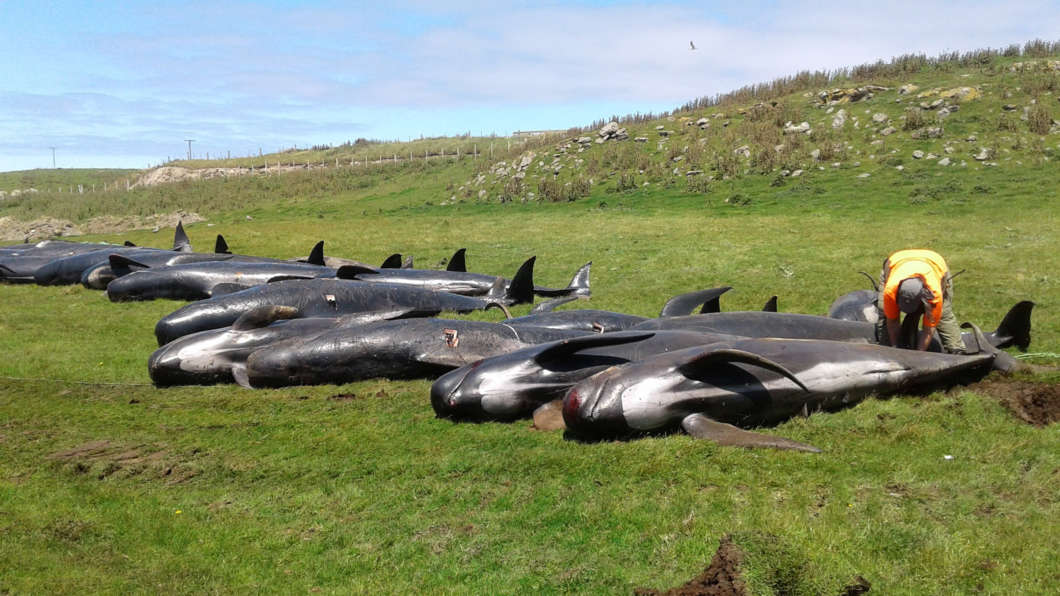 The beached pilot whales lie in clusters, dead on the shore of Hanson Bay in the Chatham Islands. Workers with New Zealand's Department of Conservation sought to prepare the 51 bodies for burial Friday.

Less than a week after a mass stranding left nearly 150 pilot whales dead on an island off New Zealand, the country finds itself coping with another unsettling spectacle of death. As many as 90 pilot whales were discovered beached Thursday night in the remote Chatham Islands, an archipelago hundreds of miles east of New Zealand.

“When staff arrived at the scene approximately 30 — 40 pilot whales had re-floated themselves and returned to sea, however 51 whales remained,” the country’s Department of Conservation explained Friday. “All were dead but one. A decision was made to euthanise this whale, due to its very poor condition.”

The news comes just days after a hiker on Stewart Island, far to New Zealand’s south, came upon two pods of the marine mammals strewn across the sand. In that incident, too, government officials made the “heart-breaking” decision to euthanize the survivors to end their suffering.

Later that same weekend, 10 pygmy killer whales washed ashore on the country’s North Island. Despite the efforts of more than 300 volunteers, who managed to send eight of the whales back to sea, most of them stranded again and died soon afterward.

“You’re talking about strandings across the entire breadth of New Zealand in a very short period of time, which naturally does cause everyone to reflect on whether those might have something to do with one another,” Dave Lundquist, a technical adviser on marine species, said in a video released by the Department of Conservation. “But there’s no evidence at this stage to suggest that they’re directly linked.”

As for what caused these strandings, that answer remains elusive, as well.

Marine biologists have come up with many possible reasons for why such strandings occur. It could be a navigational error, with shallow, muddy waters confusing their echolocation. It could be that one of their leaders is ill or exhausted, and the rest of the pod follows it on shore. It could be an escape from predators gone terribly wrong.

Man-made causes, such as the sonar used by military vessels, have also been linked with the kinds of disorientation that can cause mass strandings. Though Simon Ingram, a professor of marine conservation at the University of Plymouth, told the BBC that such causes could not be the only explanation.

“Pilot whales have probably been stranding in New Zealand since before people lived there. It’s probably not anything to do with what humans have done,” Ingram said. “It’s a very dynamic ecosystem that these animals are in, so I would be very cautious in making any connection between these examples and climate change.”

Lundquist said: “Marine mammal biologists, in general, have spent a lot of time over the years trying to sort out why these things are happening, of course, because nobody likes them. They’re quite tragic, and we’d rather take measures to reduce those sorts of thing — but there hasn’t been very much success in really trying to understand why they happen.”