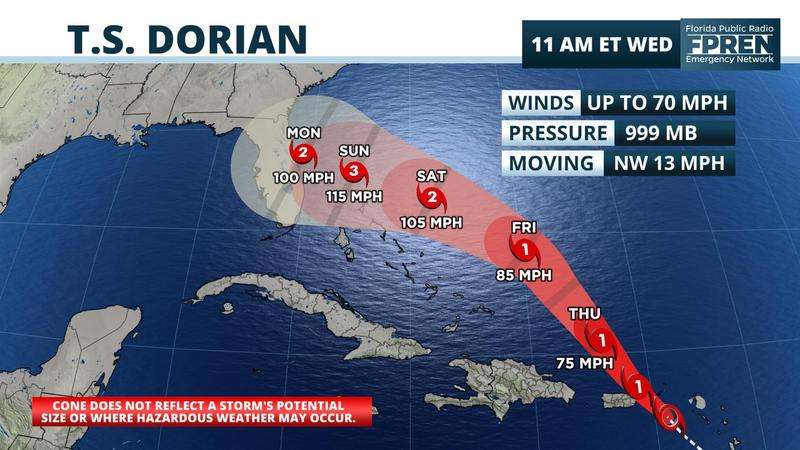 Update at 11:15 am Wednesday: Tropical Storm Dorian has strengthened and has maximum sustained winds of 70 mph, which is just shy of the 74 mph threshold for a hurricane. The National Hurricane Center says Dorian is forecast to become a hurricane soon, perhaps as early as this evening.

The center of Dorian is expected to pass over the Virgin Islands and east of Puerto Rico later today. Afterward, the storm should enter an environment favorable for strengthening over the open waters east of the Bahamas. The latest National Hurricane Center forecast has Dorian reaching category 3 status — a major hurricane — before approaching the east coast of Florida late Sunday night or Monday morning.

It is still not possible to specify exactly where the center will go. The forecast cone extends from near Miami to Savannah. All residents and vacationers are encouraged to review their hurricane plans at this time, and be prepared to act on them if necessary.

Tropical Storm Dorian has strengthened overnight as it steadily approaches Puerto Rico and the Virgin Islands. There is still uncertainty in the future path and intensity of the storm, but trends in the computer models are toward a stronger storm approaching Florida Sunday or Monday.

In its early morning update, The National Hurricane Center said Dorian is located about 85 miles southeast of St. Croix in the U.S. Virgin Islands. It has top sustained winds of 60 mph and is moving toward the northwest at about 13 mph. On its current path, the storm will pass near Puerto Rico and the Virgin Islands later Wednesday, where Tropical Storm Warnings and Hurricane Watches are in effect.

The center of the storm reformed farther to the north on Tuesday, which means the storm is less likely to move over the mountainous terrain of Hispaniola. As a result, Dorian is not likely to weaken quite as much over Puerto Rico or the Virgin Islands and be over the open waters east of the Turks and Caicos Islands on Thursday.

A strong ridge of high pressure is expected to build near the Mid Atlantic coast over the weekend, causing Dorian to turn toward more toward west in the general direction of Florida. The vast majority of the computer models forecast this scenario, but a few of the models forecast a weak trough over the Ohio Valley to disrupt the steering ridge. If this were to happen, Dorian could slow down on its approach to Florida and turn more toward the Carolinas.

Very little wind shear, warm waters, and greater moisture will surround Dorian as it approaches the Bahamas and Florida this weekend. These factors all suggest Dorian will become a hurricane on its approach. The latest National Hurricane Center Forecast makes the storm a category 2 hurricane just offshore from Florida on Sunday evening. However, in its technical discussion, the Hurricane Center said it may have to adjust the intensity forecast upward in future forecasts as several of the models are projecting a stronger hurricane.

Forecasters say that residents and vacationers should continue to monitor the progress of Dorian in the coming days and ensure they have hurricane plan in place.