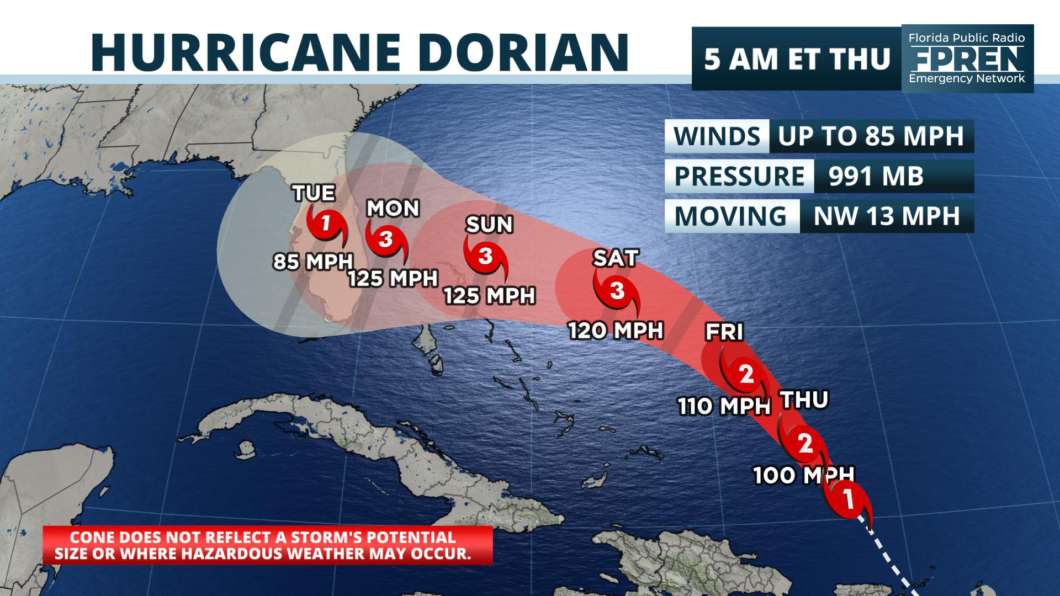 Hurricane Dorian strengthened late Wednesday night. As of 5 a.m. Thursday, The National Hurricane Center says Dorian is about 150 miles north of San Juan, Puerto Rico and has top sustained winds near 85 mph. It is moving toward the northwest at about 13 mph.

Hurricane Dorian is expected to intensify into a major hurricane as it moves into a highly favorable environment over the open waters of the western Atlantic. The storm is forecast to pass east of the Bahamas and approach Florida’s Atlantic Coast late Sunday or Monday. Tropical storm force winds (39 mph or greater) could arrive along the coast as early as late Saturday afternoon, but are more likely to arrive midday Sunday.

Exact location of landfall is unknown this far in advance and has an equal chance of occurring anywhere along Florida’s Atlantic Coastline. Coastal locations can expect damaging winds, life threatening storm surge, and localized rainfall of over 10 inches through early next week. The heavy rain may become a significant inland hazard, particularly if the storm’s forward motion slows down as is currently forecast.

The center of the storm reformed farther to the north on Tuesday, which allowed it to avoid significant interaction with any large land areas. As a result, Dorian maintained its strength and is now poised to strengthen over the open waters of the Atlantic Ocean east of the Turks and Caicos Islands on Thursday.

A strong ridge of high pressure is expected to build near the Mid Atlantic coast over the weekend, causing Dorian to turn toward more toward west in the general direction of Florida. The vast majority of the computer models forecast this scenario, but a few of the models forecast a weak trough over the Ohio Valley to disrupt the steering ridge. If this were to happen, Dorian could slow down on its approach to Florida and turn more toward the Carolinas.

Very little wind shear, warm waters, and greater moisture will surround Dorian as it approaches the Bahamas and Florida this weekend. These factors all suggest Dorian will become a hurricane on its approach. The latest National Hurricane Center Forecast makes the storm a category 3 hurricane as the center approaches Florida on Monday.

Forecasters say that residents and vacationers should continue to monitor the progress of Dorian in the coming days and ensure they have a hurricane plan in place in case they need to act upon it.