Dorian Now Category 2 Hurricane; Begins Moving Away From The Bahamas 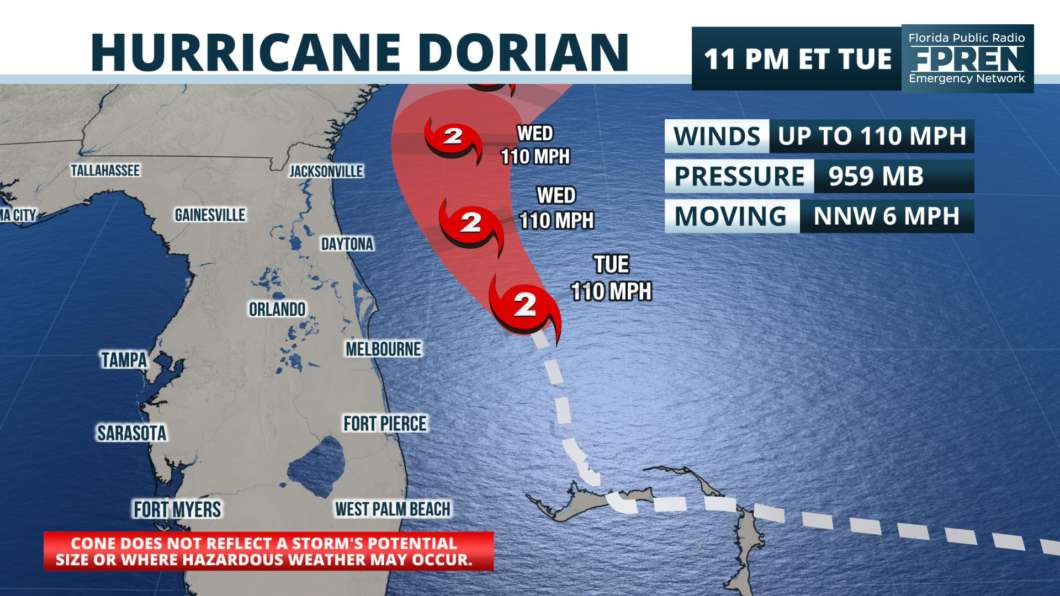 11 p.m. Update:
Hurricane Dorian, still a category 2 storm, is now heading NNW at 8 mph. Dorian is still forecast to parallel the eastern coast of Florida as it continues to gain latitude. Minimal pressure still sits at 959 mb, and the winds are sustained at 110 mph. The continually growing eye and expanding hurricane and tropical-storm-force winds are due to the gradual weakening of Dorian. Some reorganization is expected as it tracks through warm, uninterrupted waters of the Atlantic, however high vertical wind shear should weaken any gains in wind speed and expand the area of the storm as it approaches the Carolinas.

7 p.m. Update:
Dorian continues to unleash the powerful rain bands onto east-central Florida, impacting areas of Daytona to Jupiter. Heavy rain with winds sustained at 43 mph (gusting up to 60 mph) has shown rotation within these embedded storms. A handful of tornado warnings are expected throughout the evening, and residents are urged to constantly monitor the progression of these outer bands. As Dorian heads slightly to the NW, areas further inland of north-central Florida will start to feel these effects by early Wednesday morning as the hurricane tracks towards the First Coast.

5 p.m. Update:
Dorian begins to pick up speed in a northwesterly direction. The storm is now moving at 6 mph, which is the average speed of someone jogging, Hurricane Dorian continues to weaken as it heads northwest through the warm Atlantic waters. As of 5 p.m., the hurricane warning from the Sebastian inlet to the Jupiter inlet has been downgraded to a tropical storm warning, but all tropical watches/warnings south of the Jupiter inlet have been discontinued.

Maximum sustained winds are still at 110 mph, but Dorian continues to weaken this afternoon. The latest measurement of minimum central pressure is still at 959 mb and the storm is moving NW at 6 mph, according to the Tuesday 5 pm update from the National Hurricane Center.

Hurricane Dorian, now a category 2 storm, is now heading NW at 6 mph. Dorian is still forecast to follow the eastern coast of Florida as it continually tracks towards the Carolinas. Minimal pressure still sits at 959 mb, and the winds are sustained at 110 mph. The continually growing eye and expanding hurricane and tropical-storm-force winds are due to the gradual weakening of Dorian. Some reorganization is expected as it tracks through warm, uninterrupted waters of the Atlantic, however high vertical wind shear awaits towards the Carolinas. This is expected to significantly weaken Dorian as it moves along the coast. As Dorian passes North Carolina, it’s forecast to pick up speed.

WIND: Strong tropical storm force winds between 40 and 55 mph are possible across Brevard and coastal Volusia Counties Tuesday through Tuesday night. Tropical storm force wind gusts are also possible in and around the Orlando metro area Tuesday and Tuesday night, although there is still some uncertainty how far inland these wind speeds will reach.

TORNADOES: A tornado or two is possible from the outer rain squalls from Dorian at any time Tuesday through Wednesday night. Chances of this occurring are highest near the Atlantic Coast, where water spouts are also possible.

SURGE (COASTAL AREAS): A storm surge of 4 to 7 feet above ground is possible in surge prone areas near the Atlantic Coast. The combination of surge and high astronomical tides will cause severe runup of waves and water, resulting in inundation of many coastal locations. There will also be numerous strong rip currents in addition to the very large breaking waves, which will build in excess of 10 feet.

A hurricane watch was extended to the Florida-Georgia border Sunday night as Dorian continued to move slowly west across the Bahamas.

Some Florida hospitals have been evacuated.

In Brevard, residents who live on the barrier islands from Kennedy Space Center to the southern beaches should evacuate. And in Merritt Island, people in low-lying areas, in mobile homes and people with special medical needs should evacuate.

For Volusia County, mandatory evacuations began at 10 a.m. for residents who live beachside and in low-lying areas and mobile homes.

Volusia county has opened 6 special needs shelters for those with disabilities or functional medical needs.  The shelters are located at Volusia county public schools.

“We would encourage those seeking special needs shelters to get in there earlier so we make sure we have space, especially for those that are electric dependent,” said Volusia County health department’s Patricia Bowell.

Special needs shelter (assist evacuees with disabilities or functional medical needs. They are pet friendly. Evacuees and their service animals will remain in the same location)

Osceola County has issued voluntary evacuations of low lying areas and manufactured and mobile homes. A mandatory evacuation of Good Samaritan Village in Kissimmee has been ordered. The county has cancelled curfew.

Check here for a full list of mandatory and voluntary evacuation orders, as well as curfew information.

He’s also closed some ports ahead of the storm.

Volusia’s info is below:

Uber is also offering free rides, up to $20, to and from state-approved shelters.

School closure get extended as Dorian slows down

All K-12 public schools, colleges and universities will be closed Tuesday because of Hurricane Dorian.

But some schools have longer closures planned. Brevard, Lake and Orange County Public Schools will also close schools on Wednesday.

After closely monitoring #HurricaneDorian and in coordination with state and local officials regarding shelters, all OCPS schools and work locations will remain CLOSED on Wednesday, September 4. The closure includes the cancellation of all student and non-student activities. pic.twitter.com/jlwgoG6y6K

All of University of Central Florida’s campuses will remain closed through Thursday. It will continue to track the storm in deciding when to reopen. The school’s tuition and fee payment deadline is extended to next Friday, September 13th.

Stetson University plans to close its Deland and Celebration campuses.

Rollins College is closed through Wednesday.

Full Sail University plans to remain closed through Wednesday. All students were asked to remain off-campus. They plan to resume full operations 9 a.m. on Thursday.

Florida Institute of Technology has announced that its Melbourne campus is closed Tuesday, Wednesday, and Thursday. Faculty and staff are requested to return on Thursday.

Seminole State College will stay closed until at least Wednesday.

Check here for a full list of school closures from the Florida Department of Education.

Airport closures depend on locations

Orlando International Airport has announced it will have normal operations Monday. Its Emergency Operations Center will continue monitoring the storm to make changes as needed.

Sanford International Airport will also remain open Monday, although all Allegiant flights have been canceled.

Tips on how to stay safe during and after a hurricane

The Florida Department of Health says that parents should take their children’s feelings into consideration when talking to them about Hurricane Dorian.

DOH said children have three big fears during a disaster: That they will be separated from family or be left alone, that someone will get hurt or killed and that the event will happen again.

Experts said it’s important to be honest with children but also manageable when describing the possible effects of the storm. The state says hurricane kits should include two of your child’s favorite toys, favorite blankets or pillows and pictures of family and pets. Parents should also keep medications and a copy of immunization records on hand, especially the date of the last tetanus-diphtheria shot.

The American Academy of Pediatrics says parents should reassure children that adults and other helpers are working to keep them safe and that the family circle is strong. Keep an eye on adolescents, who can be hit hardest during events, don’t let children be overexposed to media of an event.

Central Floridians could lose power as a result of Hurricane Dorian. In order to avoid food poisoning, don’t eat foods that are normally kept cold unless they’ve stayed at about 41 degrees or lower.

Even if meat and eggs have been properly refrigerated, cook them to a minimum temperature of 145 degrees for about 15 seconds. All leftovers should be kept cool or thrown away.

People who cook or handle food should wear gloves or frequently wash hands after touching raw or prepared food to avoid contamination. The CDC advises people to seek medical attention for severe food poisoning if they have symptoms like bloody stools, a fever higher than 102, and frequent vomiting or diarrhea that doesn’t go away after three days.

Check here for a full list of boil water notices from Hurricane Dorian.