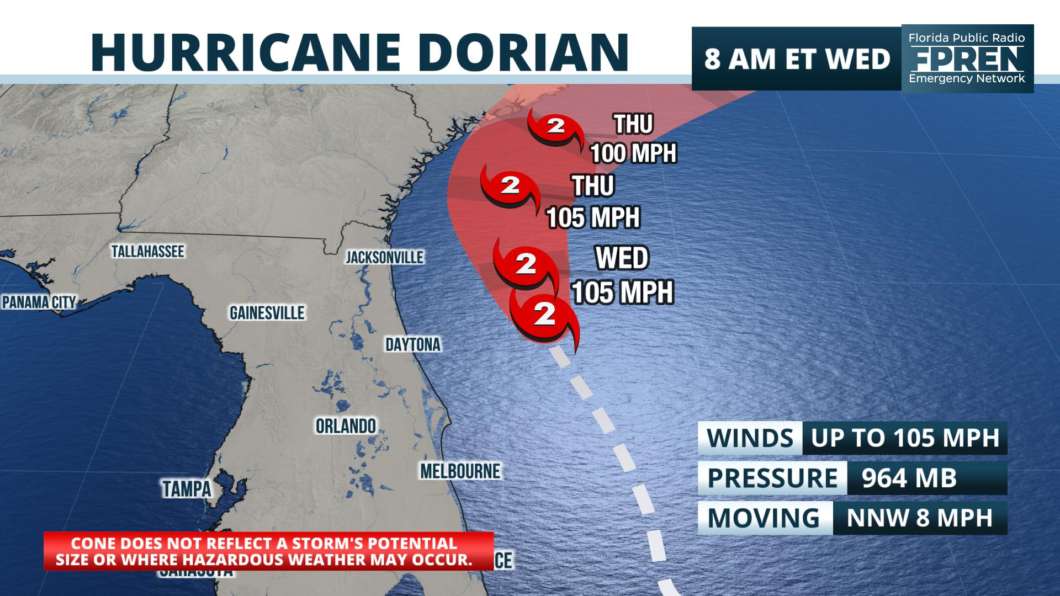 Dorian has begun to pick up speed in a northwesterly direction.

The storm is now moving at 8 mph and it continues to slowly weaken as central pressure rises. Rain bands continue to occasionally move across coastal and some inland areas; however, bands in general seem to be breaking apart before making it as far as the I-75 corridor.

Maximum sustained winds are still at 105 mph, and minimum central pressure has held steady at 964 mb this morning. Dorian is moving NW at 8 mph, according to the Wednesday 8 a.m. update from the National Hurricane Center. The forecast changed very little at 11 a.m.

Hurricane Dorian, still a category 2 storm, is now heading NNW at 8 mph. Dorian is still forecast to parallel the eastern coast of Florida as it continues to gain latitude. Minimal pressure still sits at 964 mb, and the winds are sustained at 105 mph. The continually growing eye and expanding hurricane and tropical-storm-force winds are due to the gradual weakening of Dorian. Some reorganization is expected as it tracks through warm, uninterrupted waters of the Atlantic, however high vertical wind shear should weaken any gains in wind speed and expand the area of the storm as it approaches the Carolinas. Dorian is expected to merge with a trough of low pressure as it approaches the Carolinas, and this will likely enhance the rain and wind on its western side of the storm.

Meteorologist Ray Hawthorne said the core of the hurricane is expected to remain offshore but tropical storm force conditions are likely for the Space Coast and First Coast areas until this evening.

“The long-awaited turn toward the north-northwest we’ve been expected has materialized,” said Hawthorne.

“Storm surge flooding is still concern, especially along the First Coast, where 3 to 5 feet of surge is possible. 3 to 5 inches of rain is also anticipated, but conditions should begin improving late tonight as the hurricane finally pulls away from the state.”

Hawthorne said concern is growing over the Carolinas, where Dorian may still make a direct landfall on Thursday or Friday. Hurricane Warnings are up for the entire South Carolina coast and a portion of the North Carolina coast.

9/4 – 6:46 AM | Remain cautious of strong wind gusts and brief bursts of heavy rain in passing squalls today. Conditions at beaches are hazardous from #Dorian. The surf remains high and rough, along with a threat of coastal flooding & beach erosion. Stay away from these dangers. pic.twitter.com/T4p71iTLEn

Brevard County lifted its evacuation orders Wednesday morning. The county said it is now working to consolidate shelters and urges residents to use caution when driving on roads.

In Volusia County, all bridges are open. The county plans to shut down all shelters at 11 a.m. except the shelter at the Volusia County Fairground.

The Florida Division of Emergency Management reported 19,271 power outages across the state, including 6,900 in Volusia County and 1,900 in Brevard County.

Bridges to the barrier islands were closed overnight as wind speeds picked up. Emergency officials say they’ll be reopened after inspection.

Both North Causeway and South Causeway in New Smyrna Beach are closed.

The ISB and Seabreeze bridges are limited access based on Daytona Beach PD’s discretion.

9I4I19 7:15AM: The BCSO is securing the causeways/bridges to allow FDOT to verify the bridges are safe to travel and confirm no life/safety issues on the barrier islands. Once confirmed, all bridges will be released to open at the same time.

“Noon was determined to be the earliest time Orlando International could reasonably resume normal operations, allowing time for damage assessment, sweeping the airfield for debris, security preparations, staff call backs for airport and federal agency employees and preparations for ground service equipment,” the airport said in a statement.

Passenger are urged to contact their airlines prior to arriving at the airport to ensure flights are available.

Volusia: Closed until Thursday, although all school activities Friday will end by 6 pm.

Seminole: Schools will reopen Thursday. Make-up days are October 17 and 18.

Orange and Osceola: Closed Wednesday and back on Thursday.

University of Central Florida: Closed through Thursday, open on Friday

The city will resume normal operations Thursday. “Our community heeded the hurricane warnings and took preparations seriously,” said Orlando Mayor Buddy Dyer. “We are fortunate to have avoided a direct hit from this devastating storm. Our hearts are with the people of the Bahamas as they begin the long process of recovery.”

The City will begin garbage and recycling collection, to include missed garbage collections, on Thursday, September 5, 2019 at 6 a.m. City Solid Waste crews will be following the below pickup schedule to ensure all missed routes are picked up before regular collection resumes next week.