With Specter Of Impeachment Looming, Trump Talks Health Care In The Villages 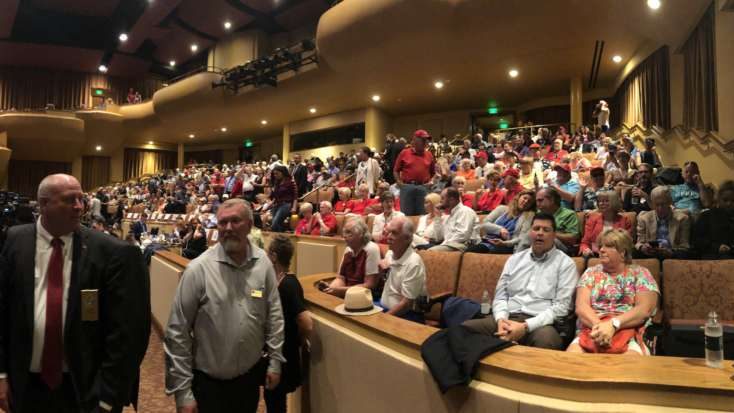 President Donald Trump signed an executive order in The Villages positioned as a response to Bernie Sanders' Medicare For All bill.

President Donald Trump was in The Villages yesterday touting his plan for health care, looking to contrast himself from Democratic presidential candidates.

While the stop was an official White House event, Trump worked to court the voters of the Central Florida retirement community. But the visit was overshadowed by the Democrats’ looming impeachment inquiry.

Health care is a key issue for voters in the fast growing community for residents 55 and older. Villages residents said they’re concerned about health insurance, and the cost of prescription drugs.

“It’s a huge issue. I am on Medicare,” Schweitzer said. “In addition to the premiums that we pay every month, my husband is on a very expensive medication and when he is in the donut hole, it costs over $700 for one prescription.”

Myra McElheney works in health care. She says Trump is a big backer of Medicare.

“That is one of the main reasons I still work, is because I need health insurance,” McEleheny said. “So yeah, health care is really big on my list.”

Speaking to an invite only crowd, the President backed Governor Ron DeSantis’ plan to import drugs from Canada, which is still waiting for federal approval. That approval would come from the head of Health and Human Services, Alex Azar, who was with Trump during the visit

A Vietnam veteran just spoke about his experiences getting treated for cancer. He says Medicare for All will overload the system, make it Medicare for none.

The president signed an executive order in The Villages aimed at protecting Medicare from what he called a “socialist takeover.” The order itself references Senator Bernie Sanders’ Medicare For All bill.

“Rather than upend Medicare as we know it, my Administration will protect and improve it,” the order reads.

There were things in the executive order Trump didn’t talk about. For example, it tasks federal agencies with leveling the prices paid for medical services, regardless of whether the services are done in a hospital or a doctor’s office. It’s an idea called site neutrality.

And the order wants to give Medicare Advantage plans more leeway to seniors incentives to have better health – including”to allow Medicare beneficiaries to share more directly in the savings from the program, including through cash or monetary rebates, thus creating more incentives to seek high-value care.”

“I think the President and this administration is trying to focus on an area where there’s a lot of uncertainty right now, certainly with any of his potential opponents next year,” Torres said. “Everyone has a different plan for healthcare and there’s a few different ways to do it.”

But the event was overshadowed by a looming impeachment inquiry happening back in Washington, D.C. While supporters filled the Spanish Springs Town Square to watch President Trump speak on a Jumbotron, opponents took the opportunity to protest.

“It would be nice if he could come out and admit to his wrong doings so we can address them and move on as a nation,” said Chris Stanley, the president of the Villages Democratic Club.

But protesters were far outweighed by supporters.

“This isn’t an impeachment,” said supporter Tommy Good. “This is just another attempted coup against our government, against we the people.”

Police make a barricade between protestors and counter protesters ahead of @realDonaldTrump speech in The Villages @wmfeorlando @895WMFV pic.twitter.com/dqW2kXkvgu

In the Villages, residents are waiting for @realDonaldTrump to arrive. @wmfeorlando @895WMFV pic.twitter.com/770oJW3pkK

“But if this thing drags out way too long, this spring and summer and we’re still talking about if they’re going to do it, that’s going to be a big problem for Democrats going into the 2020 elections and I think it could work well for the president,” Henry said. “He has done a really good job defending himself.”

University of Central Florida Political Science Professor Aubrey Jewett said holding onto his supporters, like the residents of The Villages, will be key to the 2020 election for Trump. Jewett said Trump can help keep his older Republican base in the Villages on his side by touting his commitment to Medicare.

But he will need more support from moderates and independents, especially with the impeachment inquiry moving ahead.