Doctors Say Hospitals Are Stopping Them From Wearing Masks 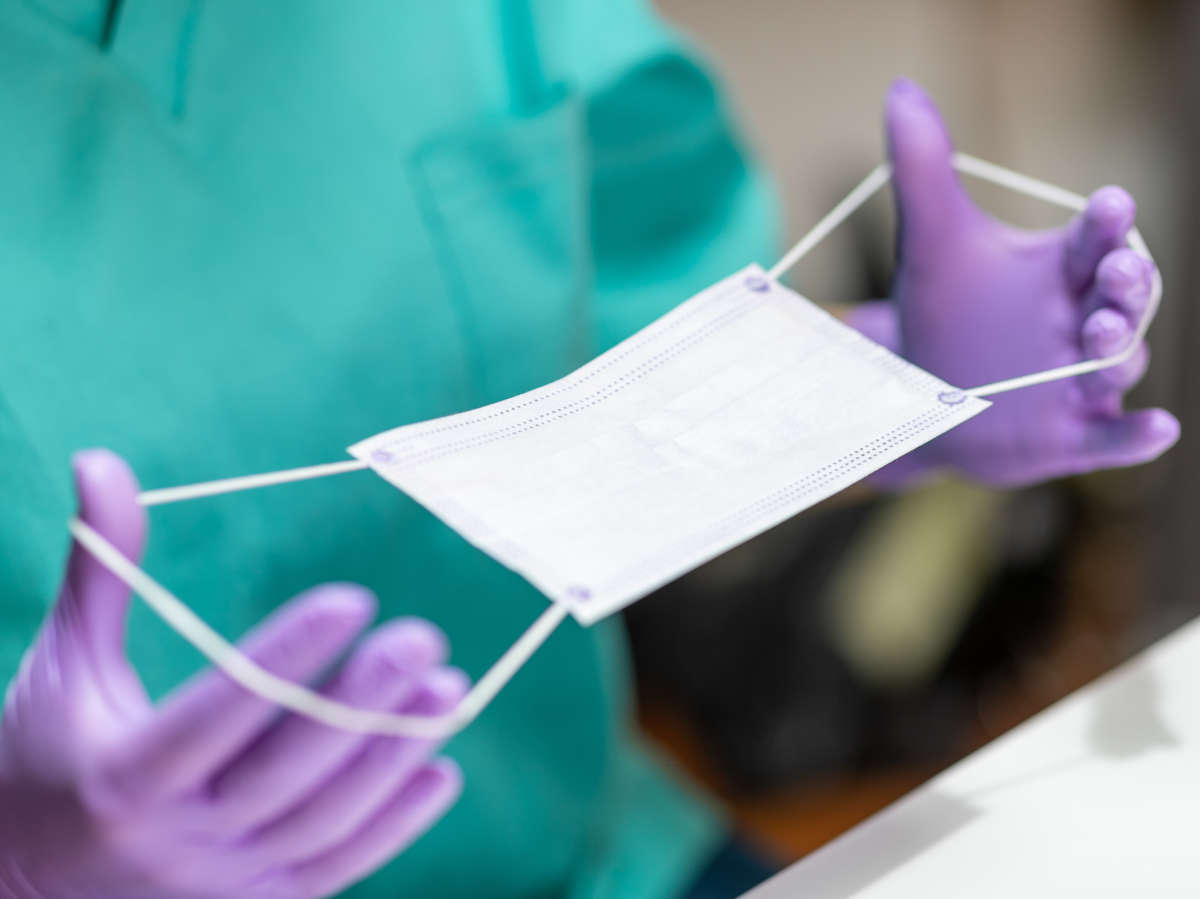 Some doctors say they are being told they can't use their own personal protective equipment, such as gloves and masks.
Image credit: zoranm

Neilly Buckalew is a traveling doctor who fills in at hospitals when there’s need. So in the midst of this pandemic, she feels particularly vulnerable to contracting the coronavirus — not just in hospitals but in hotels and on her travels.

When she got an assignment last week at Saint Alphonsus Regional Rehabilitation Hospital in Boise, Idaho, she packed her own personal protective equipment and drove to town. She disinfected her hotel room and stayed away from other guests but worried about the coughing person in the room next door. So she donned her own fitted N95 mask that she uses for work.

That first day at work, Buckalew said she was told to take off her mask.

When she asked hospital administrators why, the reasons kept changing. First Buckalew said she was told it was against hospital policy for health care workers to bring their own gear. Then, she said, administrators told her if she wore her own N95 mask, others would want to wear the masks as well and the hospital didn’t have enough. Finally, Buckalew said, it was that CDC guidelines don’t require the mask at all times.

Refusing to take off her mask, she said, got her terminated. Then, she said after complaining she was reinstated and then terminated again — all within three days.

“I’m raising a huge big stink because it’s wrong. It’s unsafe. We’ll never flatten the curve if hospital systems keep acting this way,” she said, adding that she’s speaking now because she’s already lost her assignment and wanted to speak on behalf of those who can’t. “A lot of people can’t speak out because they’re afraid, or they know that they’ll be fired.”

Buckalew’s account lays bare tensions between some hospital systems and health care workers on the front lines of this disease. Many doctors, nurses and other hospital workers say they don’t feel protected and are afraid in the midst of a shortage of masks and other protective gear. Some are bringing their own supplies donated by friends and family or purchased at hardware stores. Meanwhile, some hospitals are instituting strict policies that bar medical workers from bringing their own personal protective equipment, or PPE, to work, or limiting how much protection a person can wear because of a shortage in supplies.

Leaders at the American Academy of Emergency Medicine says they have heard accounts like Buckalew’s from health care workers across the country.

“We’re hearing a lot of people saying that ‘I’m not getting adequate PPE at my job, so I was able to buy PPE and I’m using what I buy,'” said Dr. Lisa Moreno, the president-elect of AAEM.

Moreno said about two dozen people have formally complained to her organization. She said they’ve also received hundreds of calls from health care workers who are afraid to lose their jobs if they complain, but also feel that hospitals aren’t letting them do what they need to do to protect themselves against an infectious and new virus. A virus that causes a disease that has killed dozens of healthcare workers in Italy and already taken the lives of at least two healthcare workers at the epicenter of the spread in the New York City metro area.

“It seems that the hospital administrations are reacting to the fact that they are failing to provide adequate PPE for their staff,” Moreno said. “And when one individual provides adequate PPE, it seems to highlight that fact to the other staff who haven’t been able to purchase it.”

These types of masks are very hard to come by. A quick search at Home Depot shows pretty much every type of protective mask is out of stock. And everyone from federal and local officials to hospital administrators are struggling to get their hands on as much personal protective equipment as they can in the midst of this pandemic.

So Moreno says it’s vital that health care workers are allowed to do what they feel they need to, to feel safe. Because if they get infected, not only could they get very ill or give it to patients, but there would be fewer skilled health care workers to treat sick patients.

She said she’s also received complaints that hospital administrators are telling health care workers how much personal protective gear they can wear at work and when. Some doctors and nurses who want to wear their N95 masks at all times are being told no, she said, adding that one doctor told her that he needs to be extra careful because his son has cancer.

Then there are cases like Henry Nikicicz in El Paso, Texas. He’s an anesthesiologist, so he does intubations on patients. He’s 60, has asthma and is particularly vulnerable to upper respiratory infections.

Two weeks ago, he was intubating a patient for respiratory distress on his overnight shift at the University Medical Center of El Paso. He walked into the hallway and saw people gathered in a group, so he slipped on his hospital-issued N95 mask.

The next day a hospital supervisor told him he wasn’t allowed to wear the N95 mask when he wasn’t in the operating room or treating a patient with an infectious disease, because they are costly and in short supply. Nikicicz was also told he was scaring the patients. The supervisor texted him that he could get a “regular mask” if he felt he needed one.

When Nikicicz responded that he is susceptible to upper respiratory infections, the supervisor’s texts appeared to get more aggressive. He referred to the coronavirus as the “Wuhan virus,” a term that many say is not only inaccurate but stokes xenophobia. He texted in all capital letters that Nikicicz was the only one in the entire hospital wearing an N95 mask and that he would not be able to get one when the “real virus” comes in. Nikicicz texted back: “The real virus is here already.”

Nikicicz is an independent contractor who works with a placement company Somnia Anesthesia. He said he got a call from the company asking for his side of the story. He was told hospital administrators had complained. After that, Nikicicz said he was told not to go into work on Monday.

“I protect myself and protect the environment in case I am infected. In a situation like this, when we have social distancing, wearing a mask is one of the basic ways of stopping the spread of the virus,” Nikicicz said. “And I really feel that injustice was done to me because of the fact that the right thing to do is to wear a mask. To punish me for wearing a mask is something that I really feel is wrong.”

The University Medical Center of El Paso said in a statement that Nikicicz was removed from the schedule by Somnia Anesthesia for “insubordination.”

“The anesthesiologist was told on numerous occasions by his supervisor to not wear the N95 surgical mask while not in the Operating Room area or while not treating patients with infectious disease,” the statement said. “UMC is not unlike other hospitals in its efforts to conserve N95 surgical masks, especially when it comes to wearing them when not in the surgical/OR area. At the time of these incidents, the CDC did not require masks (and certainly not N95 masks) to be used by hospital staff when not treating patients or while in surgical/OR areas. Beyond this, we view this as a personnel matter between Somnia Anesthesia and its contracted anesthesiologist. ”

Hours after NPR reached out to the hospital, Nikicicz was put back on the schedule.

Marc Koch, president and CEO of Somnia Anesthesia, said that Nikicicz was not removed for insubordination. Koch said he was briefly taken off rotation because elective surgeries are cancelled and hundreds of contract workers are being laid off.

“To be frank, I was trying to reach out to him to try to get him to come back. At no point was he terminated,” Koch said. “He didn’t listen to his chief, yes he was not listening. But what we were trying to do was see our way through that and help him and reconcile that issue.”

Koch said protecting doctors has been his number one goal, even securing N95 masks to supply to hospitals that couldn’t find any.

“The clinicians want to be safe. They want to meet or exceed the CDC guidelines,” Koch said. “And the hospitals fear a run on supplies and [causing] patient anxiety.”