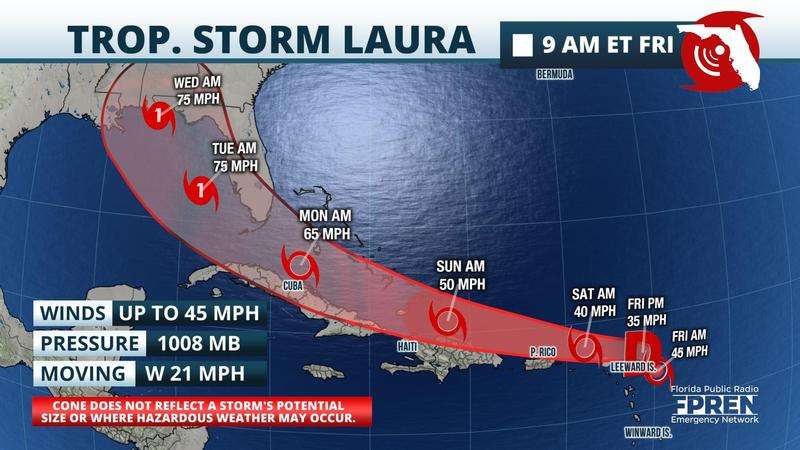 Reconnaissance aircraft found that Tropical Depression 13 strengthened to Tropical Storm Laura in the eastern Caribbean Sea about 230 miles east-southeast of the Leeward Islands. The tropical storm is disorganized, but is expected to bring squally weather to the islands today. There have been no changes to the forecast track or anticipated intensity of the storm, but an update will be issued around 11 AM Friday with possible adjustments.

Original Story from 8:00 AM Friday:

Tropical Depression 13 remains disorganized as it approaches the Leeward Islands, but forecasters say it still may pose a threat to portions of Florida early next week.

Dry Saharan air from the African continent and wind shear have prevented the depression from strengthening at all. In fact, Hurricane Hunters flying through the depression Thursday evening suggested the depression may have become a tropical wave, but the National Hurricane Center said data early Friday morning was ambiguous and the system remains a tropical depression for now. It is located less than 300 miles from the northern Leeward Islands and is moving quickly toward the west-northwest near 21 mph.

The forecast track takes the center of the depression near or just north of the Virgin Islands and Puerto Rico Friday night and Saturday morning, and then near or north of Hispaniola and Cuba Saturday night into Sunday. If the circulation center stays intact and over the water, it may have an opportunity to strengthen into a tropical storm. However, a track over Hispaniola or Cuba would likely cause the system to hold steady in strength or weaken.

The exact track of the storm will determine the magnitude of impacts to Florida early next week. The forecast cone shifted southward and now calls for the center of the system to pass anywhere from Cuba to South Florida on Monday. A northwestward track would the center between the western Florida Peninsula into the eastern Gulf or Panhandle Monday night into Tuesday. There is a high degree of uncertainty in the strength of the cyclone as it passes near or over Florida. In their early Friday morning discussion, the National Hurricane Center said possibilities range from a tropical wave to a major hurricane based on the various computer model simulations. If rain and tropical storm force winds were to impact the state, they would most likely arrive over South Florida Monday morning, the western half of the peninsula Monday afternoon and night, and the Panhandle on Tuesday.

Forecasters urge residents to monitor the storm occasionally this weekend and to have hurricane kits and plans ready because of the large uncertainties in the storm’s path and intensity.