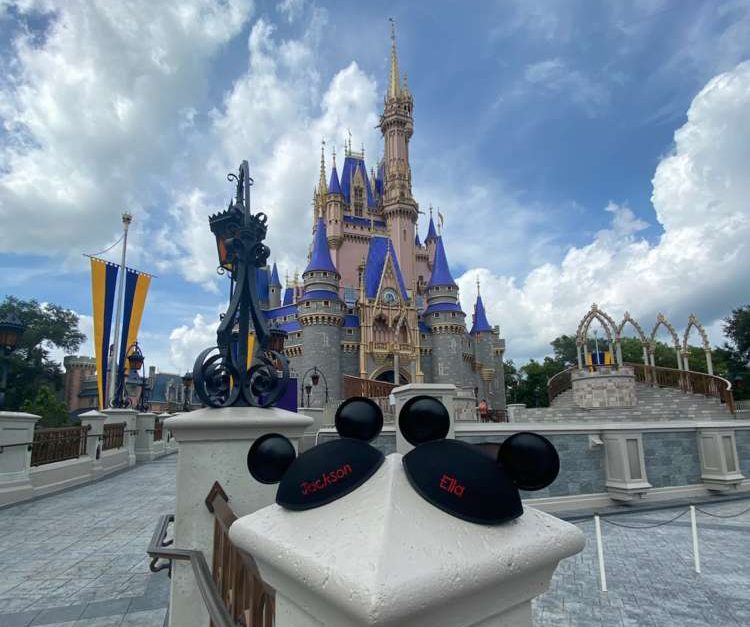 The Magic Kingdom had a fraction of the usual summertime crowd for its reopening on July 11th. Photo courtesy of Kelly Pfeiffer.

Walt Disney World is open again- four months after the theme parks closed because of coronavirus.

The Magic Kingdom and the Animal Kingdom opened to the public on a weekend that saw Florida setting a grim record: more than 15,000 COVID-19 cases reported in a single day.

For Disney fans, it was a trip to the Magic Kingdom like no other.

Crowds were limited with a reservation system, and the company rolled out a range of safety measures- like temperature checks, hand sanitizing stations, and social distancing on rides.

“I was extremely concerned, we almost didn’t go because I was so nervous,” said Kelly Pfeiffer.

She and her wife Jaci debated whether to take their kids to one of the annual passholder preview days.

“We’ve been staying inside and, like, self quarantining and just being real safe because we have twins that are 13 months old,” she said.

They ended up going on Friday. Kelly said it felt like they had the park to themselves.

“Our daughter was running and her shoe fell off and Cinderella said ‘Oh, just like me,’ and like, they interacted with them personally, where it wasn’t like when there’s thousands of kids standing there and they just kind of put on a show. It felt more personal. And I think it was almost like more Disney Magic than usual.”

Jaci Pfeiffer said it was one of the best days they’ve had at Disney, but they haven’t decided when they’ll be back.

“If it’s more crowded, if things come up that, you know, seem unsafe, we still might end up canceling our passes. But after our experience on Friday, I would say it’s more likely that we’ll keep them than not.”

Seth Kubersky, one of the co-authors of the Unofficial Guides and a columnist for the Orlando Weekly, said the park felt just about as empty Saturday as it did during Thursday’s annual passholder preview.

“I can definitely get used to just literally walking on to Peter Pan without having any wait at all. Normally, that’s something that you’d wait an hour or so if you didn’t have a fast pass,” said Kubersky.

“But at the same time, it’s not the same Park experience because it’s just not as social. As someone who’s used to coming into the parks as a solo traveler, used to striking up conversations with strangers in the queue and chatting with people walking through the streets and people don’t do that,  people are staying in their own bubbles.”

Stephanie Bailey, an annual passholder from Mississippi, was also enjoying the “new normal” at the Magic Kingdom Saturday.

“It’s kind of old school Disney, like not having to worry about Fastpass or three-hour lines,” said Bailey.

Serena Lynn, a blogger who runs the vacation website Living By Disney was hesitant about going on Saturday after four months of staying home.

“I think everybody’s got to decide what they’re comfortable with,” said Lynn.

“But I think if you’re comfortable with going to the grocery store, or to Target or any of those types of things, it’s no different. They definitely kept you as safe as possible and made you feel like, you know, you weren’t taking undue risks.”

She said the experience at the park was both strange- and familiar.

“We’re in a place where for many people, they’re craving that escape or that Disney magic, more than ever, to get a little bit of that, I think really means more to people, even if it is a modified experience.”

Epcot and Hollywood Studios are set to open on Wednesday.