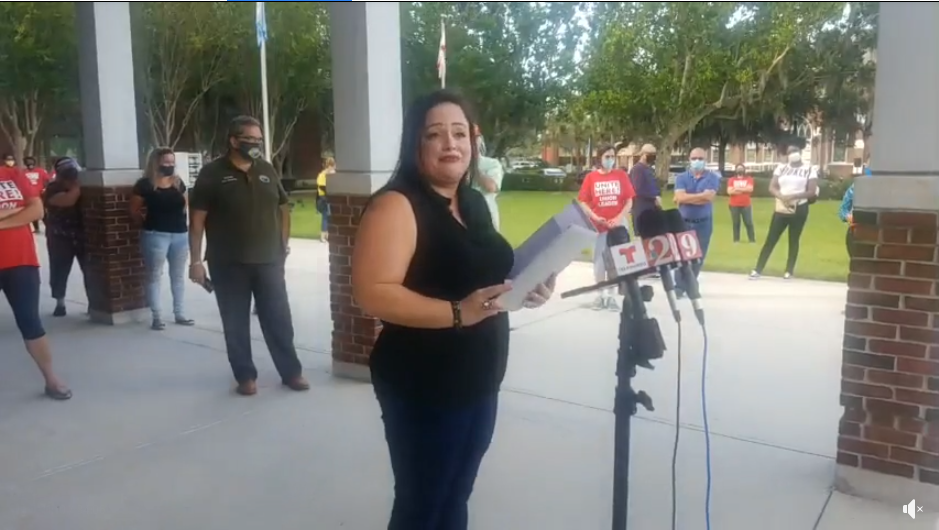 Disney employee Sally Nieves said she hasn't received any unemployment benefits from the state since applying back in April. She's calling for an overhaul of Florida's system. Photo: Facebook

Disney employees are heading back to work as the parks and resorts begin reopening this summer. Union leaders said many of those workers never received unemployment benefits while furloughed.

When those workers were furloughed back in April, Disney said it would upload employee information to the state unemployment system to help fast-track benefits.

Unite Here Local 737 represents some 19,000 Disney workers. A union poll found 30 percent of members have yet to receive any unemployment benefits from the state.

“When we hear that the economy is reopening and everything’s okay, that is not true. Things are not okay. Families are suffering workers are out of work, they’re not getting any money from this broken unemployment system,” said Unite Here Local 737 president Jeremy Haicken.

“I am here to tell you that I have not received one cent from the [Department of Economic Opportunity] since I applied on April 19,” said Sally Nieves, a bartender at Disney’s Polynesian Resort. “I have lost count of how many hours I spend in front of the computer trying to figure out a miracle and be able to make ends meet, to give my family some peace of mind.”

Union leaders said other members have been deemed ineligible despite years of full-time work at Disney. Ffor some, federal benefits distributed by the state abruptly stopped.

According to the Florida Department of Economic Opportunity, 92 percent of eligible claims have been paid out — but 164,906 applications are still under review and 484,361 were deemed ineligible for state or federal assistance.

Haicken said only about 2,000 of his members have returned to work. Disney announced a phased reopening of its Florida parks starting in mid-July.