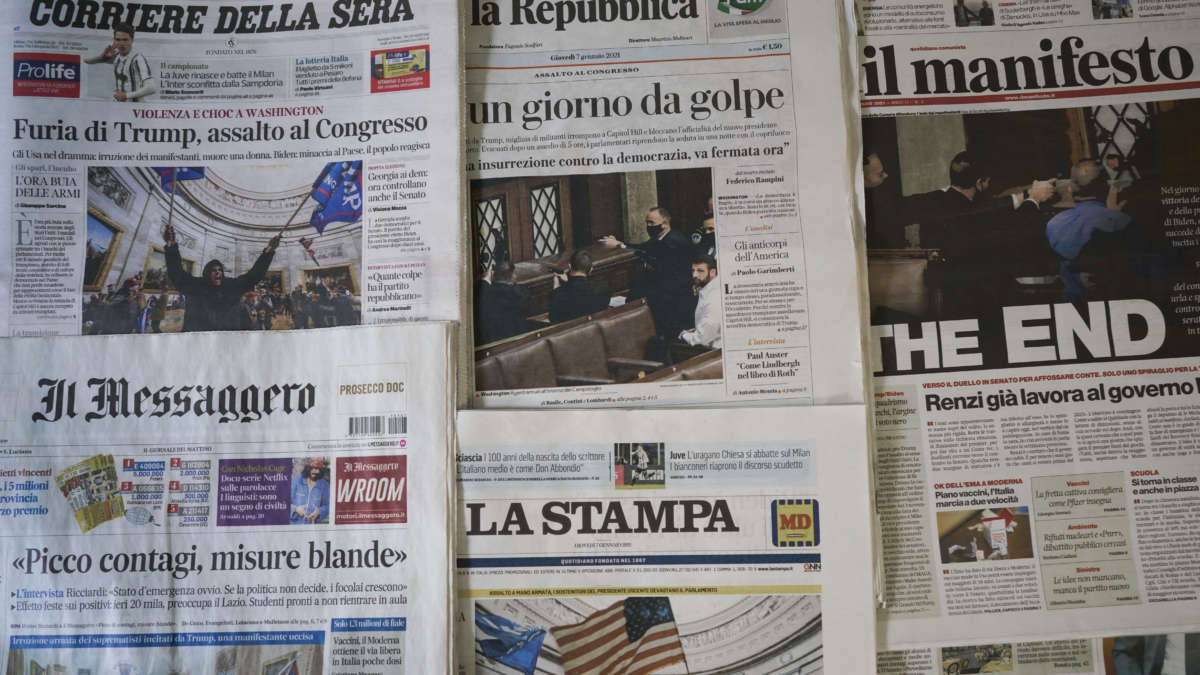 Italian papers show the chaotic scenes from Washington, with one headline declaring "The End." Others proclaim, "Gunshots on Democracy" and "USA – Day of the Coup." World leaders are reacting with shock and dismay to the assault on the Capitol.
Image credit: Andrew Medichini

World leaders are condemning pro-Trump extremists’ storming of the U.S. Capitol in a futile bid to stop members of Congress from certifying the Electoral College ballots for President-elect Joe Biden. The spectacle transfixed people around the globe.

“Disgraceful scenes in U.S. Congress,” Prime Minister Boris Johnson of Britain tweeted. “The United States stands for democracy around the world and it is now vital that there should be a peaceful and orderly transfer of power.”

Italian Prime Minister Giuseppe Conte said, “Violence is incompatible with the exercise of democratic rights and freedoms.” He added, like many leaders, that he believes U.S. governing institutions are robust enough to withstand the assault.

As NPR’s Sylvia Poggioli reports, “Many public intellectuals in the birthplace of fascism described the scenes in Washington as reminiscent of events in Italy in the 1930’s.”

Images of violence and confusion in the U.S., which often casts itself as a role model for democracies, made German Chancellor Angela Merkel both angry and sad, she said.

“A basic rule of democracy is that after elections there are winners and losers,” Merkel said. “Both have their part to play with decency and responsibility so that democracy itself remains secure. And I very much regret that President Trump has not admitted defeat since November and failed to do so again yesterday.”

German Foreign Minister Heiko Maas warned, “Insurgent words turn into violent acts.” And noting the wider effect, he said in a tweet, “The enemies of democracy will be delighted at these terrible images from Washington DC.”

Israeli Prime Minister Benjamin Netanyahu commented on the insurrection Thursday as he began a meeting with Treasury Secretary Steven Mnuchin in Jerusalem. He noted that for generations, American democracy has inspired millions of people, including him.

“Lawlessness and violence are the opposite of the values we know Americans and Israelis cherish,” Netanyahu said. “The rampage at the Capitol yesterday was a disgraceful act that must be vigorously condemned. I have no doubt that American democracy will prevail — it always has.”

Official reaction has been muted in Russia, where many people are celebrating the Orthodox Christmas holiday. President Vladimir Putin spent Orthodox Christmas Eve attending mass in a small church at a remote lake, for instance. But his foreign ministry addressed the chaos in the U.S. capital.

“The events in Washington show that the U.S. electoral process is archaic, does not meet modern standards and is prone to violations,” Foreign Ministry spokeswoman Maria Zakharova said, according to state-run RIA Novosti news agency. She added, “We wish that the friendly American people will survive this dramatic moment in their own history with dignity.”

Canadian Prime Minister Justin Trudeau said he was monitoring the situation closely and with concern.

“I think the American democratic institutions are strong, and hopefully everything will return to normal shortly,” Trudeau told the News 1130 Vancouver radio station, according to Reuters.

In Iran, President Hassan Rouhani said, “What we saw in the United States last night showed annihilation of Western democracy in the world,” according to the Mehr news agency. He added, “Everyone saw what a populist did to his country and damaged his country’s reputation in the international arena.”

Dmytro Kuleba, Ukraine’s minister for foreign affairs, called for the situation to be quickly resolved for the good of the U.S. and other democratic countries.

“While people in Palestine & in many other places in the world are struggling to achieve democracy, there are those in the US who are actively sabotaging theirs,” Palestinian official Hanan Ashrawi tweeted. “Despots everywhere thrive on repression, oppression, & violence.”

Israeli opposition leader Yair Lapid tweeted he was “deeply saddened and shocked” at the events.

“We hope to see order restored and the transition of power completed,” he wrote. “America needs to go back to being a role model for democracies across the world.”

NATO Secretary-General Jens Stoltenberg wrote that the “outcome of this democratic election must be respected.”

The speaker of the Turkish Parliament, Mustafa Sentop, tweeted that in Turkey “we have always been in favor of the law and democracy and we recommend it to everyone.”

The comment was seen as ironic, coming from a senior member of President Recep Tayyip Erdogan’s ruling party. In May 2017, members of Erdogan’s security detail made headlines when they attacked demonstrators protesting Erdogan’s invitation to the White House to meet Trump.

A presidential spokesman said Turkey was “following developments in the US with concern,” while the foreign ministry warned Turkish citizens in the U.S. to avoid crowds.

Irish lawmaker Brendan Howlin referred to the events as “the inevitable final phase of Trumpism.”

This story was originally published on Wednesday, Jan. 6. It has been updated with the latest comments from world leaders.