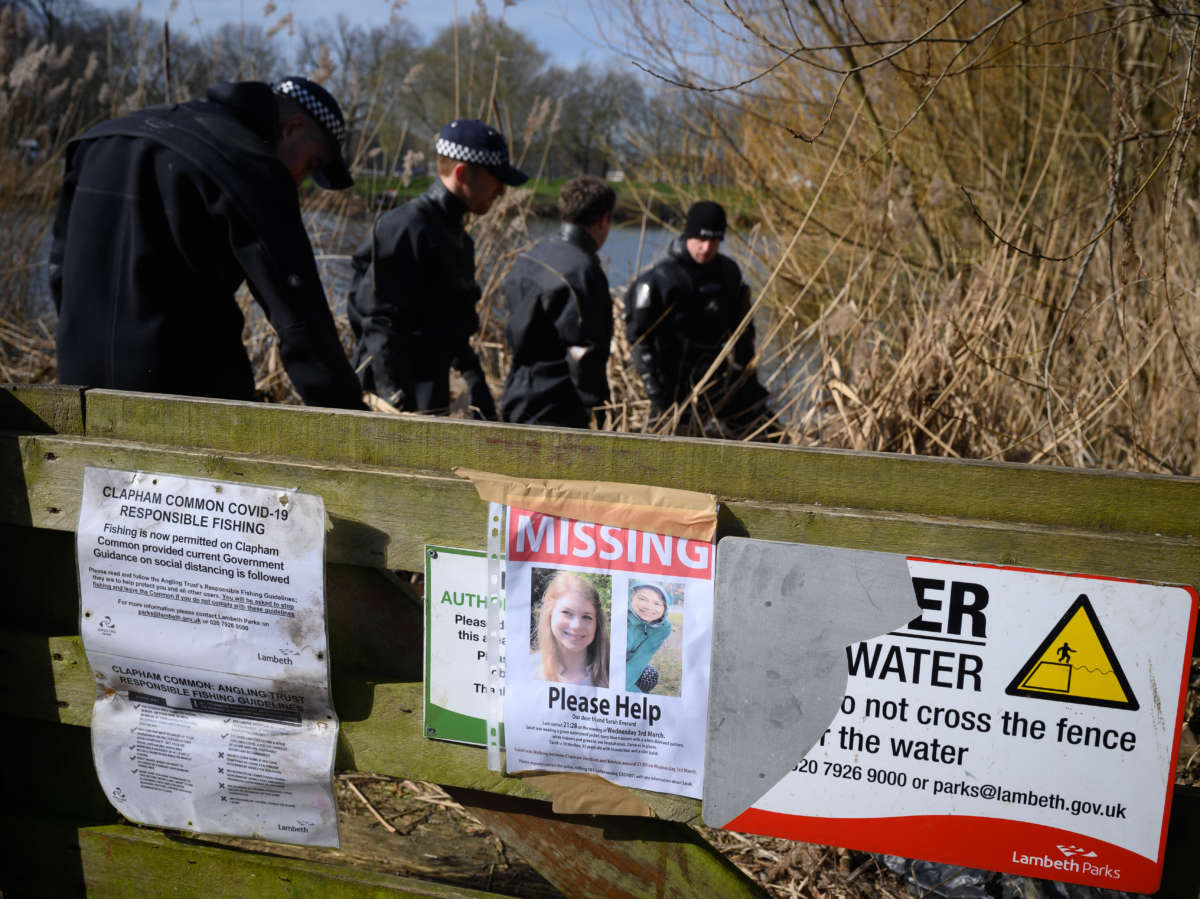 The search for Sarah Everard brought police on March 9 to Mount Pond in Clapham Common, where a poster asks the public for help locating the missing London woman. Authorities said the next day that officers found what they believe to be human remains in a wooded area in Kent.
Image credit: Leon Neal

One week after 33-year-old Sarah Everard disappeared while walking home alone at night from a friend’s house in South London, police said they have discovered what appear to be human remains and have arrested an officer on suspicion of murder.

The high-profile case is unleashing an outpouring of grief and anger across the U.K., where women are taking to social media and the halls of Parliament to share their experiences and demand that violence against women be taken more seriously.

“Many women have shared their stories and concerns online since Sarah’s disappearance last week,” U.K. Home Secretary Priti Patel said in a statement. “These are so powerful because each and every woman can relate.”

Everard was last seen on surveillance footage walking home from a friend’s house in the Clapham area of London on the evening of March 3, according to the Metropolitan Police, which says it is unclear whether the marketing executive made it back to her home address. In the days after she was reported missing, investigators visited some 750 homes, scoured closed-circuit TV footage and took at least 120 calls from members of the public as part of their extensive search.

On Tuesday, authorities arrested an unnamed Metropolitan Police officer in his 40s on suspicion of kidnapping. They also arrested a woman in her 30s, at the same Kent address as the officer, on suspicion of assisting an offender.

New details emerged on Wednesday, when police announced that the man had been “further arrested” on suspicion of murder and a separate allegation of indecent exposure. They identified him as a serving officer in the Parliamentary and Diplomatic Protection Command whose primary role was “uniformed patrol duties of diplomatic premises.”

“The news today that it was a Metropolitan Police officer arrested on suspicion of Sarah’s murder has sent waves of shock and anger through the public and through the whole of the Met,” said Police Commissioner Cressida Dick. “I speak on behalf of all my colleagues in the Met when I say we are utterly appalled at this dreadful news. Our job is to patrol the streets and to protect people.”

Assistant Commissioner Nick Ephgrave clarified that the officer was not on duty at the time of Everard’s disappearance.

That same day, search teams investigating Everard’s disappearance found what they believed to be human remains in an area of woodland in Kent. Dick said authorities were not able to confirm any identity “at this early stage,” adding it may take “some time.”

In the wake of the announcement, Prime Minister Boris Johnson tweeted that he was “shocked and deeply saddened” and urged authorities to work fast to solve the crime. Scores of women posted messages of horror and sorrow on social media with the hashtag #shewaswalkinghome.

Many said the Everard case hit close to home, recalling their own experiences with street harassment and the precautionary measures they have been forced to adopt, such as planning safe walking routes along well-lit streets, wearing shoes they can run in and talking loudly on the phone or keeping their keys in hand while walking.

Some women shared tips and resources, like an app that is programmed to detect a “panic scream” and alert an emergency contact.

“This Sarah Everard situation is really scaring me, because she literally spoke to her [boyfriend] on the phone, wore really bright clothing, walked on a main road, was outside before 12am, and she still got killed?” wrote one woman in a tweet that has garnered more than 97,000 likes. “Do you know how scary as a woman it is to know that?”

In her remarks on Wednesday, Dick acknowledged that many people are unsettled by Everard’s disappearance, and she reassured them that there would be continued high levels of police patrols in the area.

“I know Londoners will want to know that it is thankfully incredibly rare for a woman to be abducted from our streets,” she said. “But I completely understand that despite this, women in London and the wider public — particularly those in the area where Sarah went missing — will be worried and may well be feeling scared.”

Social media users and women’s rights advocates responded in kind that while off-the-street kidnappings are relatively rare, the fear that many women face while walking alone, especially at night, is pervasive. So are instances of violence against women in general, they added.

More than 70% of women and girls in the U.K. have experienced sexual harassment in public spaces, according to data released by UN Women United Kingdom on Wednesday.

Jess Phillips, a Labour Party member of Parliament who serves as the shadow minister for domestic violence and safeguarding, said in a television interview that violence that leads to the death of women at home, at work, at school and in public is not rare. In England, she said, a woman is killed at the hands of a man every three days.

“Since Sarah Everard went missing, in that week, six women have died at the hands of a primary male suspect, and one little girl,” Phillips said. “That doesn’t sound rare to me.”

Later that day, Phillips stood in the House of Commons reading out the names of the women killed in the U.K. in the last year in cases where a man has been convicted or charged as the primary suspect — a list that consumed four minutes.

News of the Everard investigation coincided with a House of Commons debate for International Women’s Day, prompting numerous female members of Parliament to speak out about the threat of male violence on social media and in government chambers.

Many men also took to social media to express support and ask how they could be better allies for women. Some have used the hashtag #NotAllMen to point out the relatively small proportion of men who are violent attackers, prompting women to reply that it’s still too many.

Much of the conversation has centered on victim-blaming and personal responsibility. One Women’s Equality Party member wrote that women in her area had been advised “not to go out alone” while the investigation was pending and slammed the notion that violence against women should limit their freedom.

Along similar lines, organizers throughout England and Scotland are planning a socially distanced Reclaim These Streets vigil to take place on Saturday night. They wrote on Twitter that “streets should be safe for women regardless of what we wear, where we live or what time of day or night it is.”