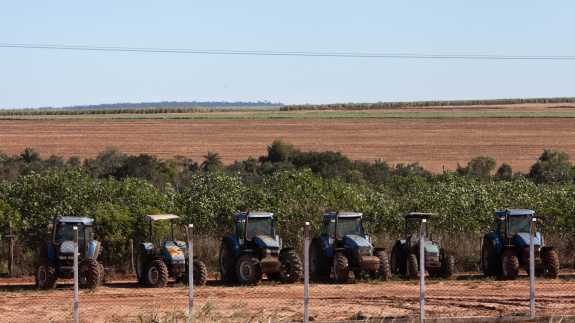 Tractors sit on a sugarcane plantation on the land of a Guarani-kaiowá indigenous community in Brazil, where Oxfam has alleged "land grabs" unfairly take land from the poor. The United Nations is drafting voluntary guidelines for "responsible investment in agriculture and food systems" in response to concerns about "land grabs."
Image credit: Tatiana Cardeal

Here’s a fine topic for a graduate seminar in anthropology: What makes food culturally acceptable? Cue discussions of values and taboos, tastes and traditions.

Now make room for diplomats and lawyers, because this question has popped up, improbably, during international negotiations at the UN’s Food and Agriculture Organization in Rome.

The FAO’s member nations are drafting voluntary guidelines for “responsible investment in agriculture and food systems.” It’s a response to concerns over “land grabs” — big-money investors buying up farm land, often in Africa, where ownership of land sometimes is unclear. In some cases, these investors have displaced small-scale farmers, leading to protests and even violence.

The new guidelines are supposed to clarify the difference between responsible and irresponsible agricultural investments. Responsible investments, according to the draft guidelines, will increase “sustainable production … of safe, nutritious, diverse, and culturally acceptable food.”

When this phrase went into the draft back in May, no one seemed to object. But by the time the talks reconvened in early August, it had set off a severe case of indigestion in the U.S. delegation.

The U.S. “was concerned that it could lead to some barriers to trade,” says Doug Hertzler, who participated in the talks representing the anti-poverty group ActionAid. (Several U.S. officials didn’t respond to our request for an interview. One wrote in an email that “these are ongoing negotiations so it would be premature for me to discuss them.”)

According to others involved in the negotiations, U.S. officials did not say which foods they feared might be unfairly singled out as culturally unacceptable. Some speculated that the U.S. was worried about restrictions on genetically modified foods.

In any case, American negotiators demanded a definition of culturally acceptable, and they offered one: “For the purposes of this document, consumers, through the free exercise of their choices and demand, determine what food is culturally acceptable.” In other words, as long as somebody wants to buy it, it’s fine.

That market-based definition didn’t go over well with others. ActionAid and other activist groups pushed for a definition that recognized the right of indigenous communities to maintain their traditions.

A representative from Uruguay described the importance of sheep herding in his country, suggesting that agricultural investments that undermined these communities might violate the guidelines. Meanwhile, some majority-Muslim countries in Asia and Africa “were concerned about pork,” and potential pork production facilities, says Hertzler, who, as it happens, got his Ph.D. in anthropology.

In the end, the African delegations struck a deal with the U.S., and their language is in the current version of the guidelines, which are still under negotiation. According to this compromise, culturally appropriate food “is understood as food that corresponds to individual and collective consumer demand and preferences, in line with national and international law.”

Elegant and memorable, it certainly is not. Heather Paxson, an anthropologist at MIT who teaches a course on food and culture, chuckled when she heard it. But Paxson is happy that government officials are recognizing, however awkwardly, that food is “much, much more than a nutrient delivery system.”

Hertzler says that he and his colleagues barely noticed the phrase when it first appeared in the draft guidelines in May. They had other priorities. They wanted the guideline to focus, for instance, on the crucial role of investments by small-scale farmers, not just multinational companies.

But the phrase “seems important now,” he says. It points out that food should be adequate “in a number of dimensions, one of them being cultural.”

The guidelines will be discussed and perhaps approved at the next meeting of the FAO’s Committee on Food Security in October.