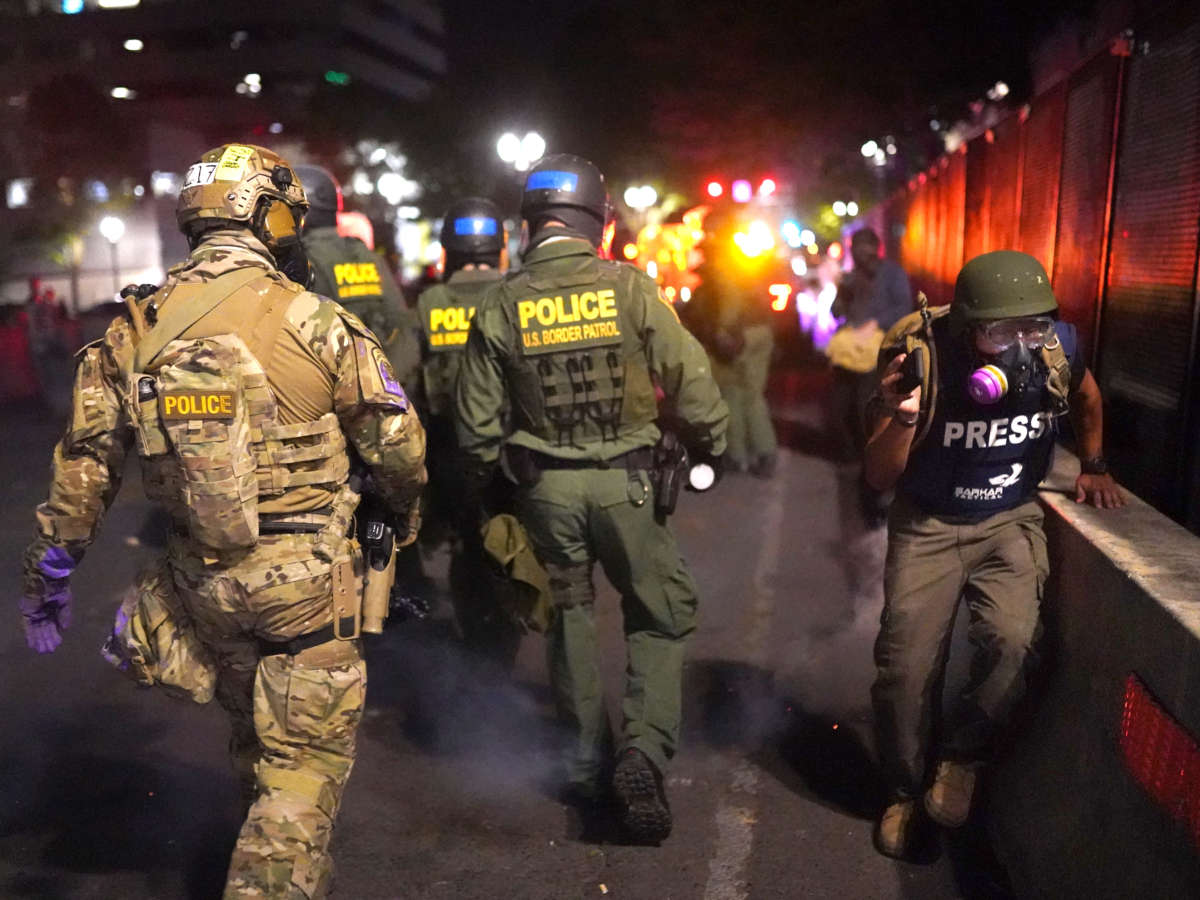 A journalist runs past federal officers after during a protest against racial injustice in front of the Mark O. Hatfield U.S. Courthouse on July 30, 2020 in Portland, Ore.
Image credit: Nathan Howard

The Department of Homeland Security has reassigned its top intelligence official, according to media outlets, following news that his office compiled intelligence reports on journalists and protesters in Portland, Ore.

Brian Murphy, who has been the acting undersecretary for the department’s Office of Intelligence and Analysis, was removed from the position, according to the Washington Post, which was first to report the news.

In the days leading up to Murphy’s removal, The Post broke news that the DHS had circulated three “Open Source Intelligence Reports” to federal law enforcement agencies. The publication says the reports describe tweets from two journalists — a reporter for The New York Times and the top editor of the blog Lawfare — “noting they had published leaked, unclassified documents about DHS operations in Portland.”

Murphy has reportedly been moved to an administrative support role within the department’s management directorate.

The call for Murphy’s removal was made by acting Homeland Security Secretary Chad Wolf on Friday, who, following the Post’s revelations, instructed the office to stop collecting information on the press and ordered an investigation into its proceedings.

In another intelligence report, according to the newspaper, the DHS had tracked and documented exchanges between protestors found on the Telegram messaging app.

Murphy had previously denied his office had access to protesters’ devices and messages, according to the Post.

House Intelligence Committee chairman Adam Schiff issued a statement Saturday saying the committee had been conducting an investigation into Murphy and the Office of Intelligence and Analysis for more than two weeks before the reassignment.

“In light of recent public reports, we are concerned that Murphy may have provided incomplete and potentially misleading information to Committee staff during our recent oversight engagement, and that the Department of Homeland Security and I&A are now delaying or withholding underlying intelligence products, legal memoranda, and other records requested by the Committee that could shed light on these actions,” Schiff said.

He added that his committee would be “expanding” its oversight in the coming days.

Murphy’s removal fuels criticism around the DHS, which has been under heavy scrutiny in recent weeks for its use of federal officers at Portland protests. Agents from various departments within Homeland Security were deployed to the city to protect federal property during the ongoing protests for racial justice sparked by the police killing of George Floyd.

The federal agents have clashed with protesters. Earlier in July, Homeland Security Acting Deputy Secretary Ken Cuccinelli acknowledged that federal agents had used unmarked vehicles to pick up people in Portland. He said the action was meant to keep officers safe and away from crowds. He later said in a letter to Democrats on the House Judiciary Committee that his office would be investigating allegations that law enforcement officers from his agency “improperly detained and transported protesters.”

On July 23, U.S. District Judge Michael Simon issued a restraining order Thursday preventing federal agents from “arresting, threatening to arrest, or using physical force” directed at anyone they know to be a journalist or legal observer, unless they have probable cause to believe they have committed a crime.