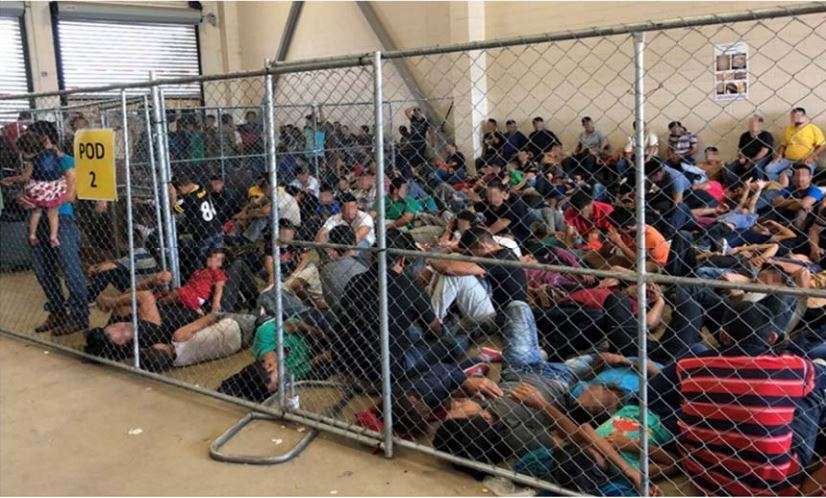 The Inspector General at the Department of Homeland Security observed overcrowding of families on June 10 at a detention center in McAllen, Texas. The OIG issued a blistering report raising concerns that overcrowding and prolonged detention represent an immediate risk to DHS agents and detainees.

The Department of Homeland Security’s Office of Inspector General is warning about “dangerous overcrowding” in Border Patrol facilities in the Rio Grande Valley of South Texas.

In a strongly worded report, the inspector general said the prolonged detention of migrants without proper food, hygiene or laundry facilities — some for more than a month — requires “immediate attention and action.”

The report comes amid growing outrage over detention conditions for migrants and follows reports that migrant children were kept in squalid conditions without enough food and basic necessities in a Border Patrol station in West Texas.

Inspectors from DHS’s Office of Inspector General in June visited Border Patrol facilities and ports of entry across the Rio Grande Valley in Texas, the busiest sector in the country for illegal border crossings.

“We are concerned that overcrowding and prolonged detention represent an immediate risk to the health and safety of DHS agents and officers, and to those detained,” they wrote.

In its response to the report, the Department of Homeland Security says the surge of migrants crossing the Southern border has led to an “acute and worsening crisis.”

“The current migration flow and the resulting humanitarian crisis are rapidly overwhelming the ability of the Federal Government to respond,” DHS says.

In May, according to DHS, an average of more than 4,600 people a day crossed illegally or arrived at ports of entry without the proper documents, compared to less than 700 a day in the same period two years ago.

DHS says Customs and Border Protection facilities are at “peak capacity” and that the agency is adding detention capacity at three tent facilities in order to improve the conditions for migrants. CBP also says it “continues to take steps to address the health and safety of those in custody,” including by expanding medical services.

The inspector general’s office released a report in May describing similarly dangerous overcrowding conditions in Border Patrol cells in the El Paso region.

The latest report from the Rio Grande Valley includes photos of migrants penned into overcrowded Border Patrol facilities — including one man pressing a cardboard sign to a cell window with the word “Help.”

Inspectors found that hundreds of children were held for longer than the 72 hours, the maximum time federal rules allow. In some cases, kids were held for more than two weeks. And some adults were kept in standing-room-only cells, without access to showers, for more than a week.

Inspectors said Border Patrol management informed them there had been “security incidents,” such as detainees clogging toilets with Mylar blankets and socks in order to be released from their cells during maintenance.

“We ended our site visit at one Border Patrol facility early because our presence was agitating an already difficult situation,” the inspectors wrote. “Specifically, when detainees observed us, they banged on the cell windows, shouted, pressed notes to the window with their time in custody, and gestured to evidence of their time in custody (e.g., beards).”