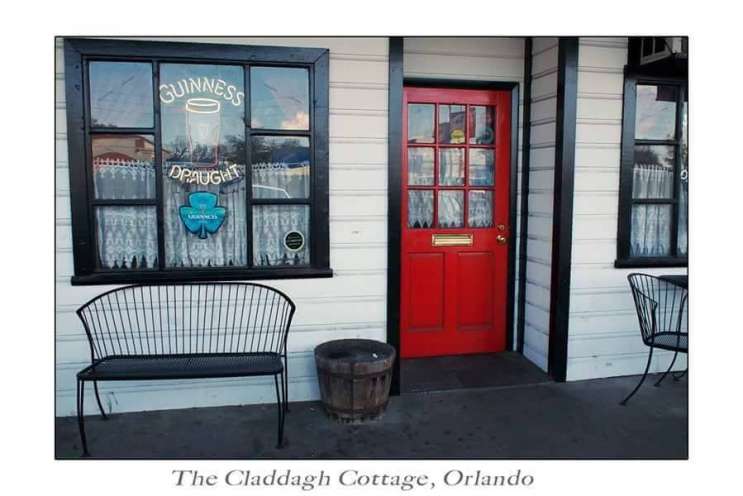 About a dozen musicians gather around a long table in the cramped and dimly lit Claddagh Cottage Irish Pub. Fiddle players line the back wall of a booth with a guitar and banjo player sitting at the head of the table. Woodwind players and percussionists are peppered in between the string plays.

You won’t find a set list or sheet music on that table. Instead, you find pints of Guinness and cottage pies. The guitar player strums a few chords and the rest follow.

The Wednesday music session is just one draw to the pub. It’s garnered its own set of loyal followers whether it’s for the imperial pints of Guinness or Kilkenny, or the steel tipped darts.

Robin Millar is an English ex-pat. During the session, Millar practices his Cricket dart game with a partner – he plays in a league at the pub. To him, the this is more than just a place to play darts. It’s a place to hang out, relax, and escape the day. So much so, he and his wife bought a house close to the bar. “We essentially, and I’m not lying here, we put a map of the Claddagh cottage [with a] a pin and drew a one-mile radius and that was the search area.”

Recently, they found out the long-time owner of the pub was selling it, so they bought it. “We didn’t want it to be changed,” says Vocca, “changed into something that we didn’t believe in, that we didn’t want to have a part of. It’s a family spot, for us.”

Scott quit his job to run the bar, and Vicki came in after work to help out. The two learned how to run a pub together – and they were successful.

But just a few short months after buying Claddagh Cottage, they found out the owner of the strip mall was selling the property and demolishing the pub, along with the surrounding shops like a hair salon and funeral home, to make way for new development. Vicki Gish was floored.

“It was like a kick in the gut,” says Gish. “It was devastating, really devastating. I just wanted to cry all day.”

Nothing stays quiet in a bar for long. Soon, regular customers of the bar found out and so did long-lost patrons of years past. Gish and Vocca want to re-locate, but capturing the essence of Claddagh Cottage will be difficult.

“This is totally different,” says Vocca. “When you walk in here you don’t think you’re on Curry Ford Road and Conway anymore. You forget that. You lose that part of Orlando behind you, and it really is the charm of this that makes it what it is.”

The owners say the landlord plans to give them sixty-days notices to leave – a notice they’ve yet to receive. But they’re actively looking for a new home. And supporters are helping with the expense of outfitting a new pub. A GoFundMe campaign has raised more than $10,000.

Regular customer Robin Millar says he understands the need for new development in the area, but the thought of losing Claddagh Cottage is not easy to grapple with.

“I don’t think a lot of Americans understand what a pub should be,” says Millar. “It’s a public meeting place. You can walk through this door here and you shut the world out from behind you and you come in – and if you’ve been coming here for a while you know half the people in here. And it’s just a place to relax.”

Until it’s time to move the Pub and close these doors on Curry Ford for good, Millar will keep shooting darts and Owners Vocca and Gish say the music will play on.