Despite Cease-Fire, Skirmishes Carry On Along Ukraine’s Front Line 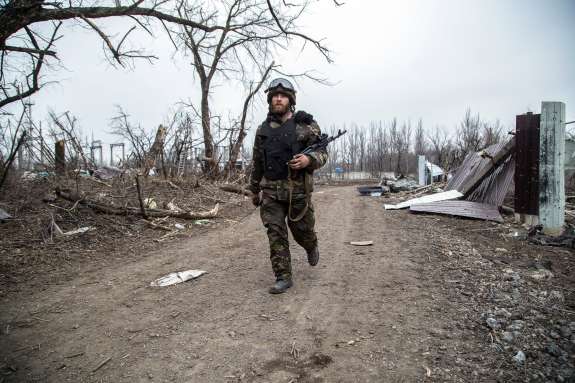 A Ukrainian serviceman walks in the village of Pisky in the region of Donetsk controlled by Ukrainian forces on Feb. 26.
Image credit: Oleksandr Ratushniak

Fighting in eastern Ukraine between Ukrainian forces and pro-Russia separatists has died down after a cease-fire agreement last month. But there are stretches of the front line where shooting has never really stopped.

Near the village of Pisky, for instance, you can hear the dull thud of incoming mortar rounds, coming in sporadic waves.

Pisky is on the Ukrainian government side of the front line, but it’s not far from the separatist-controlled city of Donetsk.

The shelling is more than a mile from a militia camp set up in what used to be a small hotel and cafe.

The fighters aren’t paying much attention to the distant sound. Most of them are more focused on target practice with their Kalashnikovs.

These troops rotate back and forth to the front, and right now, they’re on a break.

Their commander, who goes by the nickname “Mongol,” says the separatists and the Russians have never observed the cease-fire.

“They haven’t stopped shelling,” he says. “They didn’t pull back their heavy artillery, their tanks, their mortars — nothing. We moved all our stuff back 50 kilometers (30 miles), but they didn’t.”

The Organization for Security and Cooperation in Europe says both sides have blocked some access for observers, so it’s not fully possible to confirm that all heavy weapons have been pulled back, or that weapons aren’t returned to the front when monitors aren’t around.

Mongol charges that the separatists and their Russian allies have recently fired cluster munitions, shells filled with bomblets that often scatter and become a hazard to civilians.

Mongol sits with his men in an unfinished log building that serves as his headquarters.

On the wall behind him is the red-and-black banner of the Right Sector, the far-right political group that formed its own armed force to fight in eastern Ukraine.

The Russian media often accuses the Right Sector of being neo-Nazi and fascist, charges that Mongol shrugs off.

“Patriots, we’re just patriots. They say we eat kids, and all that, but it’s just lies, and any sane person understands that,” he says.

Mongol says the reason he joined the Right Sector militia is because it was the unit that was always closest to the front.

The fighters say they’ve been taking casualties nearly every day since the cease-fire officially began about a month ago.

The Fighting Goes On

The wounded come first to a makeshift medical station that is run by a cheerful woman who goes by the nickname “Mama.”

“We get guys from the front line here, with concussions or shrapnel or gunshot wounds,” she says. “We stabilize them and send them on to a hospital.”

The “station” is actually an old ambulance, donated to the region years ago by the fire department in Fairfax, Virginia.

And Mama is a 47-year-old grandmother who worked as an anesthesiologist at a maternity hospital before the war.

She says she came to Pisky to be close to her son and husband, after they joined the Right Sector as medics.

“Our whole family’s here,” she says.

Mama knows the risks. Not long ago, she says, she saw her son drive up and deliver a wounded man. The tires on his car had been shot out, and he was driving on the rims.

She watched as he got into another car and drove right back to the front.

Some of the medical treatment at the front is given by two Ukrainian Orthodox priests, striking figures in long black cassocks, with camouflage jackets and helmets.

“It would be hard to be here without faith,” says Father Olexandr Golovchenko. “If you just look with physical eyes and put God away, there’s no hope. If l look with God’s eyes, there’s hope everywhere, and even when guys are dying, no one dies in vain.”

Vain or not, more than 6,000 people have been killed in a year of fighting in eastern Ukraine, and the shooting goes on.